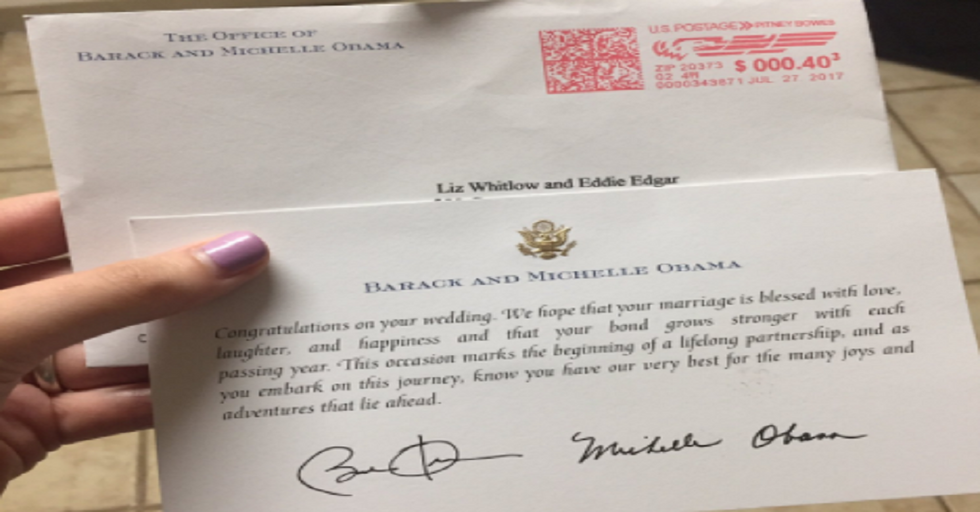 Regardless of how you feel about his politics, Barack Obama is a classy guy. He and wife Michelle were known for being pretty in touch with today's generation and when someone sent them a wedding invite, they responded thoughtfully, giving one lucky bride a story for the ages.

Brooke said her mom sent the Obama's a wedding invitation, and they actually responded.

The letter basically wishes them well in their marriage in the typical, Obama-smooth fashion. Imagine getting home from work and seeing you have a letter addressed to you from Barack Obama!

When Brooke showed her mom, she had a classic response.

Maybe she just didn't have the address of Trump's Mar-a-Lago golf course, which is a pretty good way to reach him.

That'll be pretty cool to show the kid when he's older! I wish I got a letter from Bill Clinton when I was born. You'll notice the letters change, which means they're doing different versions of these!

The responses are extremely varied, from weddings, to births, and even to graduations.

It has to be pretty inspiring as a high school student to be congratulated by an actual President of the United States.

One of the coolest things about these letters is how unique they all are.

So at least someone is putting some effort into them, even if it might not actually be the Obamas themselves.

They continue to send out letters to this day.

I suppose they have a bit more free time now, but it's still pretty awesome.

Some users wanted to know how they can get a response from the former President.

Seems pretty simple on the surface, but you might also need some luck on your side unless he's sending out thousands of these things.

Others just couldn't get over the fact that the former President responded.

The letters are pretty inspirational, even if you disagree with his politics.