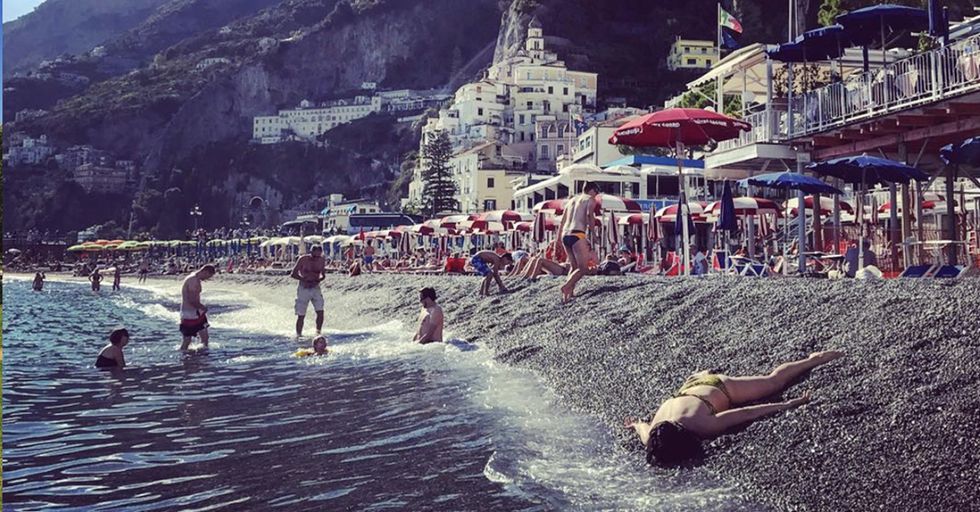 This Woman Takes 'Anti-Selfies' of Herself 'Dead' at Famous Landmarks

It has become a given that when traveling, you take photos of yourself next to famous landmarks. You probably post them on social media. You probably refresh your phone waiting for likes and comments. One artist is trying to challenge this humdrum idea in quite the creative way.

STEFDIES is a "photographic performance series" full of "anti-selfies," photos of the artist lying face down on the ground or the floor, "dead" in different situations or in front of famous landmarks around the world. The photos are meant to provoke a discussion about mortality and about how photography, particularly of the self, functions in our minds. When we take a photo of ourselves, we should be focused on retaining the memory, on the actual experience. STEFDIES photos remind us that the moments we capture are precious and should be savored while we are still alive and able to appreciate them. You'll see what I mean when you look at the photos...

I don't know how she does it, but you will see. In each and every photo, she looks like...actually dead. She doesn't look just like she's napping or relaxing.

This picture is not doing my intense fear of drowning any favors. But look at that water! It's so clear and blue!

This is a bit of a Where's Waldo situation, but you should be able to find Stef in the lower lefthand corner of the photo.

Ah, there is nothing as peaceful as lying on the beach, listening to the sound of the waves crashing into the shore.

She's a bit hidden in this one too, but that lower lefthand corner is where she's at. But also, now I want to go to Sardinia. The next one is truly gorgeous...

This is making me want to visit Spain and also to not die by falling down a mountain. That would be really painful.

I bet this was an unusually cold one to shoot. Iceland is the hot (well, cold) new vacation destination. I'd love to visit someday.

This picture is reminding me of something very specific and that is the beginning of The Hunchback of Notre Dame.

I wonder if she ever gets people approaching her thinking she's actually in trouble. I'd love to see those photos too.

This one is particularly interesting considering the reputation of bridges like the Golden Gate. They get even more interesting...

What a lovely landscape. I'm only sorry Stef wasn't around to see it. Because she died. On the walkway.

Poor Cinderella has been through a lot, and now she has to deal with a dead girl on her carpet. I hope her fairy godmother isn't squeamish.

The Amalfi coast is insanely beautiful and I definitely need to visit someday. Until then, I have this picture.

Um, I didn't know the San Diego Zoo had a petting park where I can become best friends with a bunch of goats. It's perfect.

I hope that she doesn't know this man and he was surprised when he later realized there was a dead person in the background of his photo. There's a lot happening in the next one...

What is that giant cat doing there? It seems entirely unfazed by the dead woman right in front of it.

That dude on the right definitely noticed what was happening but seems concerningly nonchalant about the whole thing.

I know this probably is not the point, but I am loving Stef's outfit in this picture. She looks like a character from Tron.

Not going to lie, I have been in many a doughnut shop where I've been so overwhelmed by choices I just wanted to lie down on the ground. I'm supremely jealous right now.

What an incredible building to lie down dead in front of! At least the woman walking by looks genuinely concerned. The next one is pitch perfect.

This photo is amazing. She's dead while a triumphant group is taking a photo off to the side. How she decides the perfect moment to take these pictures is a total mystery to me.

Oh, that seems like a very dirty floor. Anything for art, I guess, right?

I love the juxtaposition in this photo. A lovely garden, a literal amusement park, and death. All in the same place.

That poor clown has probably never been upstaged before someone pretending to be dead before.

This one is especially timely considering the fire that just happened. A good reminder to appreciate what we have while we have it. She's still going!

OK, so not every one of them takes place at a historical landmark. Sometimes they happen in the parking lot of the emergency room.

No one probably stopped while she took this picture because she probably just resembled a very tired runner.

Santa's really good at bringing toys to every child in the world in one night, but I don't know if he knows CPR.

Side of the road

This is the picture that started it all! How fascinating. Share with someone who appreciates performance art like this!