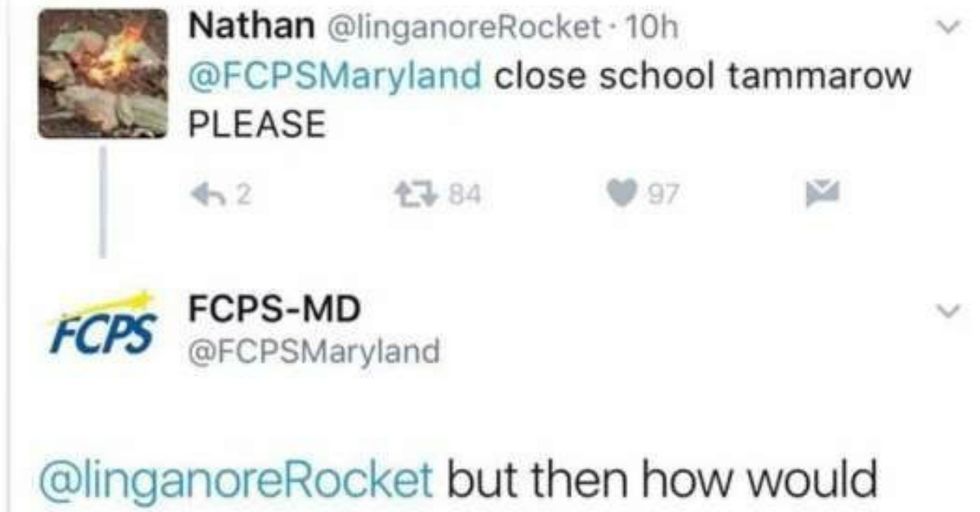 This Woman Was Fired For Correcting a Student's Spelling On Twitter

She meant for the tweet to be funny. But her employer wasn't having it.

These days, social media can make you or break you.

What do you think about this? Should she have been fired?

Katie Nash was the Web Experience Coordinator for Frederick County Public Schools in Maryland until one tweet got her fired.

The school district was preparing for a snowy day on January 5.

So of course, students began tweeting at the school district's handle pleading for the day off.

And Nash responded from the district's handle, "but then how would you learn how to spell 'tomorrow'? :)"

Nash claims the tweet, which got a bunch of responses, was all in good fun.

She meant it to be funny and thought it was the perfect opportunity to engage with the students directly in an informal manner.

School board members didn't see it the same way.

Nash was immediately told to delete the tweet, and then she was given a letter from the district that informed her of her termination. The Director of Communications, Community Engagement, and Marketing for the district, Michael Doerrer, was then sent to apologize directly to the student, who said he had no problem with Nash's tweet.

Since she lost her job, Nash has been spending some quality time at home with her kids.

But there is a petition to help Nash get her job back. Over 13,000 people have signed so far. What do you think? Did the Frederick County Public School district take Nash's tweet too seriously? Or did she step over the line?