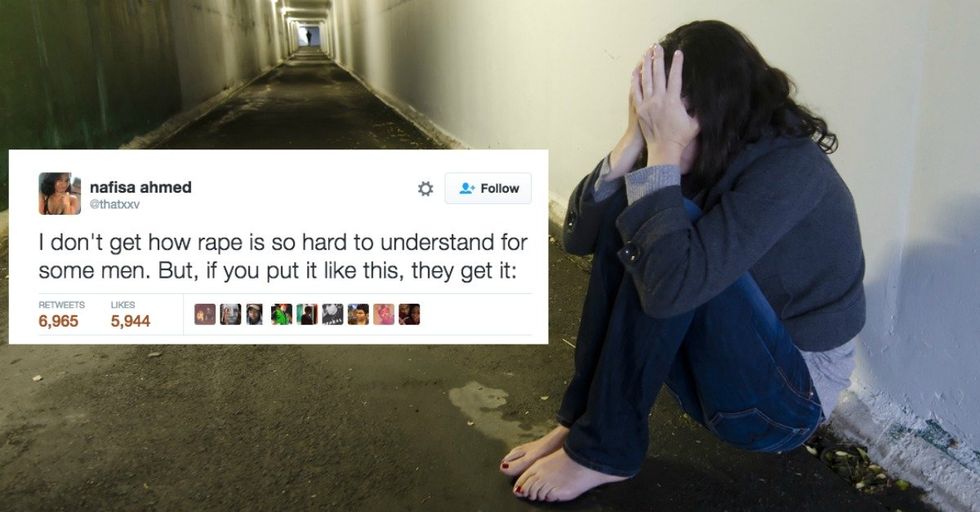 It's really as simple as "no" means "no," but apparently there are people out there who still fail to grasp the concept of consent and sexual assault.

Because of that, Twitter user Nafisa Ahmed decided to break it down with an analogy that anyone with a brain should be able to grasp.

She posits this question to her social media followers.

Using a robbery analogy, she explains that doing something in and of itself doesn't imply consent.

And giving permission for someone to do one thing doesn't mean it's consent for another, different act.

Similarly, you don't need to PROVE a crime happened to be a victim.

Past behavior is no indication that you're waiving future rights, either.

Do you get it? Because it seems many people don't, even in those simplistic terms.

Based on responses, she was able to determine how people view the issue overall.

Rationalization is common, but that doesn't make it right. Not one bit.

People were quick to praise her spot-on analogy.

But with praise came irrational dissent as well. This is the Internet after all. On the next page, see the quick response the Twitter user gave to someone who just wanted to be critical for no particular reason.

It's clear enough, isn't it?

This person offered up a salient point. WHEN will people "get" it?

And of course, there were dissenters. Though their point wasn't entirely clear.

But Ahmed's tweets had her desired outcome — they got people talking, especially men.

It's doubtful that this will change anyone's behavior, sadly, but that's not the point. Not the immediate one, anyway.

It's intended to change the way we view the crime and victims to punish the CORRECT parties. From there, we can work on reforming behavior and punishment. It's a sound approach that seems to have done its job very well.