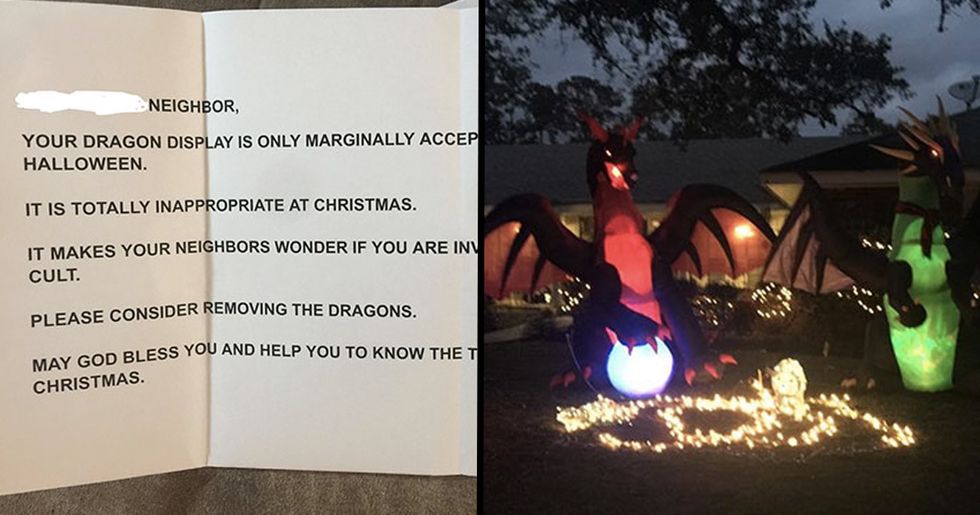 Yep, you read that right. Did you know it was possible to buy dragons for your yard? Well, it is, and they certainly make for a colorful conversation piece!

Plenty of people love the concept of yard-dragons, including author Diana Rowland. In fact, dragons were the star of her holiday setup this year. But while she enjoys her yard-dragons, one anonymous neighbor did not. After receiving a note complaining about the display, Rowland knew she had to change something.

So, what does her yard look like now? Keep scrolling to find out how the whole dragon-debate went down. Rowland has kept Twitter well up to date with the goings on in her yard, and you won't want to miss this hilarious draconian story!

'Tis the season for decorating.

It's that time of year where, anywhere you go, you'll find holiday decorations. Trees, string lights, wreaths...there are a ton of ways to accessorize for Christmas.

And it takes effort.

To set up a whole display for the holidays, you've got to be pretty dedicated to the task!

It's fun to check out what everyone does.

Ever just drive through a lit-up neighborhood to see the decorations in their full glory?

And here's the best part:

Everybody has their own tradition, their own idea of what a jolly holiday display looks like.

It'd be no fun if every display was uniform, right? Part of the joy is reflecting your own holiday spirit on the places you decorate.

Heck, decorate for as many holidays as you want!

Whatever you celebrate, show it proudly through gorgeous decorations!

It feels like the whole world is wishing us happy holidays.

And that's a pretty nice feeling to have on a cold winter day. Or any day, really.

Author Diana Rowland decked the halls this year, but rather than boughs of holly, she put up three colorful dragons in her yard.

And what isn't fun about dragons?

There's a reason we all fell in love with them on Game of Thrones, after all.

But not everybody shared Diana's sense of style.

And hey, if you don't want dragons in your yard, that's fair. But why rain on someone else's parade?

One of her neighbors left a note for Diana.

This generously-named "fan mail" went viral when Diana posted it to her Twitter.

Let's parse that note a bit.

Because one part of it says that the dragon "makes your neighbors wonder if you are in a demonic cult." Really? Three colorful inflated dragons surrounded by regular string lights, and that's the go-to assumption?

Look, the dragons even light up!

And Diana was also confused.

I'm also rather baffled as to how the dragons are only marginally acceptable at Halloween. I guess they think I need MORE dragons??
— Diana Rowland (@Diana Rowland)1544832843.0

Bring on the dragons!

And his response is honestly amazing.

And Diana isn't the only one with dragons in her yard.

Dragons can be festive!

This one is green and red and chewing on a candy cane! What's not Christmas-y about that?

Someone else had another suggestion.

@dianarowland @Popehat I think the problem your neighbor has with the display is that you have three wise dragons,… https://t.co/Km4WBbvUbu
— Joe Cooper (@Joe Cooper)1544973184.0

You've gotta have all the dragons, or none at all! Them's the breaks.

Another Twitter-user had to point out the irony.

Yeah, when you think about it, not many decorations actually reflect the manger in Bethlehem.

Now, some are calling Diana an inspiration.

@dianarowland My neighbors don’t like my Christmas wreath. Next year, I’m taking my holiday decor to the next level… https://t.co/91bgdonGSe
— Betty Landers (@Betty Landers)1544842307.0

Truly, she's a role model for every person who doesn't want a 'traditional' look for the holidays.

Diana isn't the only one with a story of disgruntled neighbors.

A Nightmare Before Christmas setup sounds like so much fun!

More than anything, Diana got an outpouring of online support.

Which was certainly more than she got from her neighbors!

Well, it's no fun living near a Grinch.

But Diana came up with a suitably fun solution to her neighbor's problem!

An update to yesterday's tweet re the letter I received from an anonymous, judgy-mcjudgyface neighbor who disapprov… https://t.co/kC3CaLz9Xc
— Diana Rowland (@Diana Rowland)1544923915.0

Ta-da! Three dragons have become five. It's a Christmas miracle.

Clearly, her neighbors don't know who they're dealing with.

@SamSykesSwears They know not what they have unleashed.
— Diana Rowland (@Diana Rowland)1544924109.0

The dragons of Christmas vengeance have awoken!

And she's teaching others how to get their hands on a dragon.

If dragons became a regular Christmas thing, that'd be great.

Thankfully, Diana hasn't run into too much resistance

@cdkellerson @lizdutch @coachsnowball @HeyItsHigbe Luckily I seem to only have one uppity neighbor. The rest love the dragons!
— Diana Rowland (@Diana Rowland)1545003126.0

Most of the neighborhood is totally on board!

And people have started donating to get her more dragons.

Hi, everyone! I've been getting a lot of messages about fundraisers/collections to buy me MORE DRAGONS, but I would… https://t.co/u3IxvoqUKj
— Diana Rowland (@Diana Rowland)1544974382.0

But Diana had a better idea, and now, she and her fans have been donating money to charity in the name of their Dragon Army!

Making this whole thing really in the spirit of Christmas.

It's the perfect time of year to be generous, have empathy towards others...and love dragons.