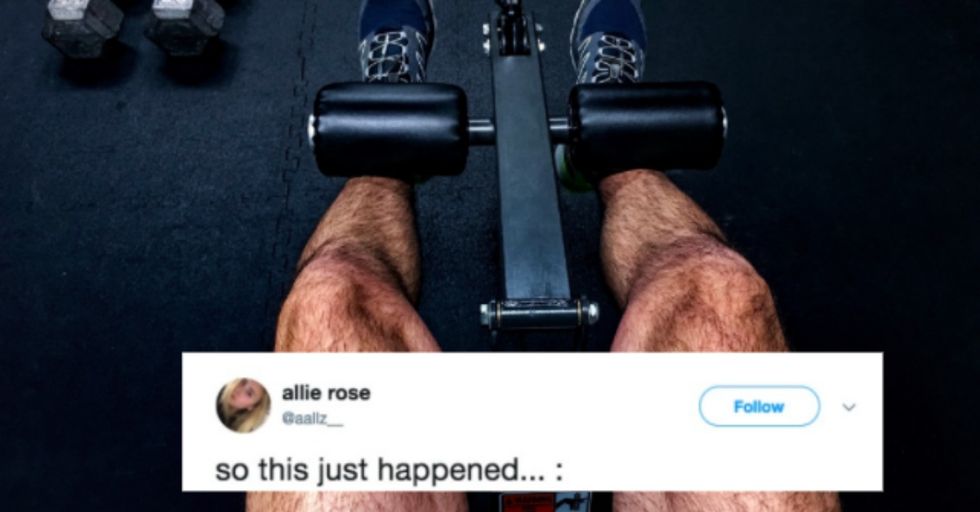 If you've ever been to the gym, you know some gym rats take leg day workouts very seriously.

If your response to that sentence is, "Psh, no one talks about their workouts too much," we hate to tell you this, but you're probably the obnoxious person obsessing to everyone about how many reps you blasted through.

When this Twitter user tried to make an innocent joke about her friend's leg day workout, let's just say it didn't work out.

Her innocent joke that took a turn for the "Yikes!" has over 106,000 retweets and over 415,000 likes. Hmm, seems like leg day is a relatable (and touchy) subject for pretty much everyone. Let's squat down into the details of what made this "haha funny" transform into an "oh nooooooo."

Someone sent Allie Rose this snap:

"Leg day is the best day," her friend wrote. Ah, we see the problem immediately; Allie Rose needs new friends. Friends who won't straight up brag about their workouts on social media.

So she sent back a snap that read, "What legs???" Haha! Funny right? Because her friend is wearing camo leggings! Obviously.

But Leg Day Lucy (that's what we're calling the workout friend. She's probably not named Lucy. Might not even be a she.), well, Leg Day Lucy...didn't get it.

Leg Day Lucy went certifiably bonkers in response to Allie Rose's camouflage joke because they thought it was a dig at their small legs. They lunged into a tirade about all their leggy accomplishments and called Rose a "blind f***ing idiot"!

It's unclear whether Leg Day Lucy ever responded to Rose's joke or if they were so offended that they leg-pressed their thick walkers into a rage-induced muscle tear. Either way, Allie Rose got a leg up on her easily offended friend by making this hilarious exchange go viral, and that's what really matters.