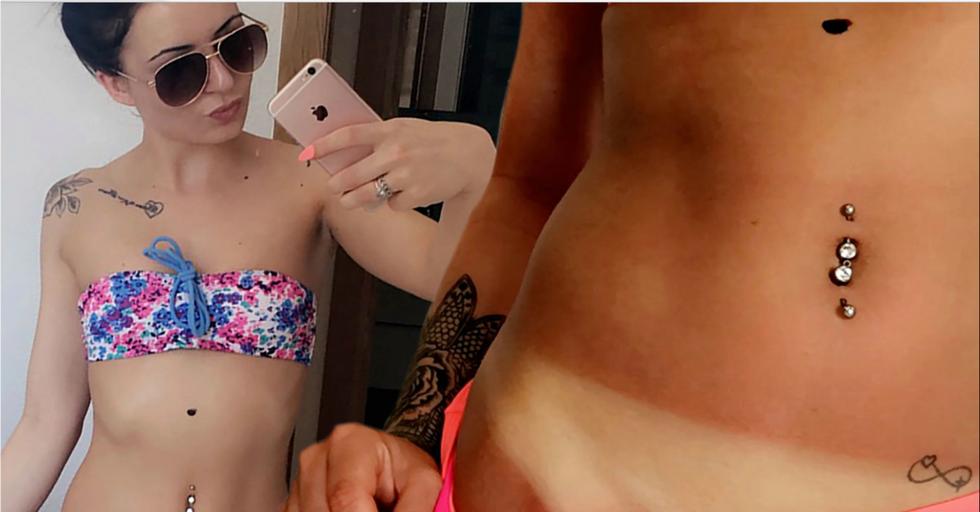 This Woman’s Selfie Might Have Just Saved Her Life

Selfies are as common as clouds in the sky.

Cloe Jordan is a twenty-one-year-old from Wolverhampton, England who, like most people, loves a good selfie.

Last summer she took some selfies to show off her bikini bod, but when she snapped those pics, she had no idea that they would wind up saving her life.

She had a mole on her stomach since birth that she never really paid much attention to. But after a series of selfies, she noticed that the mole looked different than it usually did.

It seemed as though the mole had changed shape.

Because it was making her feel self-conscious, she decided to visit a doctor to inquire about getting it removed. She was surprised by how the physician reacted to the mole. It had grown in size and the color of it had also changed. Cloe thought that this was all normal, but it turns out these changes were not only abnormal, but they were dangerous as well.

In fact, these were all signs of melanoma.

She was shocked to hear the news that it was a cancerous mole. They removed the melanoma, and Johnson is now left with a huge scar because the cancer spread below the surface of the skin.

She is lucky that she went to the doctor when she did.

She decided to share the photo of her scar and her story to help raise awareness.

First and foremost, she wants people to be aware of the dangers of tanning, especially indoor tanning beds that she was using at least twice a month.

"I knew that if by sharing my experiences, it stopped one person from indoor tanning, it would be worthwhile," she said. "I will never lay in the sun again and would much rather stick to a bottle of fake tan or have a spray tan than damage my skin."

But her journey isn't over yet.

The doctors believe that her cancer may have spread more, and she will have to undergo more treatments because of her test results.

So what should you do to keep an eye on your own body?

"I would tell anyone who has any worries over skin changes to get themselves checked by a doctors," she said. "It's better to be safe than sorry."

Moles are normal, so no need to freak out over every single one.

But a normal mole should be an evenly colored brown, tan, or black spot on the skin. It can be flat or raised, round or oval and it should be less than the size of a pencil eraser. If it changes shape or color in any way, that is a sign that it could be melanoma and you need to have it checked.

If your mole has any of these features, have it checked. A is for Asymmetry: If one half of a mole or birthmark does not match the other half. B is for Border: It the edges are ragged, irregular or blurred. C is for Color: If the color is not the same all over. This included shades of brown, black, pink, red, white or blue. D is for Diameter: If the spot is larger than the size of a pencil eraser. Just keep in mind that some melanomas can be smaller. E is for Evolving: If the mole changes in size, shape or color. As she said, better safe than sorry.