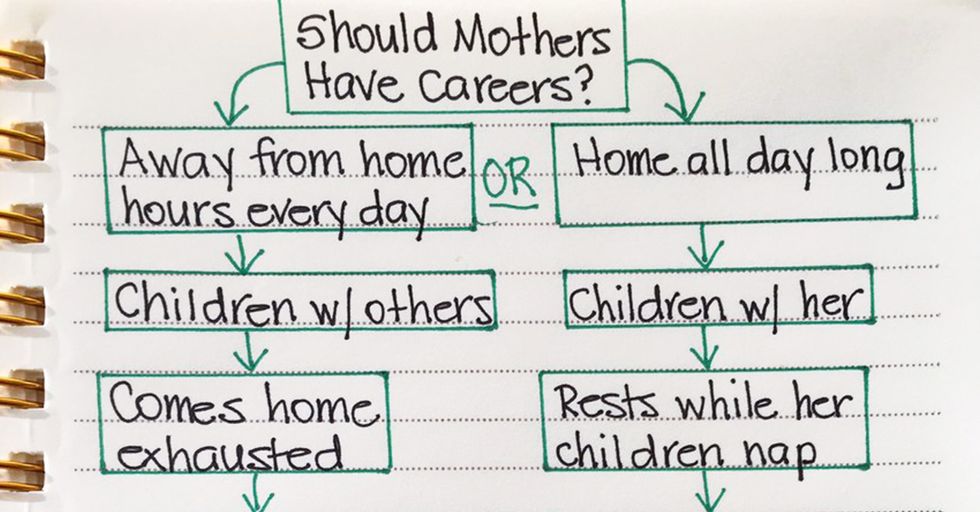 Women are making killer progress in government, business, education and pretty much every aspect of life and it's infectiously inspiring. But unfortunately, there will always be someone ready to drag it all down with vapid and rudimentary ideas that no one has time for.

One woman on Twitter recently shared an outrageous idea stating that mothers should not have careers because it will lead them to have a life that is falling apart. Being a stay at home mom is a wonderful choice, but so is having a full-time career. The days where women have to choose between one or the other are long gone because now, many women boldly do both. It's pretty incredible.

This woman's tweet, which caused some serious backlash online, shows us that some people are living in the past and need a reality check, and fast.

It's 2018 and people still cannot seem to grasp why women feel unheard and often misunderstood.

All of these are common occurrences that happen every single day– especially online.

The good news is that we're moving forward.

There have been many victories that are worth celebrating just this year as women have been elected into more government positions, slowly getting higher salaries and all around using their voices for good.

But still, there are voices that try to diminish women and their power.

Often times people assume these negative voices are only men, but they can be other women, too.

Like one woman on Twitter decided to drag us all back to the 1800s with a profoundly idiotic thought.

Seriously. Who does she think she is?

It started with a simple, yet stupid question.

Yeah, she really did ask this.

I was already exhausted by reading that question, let alone what followed it.

There is no way to prepare yourself for the absurdity that you are about to read.

This is not a joke.

This woman really sat down with a pen and paper and wrote this crazy infographic to prove her pointless point.

And it has the rest of the Internet questioning her sanity.

It's hard to believe that other women believe and support this idea.

I'm worried about her, I really am.

The responses from this tweet were filled with righteously angered men and women.

They called out the blatant sexism and backward way of thinking that was the foundation of this tweet.

We're going to need some time

This woman has some serious self-control– I could easily write an essay in response to what was tweeted.

This woman went off on her!

Yes. One hundred times yes. This woman is my inspiration.

That was the kind of response that ends that argument right in its sexist tracks.

This Twitter user rewrote the flow chart for everyone and it's much better.

Her version is more respectful and realistic, don't you think? We like this one.

Many responses were filled with anger and astonishment at the fact that this woman believes mothers should stay at home and not have careers.

She's got a great point; women who have careers are not neglecting their children in any way.

@laalex2 SAHM here. Most of what my kid eats is microwaved (the baby drinks breastmilk so I’m making that from scra… https://t.co/uSr27ENhDe
— Katie Wallace (@Katie Wallace)1544246367.0

Stay at home moms, or SAHMs, were equally as upset, saying that there are many ways to mother and judging another woman's parenting skills is some serious BS.

Working women who are wives and mothers and actual superheroes fought back by saying they should be encouraged, not shamed, for working while raising their children.

@laalex2 As a working mother my dinners are home-cooked, I always spend quality time with my children after work, c… https://t.co/i1TRNyACnk
— 🇲🇽SaBreezie🇮🇪 (@🇲🇽SaBreezie🇮🇪)1544215594.0

Yes, it's a lot of hard work, but there are so many amazing women who do both and do it well.

These ladies were standing up and speaking out against mom-shaming and blatant sexism.

It's sad to say that mom-shaming is something we need to worry about in this world.

A solid rebuttal from someone who has a dog as their profile picture.

Here are some clear instructions on how to delete a tweet, which is something this woman needs to read clearly and quickly.

"I'll pray for you bc clearly, you need it."

Looney Lori needs to read these responses and take their advice.

Some of the responses were from men that were standing up for working women, supporting them and sharing stories of their own working wives or mothers.

Men standing up and defending women might just be my favorite thing on the internet.

I made the mistake of going through a few of Lori's past tweets and it was a giant, sexist mess.

In one of her articles, she blames college for teaching women to be "feminists, loud, and hateful towards men," and that going to university "promotes sexual promiscuity, abortions, drunkenness, and drugs."

There are not enough words to combat this woman's craziness.

I hope all of her daughters have degrees.

They need to show their mom that the future is female and that females have the right to choose what they want to do with their future.

Another palm to the face.

She came after leggings. She really did!

This is a simple response, but for some reason, I don't think Lori is going to understand it.

Leave my leggings out of this!

I will wear them as pants and as pajamas and as whatever the heck I want to.

Ladies and gentlemen, if we learned anything from this experience, it's that no one likes a Lori on Twitter, or in real life.

Women supporting and encouraging other women is one of the greatest tools we have in having our voices heard.

There is no forward movement in our fight for equality without a support system of other women cheering us on.

But do share this article with your friends and start more positive trends of encouraging and uplifting other women. Shaming other women is a thing of the past, so let's keep it there.