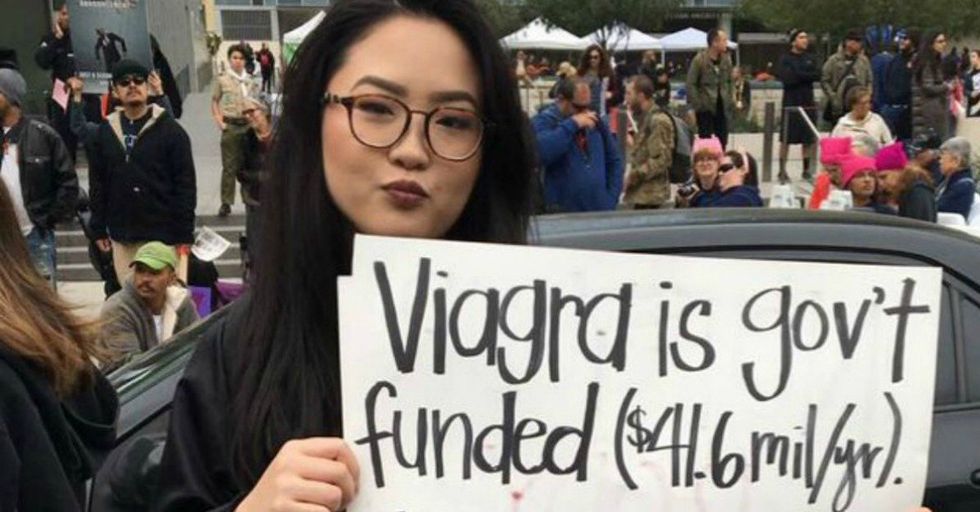 International Women's Day brought forth hundreds of thousands of women marching for equality, and one of the biggest divides in this country is that between affordable healthcare for men and women. With the new administration, funding to Planned Parenthood is set to be drastically cut, meaning thousands of women won't have access to birth control, mammograms, etc.

There are many — such as the current Vice President — who are against family planning because it's "God's Will" so they want Planned Parenthood defunding, but have no problem using tax dollars for Viagra.

Here is is up close and personal.

It sparks an interesting discussion that includes the fact the Department of Defense spent a whopping $84.24 million on erectile dysfunction drugs in 2014.

To be clear, the point of her sign wasn't that she wants to defund erectile dysfunction drugs. She just wants to know why caring about men's sexual and reproductive issues are more important than women's.

Her tweet sparked a wave of information, like the insane double standards when it comes to medical pricing between men and women.

To expand on this, Viagra and equivalents are sometimes used by women as heart medication as it helps open up ones arteries so to speak and promote better blood flow. According to this doctor, however, if a woman needed Viagra as a heart medication it would cost $700. For a man who's got erectile dysfunction? $20.

There were those who had a really big problem with her sign and the message.

Others tried pointing out the flaws in Tammi's logic.

But she came back with this:

Where do you come out on this?