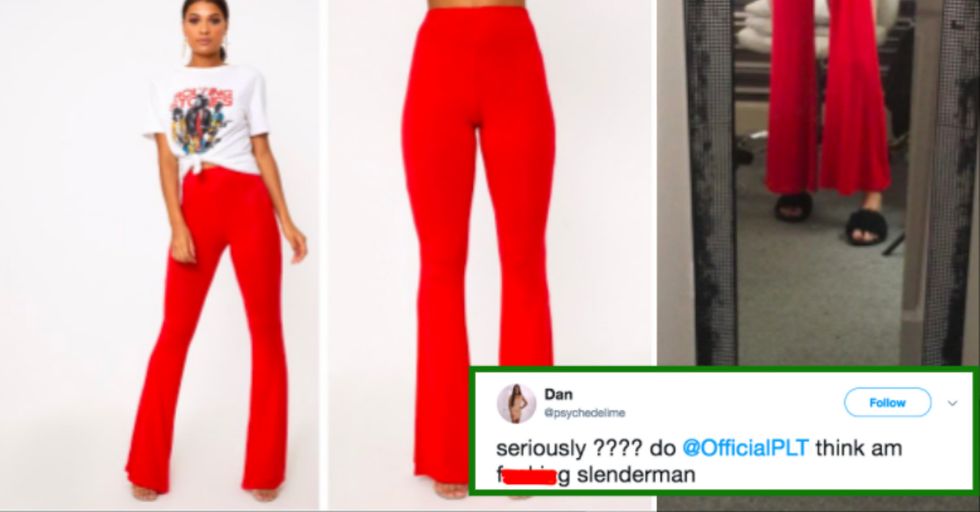 When you take advantage of the convenience of ordering things online from the comfort of your own home, you're taking a risk. Sometimes the dimensions are completely not what you're looking for. Sometimes the object is actually full of marijuana! Sometimes you just don't like the sweater or whatever, and then it's just taking up space in your house forever because you don't want to leave your house to go to the post office and return the dang thing.

But sometimes, your hilarious mistake can go viral on the Internet. And that makes it slightly worth it, right?

It's easy to see why someone would want to buy a pair of red flare pants. Here's a picture of Kourtney Kardashian rocking a similar pair of trousers:

Twitter user @psychedelime ordered herself a pair of the red flares. Once they arrived at her door, she quickly noticed something strange.

Namely, that the pants were made for someone with legs that go up to their armpits. Or someone who wears stilts every day.

Obviously, she was a bit put out by the whole affair.

Although if you think about it, she basically got two pairs of pants for the price of one, which is actually a pretty great deal. Sure, she can't wear either pair, but that's online shopping for ya!

Here's another angle of the pants (this time she actually put them on).

Yup, those are totally, completely, 100 percent unwearable. Unless you're really into the flipper look. As it turns out, @psychedelime isn't the only person to have encountered The Pants...

Apparently, there's a whole Sisterhood of the Too-Long Pants.

We're not sure who thought making these pants was a good idea, but we have to admit we're kind of glad they exist. It's good to start your day with a hearty laugh, right?

If you tried to cuff these pants, there'd be more cuff than pant leg.

It would also completely destroy the whole flare effect. What would Kourtney Kardashian do in this situation? To be fair, she probably wouldn't spend $15 on a pair of pants in the first place, but hey. Here we are.

Here's a look at the pants in action:

Bless the person who decided no only to don the pants but to take a video of her (attempting) to walk in them. She's the hero we need.

Someone made the mistake of trying to fix the situation by recommending people just wear heels.

But come on. There's just no way. They don't make heels high enough to fix whatever is going on in that garment. Those pants were not made for anyone, heels-wearer or no.

As it turns out, the issue isn't limited to just red pants. Here's another woman who ordered a pair of pants that ended up being nearly as long as she is tall:

Pretty Little Things appears to have taken the infamous flare pants off the market for now. We assume they're now taking lessons in human anatomy.