This Year's Oscar Nominations Are Record-Setting, but Not in a Good Way | 22 Words 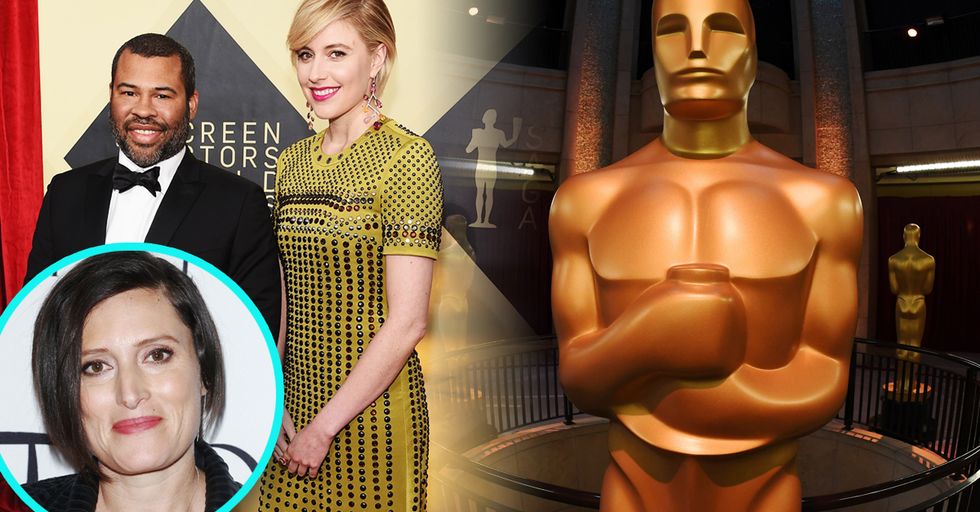 This Year's Oscar Nominations Are Record-Setting, but Not in a Good Way

The nominations for the 90th annual Academy Awards were released this morning to immediate and varied reactions (The Boss Baby?! No Martin McDonagh?! Woo Get Out!).

Several nominations this year have made history in one way or another. But should we be celebrating the breaking of barriers that should have been felled a long time ago? Are these record-setting nominations something to celebrate, or are they just a stark reminder that it's 2018 and we still have a long way to go?

Jordan Peele has broken all sorts of records with his nominations for Get Out.

.@JordanPeele becomes only the third person to receive best picture, director, and writing #OscarNoms for his first… https://t.co/CzcdSFgZiG
— Variety (@Variety)1516719940.0

Let's just take a second to appreciate that a horror movie has been recognized like this. OK, moving on. Peele is only the third person ever to be nominated for director, writing, and best picture for his first feature film. That's already quite a feat.

But it's even more extraordinary when you consider that he is one of the only black directors ever to be nominated in the history of the Oscars.

Five. There have been just five black directors nominated for the award in the 90 years of the show, and zero have won. While it's about damn time and Jordan Peele is super deserving of the honor, why is this still a streak that has to be broken?

In similar news, Rachel Morrison became the first woman ever to be nominated for cinematography.

You heard that right. The first woman ever in Oscar history to be up for the cinematography award. It's 2018. This should make you proud and furious at the same time.

Greta Gerwig is just the fifth woman ever to be nominated for the Oscar for best director.

With her nomination this morning for LADY BIRD, Greta Gerwig is only the fifth female Best Director nominee in hist… https://t.co/lwIDGFwJis
— TIFF (@TIFF)1516716237.0

Do you know how many nominees for best director there have been in the history of the Oscars? So many, is the answer. Only one woman has ever won the award — Kathryn Bigelow for The Hurt Locker, and with those stats, her win was an incredible victory.

In other record-breaking news, Meryl Streep topped her own record with her 21t acting nomination for The Post.

Sure, Meryl Streep is a great actress. But can't you just visualize the disparity between the number of nominations she's received and the number of female directors and black directors and female cinematographers there have been in the entire history of the award show? Streep keeps racking them up, meanwhile...

Octavia Spencer was nominated for her performance in The Shape of Water, which means she's tied with Viola Davis for the most nominations for a black actress.

.@octaviaspencer has now tied @violadavis with the most nominations for a black actress and also like Davis, has re… https://t.co/kxiZ5iTVqt
— Shadow and Act (@Shadow and Act)1516717861.0

Three. Three nominations is the record for any black actress, and Meryl Streep has 21. This is a problem. This is why April Reign started #OscarsSoWhite — to point out the shocking lack of diversity that has plagued Hollywood, and particularly the Oscars, for so long.

Obviously, it is A Good Thing that Jordan Peele and Rachel Morrison and Greta Gerwig and Octavia Spencer were nominated for these awards.

It is important for these barriers to be broken. It'll be even better if they win. But it's also not wrong to criticize the fact that these barriers existed in the first place, that it's taken until 2018 for people of color and women to be recognized in this way.

And it's important to recognize that even if this year's nominees are more diverse than last year's, there are still a heck of a lot of groups that continue to be left out of the conversation.

Define "very diverse," Vicky. How many women were nominated in gender-neutral categories? How many Latinx folks wer… https://t.co/bggSfmKWyH
— April (@April)1516722820.0

#OscarsSoWhite isn't just about giving more black people a seat at the table — though that remains extremely important. It's about representing people of all colors and women and LGBTQ+ folks and differently-abled people.

Yeah, this might have been a step, but there is so much more work to be done.

This year, women tore down barriers and black nominees broke records. But there is still a shocking lack of Latinx representation at the Oscars and in Hollywood at large.

It's important to celebrate the strides we've made, but it's perhaps more imperative that we highlight the ways in which these moves are not enough.

That's what #OscarsSoWhite is all about. Not just seeing the progress, but ensuring that folks in positions of powe… https://t.co/kJsuGiFShR
— April (@April)1516723540.0

This isn't meant to be a "we're all terrible and racist and we're not as good as we think we are" post (though that's pretty true). As April wrote in the above tweet, this is about holding people in positions of power accountable for continuing to improve and challenging them to keep working to fix the problem that is representation in Hollywood.