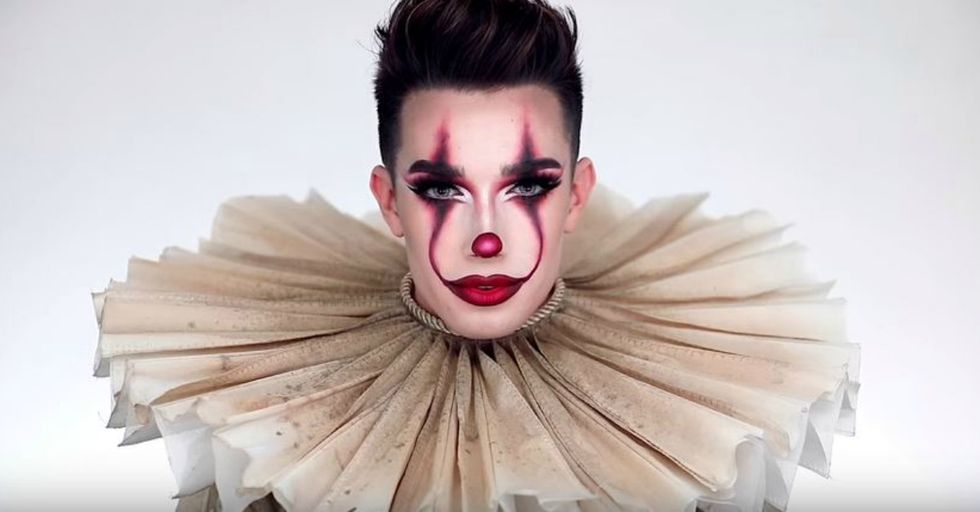 Ready for some drama that will temporarily distract you from the unending horror show going on in the world? Well, you're in luck, because we've got some! And it's so good, even if it does involve a bunch of teenagers who we've barely heard of.

If you're under the age of 30, you've probably heard of YouTube sensation James Charles.

He gained a cult following for his insane makeup tutorials, and, in October of 2016, became the first male spokesmodel for CoverGirl at age 16. Oh, and his YouTube channel has 1.8 million followers. No big deal. So when he tweeted two since-deleted tweets about hating the new IT movie, the internet had a lot of feelings about it. Here's what the original tweets said: "Okay five minutes in and IT is already awful. Stay tuned for updates." "This movie is so predictable I've been texting @beechloren02 what I think is gonna happen next & I've been right every single time so far."

While a lot of people had mixed responses, one comment came from a user with a surprisingly familiar face.

Finn Wolfhard, who played Richie in the movie, added this (very astute) point in response. And people went insane. Tons of users posted clapping emojis and expressed their frustration at people who ruin other moviegoers' experiences by being on their bright phones the whole time.

At first, Charles tried to play it cool.

He mentioned being "dragged" by the famous actor, which is apparently a young-person term for being "dissed" or "called-out," as we used to say back in the day. (Is it not cool to say "dissed" anymore?)

Charles also tried to give the movie a compliment, while sticking with his original opinion of it.

It was a FANTASTICALLY made movie. I went into it expecting to be more horror & was disappointed when I wasn't scar… https://t.co/ACRGGI5vp0
— James Charles (@James Charles)1505022718.0

This tweet came in response to another Twitter user asking: "Okay but I don't understand how you didn't enjoy it? Maybe it didn't scare you but didn't you at least laugh your ass off? It was so funny." More users called him out on his somewhat harsh use of the term "awful" in his original tweet. Who knew IT would be such a touchy topic for the Internet?

Then, in response to what Charles described as "all the drama" his comments caused, he posted this selfie video in the backseat of an Uber.

It starts out with an apology to Wolfhard and everyone involved in the making of IT and takes back his initial use of the word "awful" to describe the film. He then goes on to express his disappointment with it not being "scary" enough, as he was expecting more "jump scares" and less plot development.

But, even with the heartfelt apology, Twitter users would NOT let it go.

can people please shut up about using your phone during a movie? there are more important things to worry about like, idk, the world ending
— James Charles (@James Charles)1505124101.0

Charles continued to get floods of tweets condemning him for using his phone in a theater. While we can understand where they're coming from, it seemed like an over-the-top response to something that, in reality, was not a big deal.

Then, just when we thought all the drama had finally passed ... THIS happened.

Charles posted a makeup tutorial for Pennywise, the evil clown from IT. Titled "IT PENNYWISE GLAM HALLOWEEN MAKEUP TUTORIAL", the video was posted on October 8 and has so far received nearly 1.3 million views and 83,000 thumbs ups.

While many internet users seemed to like the video, another oddly familiar face was not as enthused.

Wyatt Oleff, who played "Stan" in IT, tweeted a sarcastic comment criticizing the YouTube star for seemingly exploiting a film that he originally deemed "awful." And so, with a single tweet, the drama was reignited.

But it turns out it wasn't as much fun to watch this time, as Twitter users basically just started harassing Charles nonstop.

It got to the point where Oleff felt the need to post a comment telling people to knock it off and leave Charles alone, to which Charles responded, "thank you, sister." Aw!

That seemed to have vanquished the drama for now.

Though Oleff was quick to change Charles's "sister" comment to "brother." But, in true social-media-star style, Charles quipped back with the best IT-themed comeback of all time: "We're all sisters down here." We'll keep you posted on any further drama-related developments, which, let's be honest, we really hope there are.