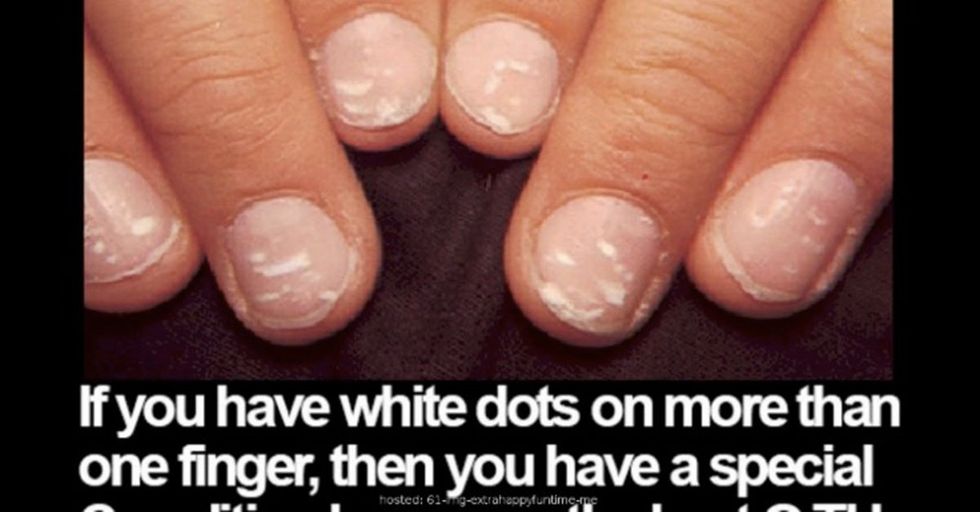 You might pay attention to your nails and keep them in good shape, but have you ever noticed THESE before? Or what they mean?

Manicures are no longer just for the rich and pampered.

People spend a lot of time taking care of their bodies, especially their hands, but that doesn't mean there are weird little things going on right under your nose. If you get a natural manicure, you might know what we're talking about.

But if you do color?

It might be a case of "out of sight, out of mind."

If you pay attention to your nails, you might occasionally (or frequently) notice little white spots on your nail bed.

They don't look like much, but they can often be a message from your body letting you know something's going on. It's usually no cause for alarm, but depending on the pattern, they can sometimes indicate a serious condition, so take a look and see how yours stack up.

They have several nicknames, including "kisses," "wishes," or even "gift spots."

Their medical name is leukonychia (hence the nicknames).

They don't go away quickly, and they're burdensome to many who get manicures. But where do they come from?

They're normally benign and often just indicate a sort of bruise on your nail bed.

If you hit or pinch your finger, they can appear, then stick around for a month or longer. Some say it's the result of a nutritional deficiency, but there's little to back that up. Some people are genetically predisposed to getting these more than others, though. The spots don't really heal as much as they do just grow out with the nail, which is why they move and take so long to disappear.

They'll find their way out, but it takes time.

Most of the time, the only thing you really need to deal with these is patience.

But they CAN indicate a more serious issue.

And it's hard to spot the difference between the benign ones and the bad ones.

But there are differences.

When they indicate something worse, they generally appear with double white lines running across the nail. Those are known as Muehrcke's lines. These spots do indicate malnutrition. They can also appear in the event of kidney or liver disease.

Then there are Lindsay's Nails, which are also called "half and half" nails.

They show up as white on the bottom, but brown on the top. These are a strong indicator of kidney disease. ...and more...

Then there are Terry Nails, which look like Lindsay's Nails, but contain more white at the bottom, and only the tip of the nail is brown.

These can be indicative of type 2 diabetes, HIV, and heart disease.

These are just indicators, and far from a diagnosis, but if you see anything troubling or unfamiliar on your fingertips or elsewhere, don't hesitate to reach out to a doctor to get an opinion.

Even if it's not serious, you'll feel better knowing for sure, right?

I mean, we all suffer from random bruises elsewhere.

It would make sense that they appear all the time on our fingers and hands, which we use all the time.

This isn't meant to scare anyone, but rather just inform. Chances are, they mean very little.

Well, other than "be careful about bruising your fingers."

But if it persists, or is especially painful, you might want to show it to someone who knows more about these matters.

It could just be that you're prone to them. But there's only one way to really find out. Hit up a doctor.