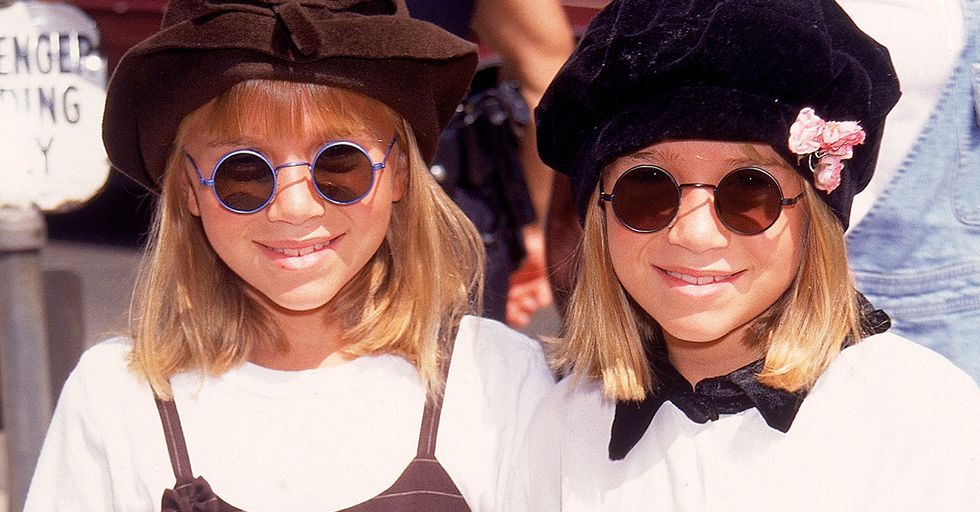 If you were a kid growing up in the '90s, chances are that you watched It Takes Two so many times that you had the entire movie memorized.

My sisters and I worshiped Mary-Kate and Ashley Olsen, so when this movie came out, it was on a constant loop in our household. The food fight scene! Kirstie Alley being so darn likable! Steve Guttenberg serving up those hot dad vibes!

Here's the thing: when I decided to re-watch It Takes Two as an adult, I was scared. What if it wasn't as great as I remembered? Could my fragile, nostalgic heart take it?

Here are some thoughts I had upon a re-watch. And spoiler alert: IT HOLDS UP. SO MUCH.

The movie skates over some pretty serious things.

Mary-Kate's character, Amanda, is an orphan living in New York City. At one point she tells Kirstie Alley's character (Diane) that nobody wants to adopt children who aren't babies. This is devastating. The movie is a light-hearted children's film, and yet this scene between the two of them was gut-wrenching.

This movie really wants you to know that apparently, you need a mom and dad to be a real family.

They literally say it so many times.  Kirstie Alley's character, Diane, can't adopt Amanda because apparently she doesn't make enough money and she's not married. And Steve Guttenberg's character's main reason for marrying the wretched Clarice is so that Alyssa (Ashley Olsen) has a mom. Yikes. This part of the movie is cringeworthy and does not hold up.

Speaking of cringe-worthy things, what is this accent Ashley Olsen is doing?

I guess being wealthy means you kind of sound British? Roger (Steve Guttenberg) doesn't speak with an accent, so that makes it really confusing. But hey, Ashley Olsen is giving this role her all, so who am I to judge?

I can't get over the fact that these two girls are not twins, they just look alike.

Everyone is just like, "Wow, that's crazy, they're identical." Nobody is freaking out over the fact that clearly, some bonkers anomaly has occurred! Alyssa and Amanda don't just look like each other; they are exact doppelgängers. It's freaky. It would freak me out way more than it freaks anybody else out in this movie. But I guess if they had made them twins, this movie would fully become a rip-off of The Parent Trap.

Here's a thing I noticed as an adult that I definitely didn't when I was little: Steve Guttenberg is FINE.

And obviously, Diane was seriously feeling it too. There's just something about a '90s man. He was so cute. And he could ride a horse like nobody's business, so there's that. Keep reading to find out some other things I noticed while watching It Takes Two.

That entire horse scene was insane.

So, let's get this straight. Amanda and Alyssa's plan to get Diane and Roger to fall in love was for them to nearly kill Diane by upsetting her horse? And then they just hope that Roger happens to hear her screaming for her life? Sure, yeah, okay. That doesn't seem far-fetched at all. I mean, it obviously worked, but still, it's bonkers.

Next, let's talk about Clarice. She is evil incarnate, apparently.

The woman has no redeemable qualities. At one point she even says, "No wonder the woman’s dead, she had absolutely no taste," in regards to Roger's deceased wife. Never once does the movie try to explain why Roger is with her, to begin with. Sure, she's attractive and cultured, but she's literally a terrible person from the first second we're introduced to her.

But, despite how awful Clarice is, can we just acknowledge the fact that Roger is totally emotionally cheating on her?

Okay, yes, Clarice is the worst. But she's engaged to Roger. It's not like they're newly dating. Roger has, at some point, decided he wants to spend his life with this woman. And then BAM! He meets Diane and is all googly-eyed and is like, "To hell with being engaged! My wife-to-be is in New York for the week. I'm free!"

Roger needs to figure out his life, to be quite honest.

Watching this as an adult, it's apparent to me that Roger seems to be a bit of a serial dater. Like, maybe he should just be on his own for awhile? How can someone trust a man who proposed to a literal wicked witch? And, he nearly goes through with it! He makes it all the way to the altar before he's like, "Ummm, yeah, I don't think I want to marry you."

And even though Clarice is the worst person ever, it's still pretty embarrassing.

Her freak-out in the church is pretty great, though. Also, here's another thing I noticed: did she have to chop off her hair because Amanda stuck gum in it? Haven't rich people heard of the peanut-butter trick? The next thing I noticed might be the most bonkers of them all.

Roger and Diane have only known each other for days.

Days. And yet, when Roger is at the altar, he tells Clarice that he's in love with somebody else! IN LOVE! They've had like, five conversations. And when he starts thinking of all the good times he's had with Diane, they only show the two scenes they've shared together. It's ludicrous. But it's love...you know the kind.

They're really obsessed with this line. Everyone says it, or makes some similar metaphor to baseball, regarding love. I'm good if I never hear this metaphor ever again.

Another thing I noticed? The Olsen twins have great comedic timing.

This scene genuinely made me laugh so hard. Their facial expressions are hilarious, and for being so young in this movie, they really gave it everything. Am I too old to be an Olsen twin stan?

The camp was insanely cool.

I don't know about you, but the summer camps I went to growing up did not have pottery. This camp was crazy cool. Why are all movie camps the best?

Wait, so do the Butkis' ever get sent to jail for the apparent child labor ring they've got going on?

Diane definitely threatens the creepy Harry Butkis at the end of the film by saying she'll call child services, but does she? What about all those other poor kids the Butkis' have adopted and then forced to work in the salvage yard? Nobody seems worried about those kids which is pretty messed up. The next thing I noticed really made me laugh.

The butler, Vincenzo, pretty much believes Amanda immediately when she tells him she's not really Alyssa.

She's all like, "Well, does Alyssa have this scar? And this cut?" Also the line, "Roman candle, Fourth of July!" is hilarious. And then ol' Vinny is just like, "OMG. You aren't Alyssa! Because you have three scars that you surely couldn't have if you were her!" I mean, she really didn't have to convince him at all.

At the end of the movie, the amount of laws they break is wild.

Nobody seems to care that Clarice got denied at the altar.

Diane and Roger have only known each other for a few days, as previously established, but they seem to jump head first into a relationship? At the end of the movie, Amanda and Alyssa high-five and call each other "sisters." Anybody else feel like this is moving way too fast? How do we even know if Diane and Roger are truly compatible!

We don't. That's the beauty of this film.

Despite the absurdity of the plot (again, let me reiterate: they aren't twins, they are identical strangers!), I think this movie holds up. The Olsen twins were the absolute queens of the '90s, and they definitely proved so in this movie. Share this on Facebook with a friend who was obsessed with It Takes Two!