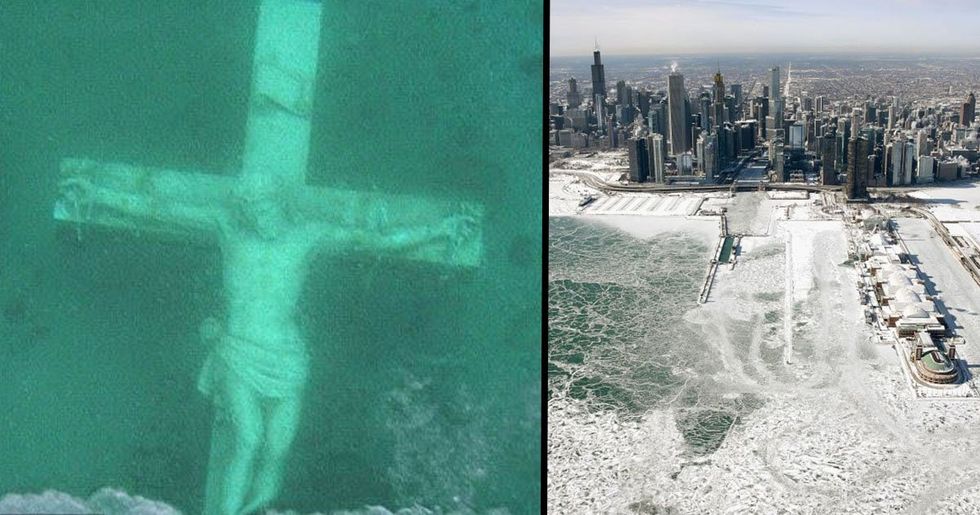 Lake Michigan has been successfully attracting visitors for decades now, thanks to its record-breaking facts. That includes its geographical measurements, people, and wildlife that surround the lake.

But this March it wasn't these that welcomed hundreds of people on a single day.

It was a life-sized underwater sculpture of Jesus Christ, dating all the way back to 1956. The story behind its journey from Italy to the U.S. is as tragic as the view of the sculpture is fascinating.

It was meant to be a memorial for a teenage boy who died over fifty years ago.

Eventually, the statue was purchased by a local divers' club and placed in the lake as a tribute to all those who lost their lives in the water. According to one diver, coming to see the statue is a spiritual experience, and he's seen that in the visitors' eyes.

Lake Michigan draws people in for many reasons.

According to Live Science, Lake Michigan has the third largest surface area of the 3 Great Lakes.

But it's the only one of them to fully belong to the U.S.

It's also the second largest of the three in its volume, holding 1,180 cubic miles of water.

Around twelve million people live on the shores of the lake.

It's got beaches just like the other two lakes, which is why together they're often called the "Third Coast" (next to the Pacific and Atlantic).

The lake water is usually about 60 degrees in July and August.

But sometimes it can reach as high as 70 degrees when it's particularly hot outside.

Interestingly, the water in Lake Michigan has an unusual circulatory pattern.

"It resembles the traffic flow in a suburban cul-de-sac — and moves very slowly," says Live Science.

Normally, the lake doesn't freeze over because of the winds and waves they cause.

But sometimes it does and the ice takes up around 90 percent of the lake.

The wildlife in and around the lake is just as fascinating.

"Marshes, tallgrass prairies, savannas, forests and sand dunes that can reach several hundred feet, all provide excellent habitats for all types of wildlife on Lake Michigan."

As for the fish, "trout, salmon, walleye, and smallmouth bass fisheries are prevalent on the lake. The lake is also home to crawfish, freshwater sponges and sea lamprey, a metallic violet species of eel."

"The lake is also home to a wide range of bird populations, including water birds such as ducks, geese, and swans, as well as crows, robins and bald eagles."

"Predatory birds such as hawks and vultures are also prevalent on the lake, due to the wealth of wildlife to feast upon."

"The pebble-shaped Petoskey stone, which is a fossilized coral, is unique to the northern Michigan shores of Lake Michigan and is the state stone."

But last weekend it wasn't the wildlife that drew crowds of people to the lake.

Daily Mail says they were there "for the chance of catching a glimpse of a rare sight."

That's a "life-sized statue of Jesus Christ on the cross submerged in Lake Michigan."

Last time, in 2015, the event had a record-breaking audience of 2,021 people who wanted to see the statue.

Since it depends entirely on the weather, this year visitors were very lucky.

The lake is currently frozen over, and so the workers had to cut a hole in the ice to be able to see the underwater Jesus.

There was enough time for 1,200 people to check it out.

According to Daily Mail, the statue is 5'5" and features Christ on the cross.

It seems to be the only one of this type of underwater sculptures in the world.

It can be found 1,200 feet from the Little Traverse Bay coast.

But the story of how it got there is just as beautiful and tragic.

Its story began in 1956, Inside Edition says.

That year, a 15-year-old boy died in a farm accident not far from Bad Axe.

His family ordered the sculpture from Italy as a tribute to the boy.

However, they refused it after finding out that the sculpture had got damaged during shipping.

So it was put up for sale.

Since the boy's family didn't want it, it was purchased by a member of a local diving club.

It was then lowered into the lake as a tribue to a diver who had died in the nearby Torch Lake.

Over time, Inside Edition says, "the statue came to be a shrine for all who perished in water."

In 1985, the sculpture was moved closer to the shore.

They had decided to do so because of the age of the statue and the sediment that started to gather.

The sculpture was opened to the public for the first time in 1986.

But 2015 was the most successful year so far when it comes to the crowd of visitors.

Since then, the event kept getting cancelled because of the weather.

Finally, it did take place this year. Hundreds of people came to Petoskey last Saturday between 11 a.m. and 6 p.m.

They were told to look for a tent covering the viewing hole.

Luckily, no poor weather conditions made the organizers cancel the event.

"Look for the tent — no tent, no event," warned the Petoskey Area Visitors Bureau.

"Seeing the world's only known freshwater-underwater crucifix is a powerful experience for many visitors."

That's what diver and co-organizer Dennis Jessick said, according to Detroit Free Press.

"You can see when they look down in there, [and] when you talk to them and they don’t answer you — it’s a special time for these people," he added.

"It’s an emotional thing for a lot of people."

The sculpture "rests on its back atop a limestone rock bed. Jessick said there are a handful of plaques at the site."

It pays tribute to the divers who have died in the lake.

Jessick also added that some of the boy's surviving relatives usually come to the event too.

"One memorable year, a wedding party drove a Lincoln Continental onto the ice and stopped to take a peek."

On Saturday, over 600 people came to see the crucifix, according to Up North Live.

There were even visitors from Texas and Alaska. The sculpture is expected to remain the way it is at the moment for the next 200 years before erosion does significant damage.