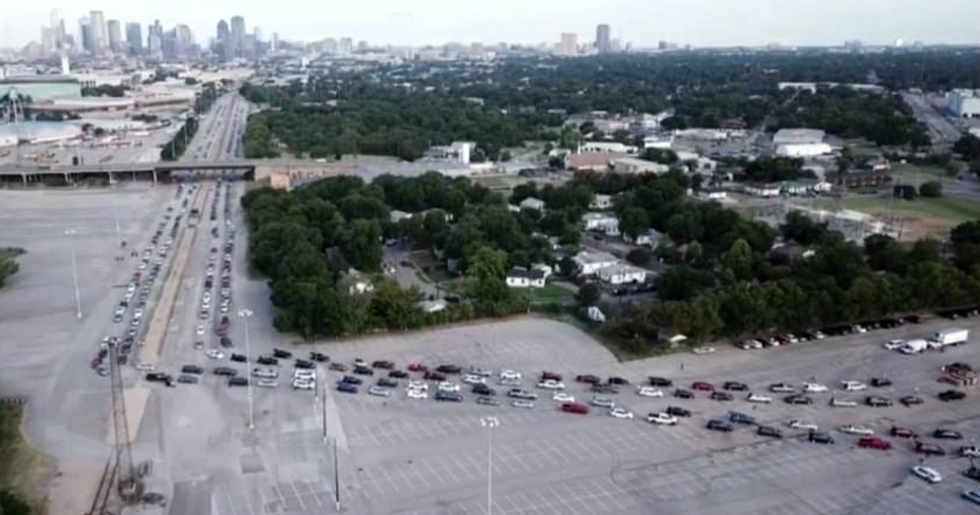 Heartbreaking images have emerged today that show the sheer scale of the use of food banks here in the States...

Our food banks are being stretched to their limits.

America’s food banks - charities across the country that provide donated food for the hungry - are being pressed into service more than they ever have before.

More and more families are finding themselves having to rely on these charities in order to survive.

And now, this reality has been captured perfectly on camera.

Photos have emerged from Dallas this week that shows thousands of cars queuing for a foodbank - An image once believed to not be possible here in one of the richest countries in the world.

But it stands as a poignant reminder of the impact the pandemic has had on our country.

Coronavirus has brought America to its knees.

While food banks have been in high demand for years now, never before has this many people relied on their services in order to get by.

Back at the start of the pandemic in March, there was a mass panic...

And supermarkets all across the country were rinsed clean of their products.

It was a truly dire time.

Never before had so many of us genuinely struggled to get our hands on basic groceries and supplies.

America's unemployment rates have dropped to a historic low - 17.75 million Americans didn't have a job in June 2020, according to the U.S. Bureau of Labor Statistics.

Thirty million Americans - around twelve percent - said in a census of 249 million respondents last month that at some point before July 21st, they didn't have enough money to eat.

So, as a result of the empty shelves and unemployment rates...

Our food banks found themselves with an influx of people in need, as well as a drop in donations.

So they have been left with little choice but to appeal to those who haven't been affected by the pandemic to donate as much food, supplies, and money as they can.

But, out of all the food banks in the country...

It is the ones in Dallas, Texas, who have been impacted the hardest.

Dallas, in particular, has been hit hard by the redundancy surge...

@RBReich And Dallas ran out of food at a food bank. How is this possible as what is perceived as the “richest country in the world”?
— 🇨🇦 Heather (@🇨🇦 Heather)1597352206.0

And now, footage has emerged from one of their food banks that puts this issue into a whole new, yet stark perspective.

Photos that showed thousands of cars queueing for over a mile for just one food bank was posted online...

And they were quick to circulate and go viral.

How did this happen? Fair Park in Dallas County held its fourth food drive since the pandemic was declared in March, but the event on Tuesday was the first distribution that offered an option for several hundred walk-up clients without transportation.

The food bank offered an array of supplies...

It was reported that many people had traveled from the other side of the state to reach the North Texas food bank...

And some even set off as early as 5 am to be the first in the queue.

But, by 9:30 am, it had completely run out of supplies, so many were turned away after hours of waiting.

It was a desperate situation.

And, ever since, people have been calling for President Trump - who tweeted about stock market success on the very same day as the photos went viral - to reevaluate his economic plan.

Our food banks are in desperate need of help...

But, luckily, one YouTuber managed to raise a staggering $1 million dollars for his local bank. Keep scrolling for the full story...