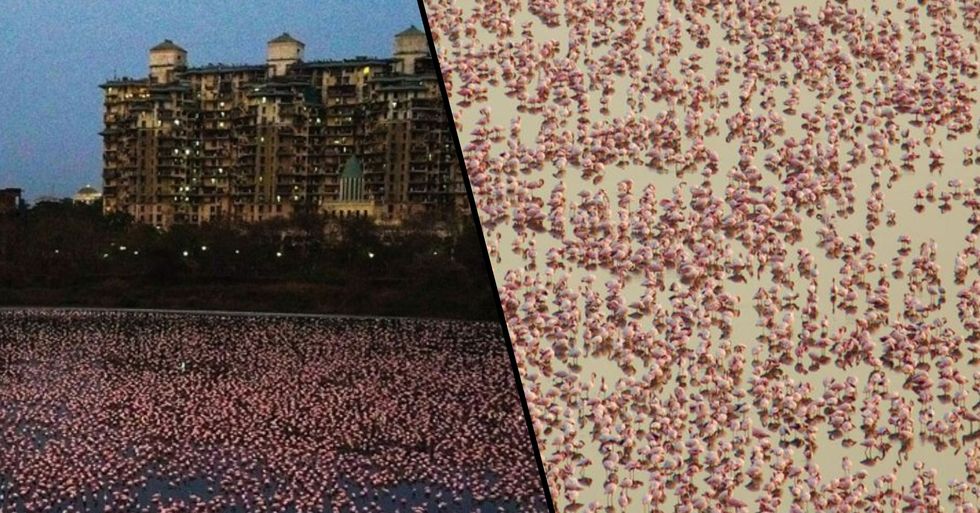 Now that millions of us all over the world are quarantined indoors, wildlife has finally been given the chance to thrive and they are doing it spectacularly.

Keep scrolling to check out the remarkable flocks of flamingos that have appeared in Mumbai...

For the last few months, a vast majority of the world has been on lockdown as a result of the ongoing medical pandemic.

Humans have been required to stay indoors indefinitely...

And this has hugely benefited our turtles, in particular.

Turtles have long suffered at the hands of humans.

And things have been just as bad on the shore.

Overcrowded beaches have meant that the turtles nesting routine has been disrupted massively.

For millions of years, turtles have been laying their eggs on various "nesting beaches"...

Where they leave them to hatch alone. And, once hatched, the hatchlings independently make their way back into the ocean.

But, as a result of these nesting beaches becoming overridden with tourists...

Turtles have been unable to nest as easily as they were once before, and hatchlings have been struggling to make it safely back into the ocean without being captured or killed by humans first.

Nesting beaches all over the world remain void of people and pollution, meaning our sea turtles are finally able to nest peacefully - And they're completely thriving as a result.

Thousands of turtles are currently migrating to nesting beaches in Florida and other areas in the Southeastern United States.

Sarah Hirsch, senior manager of research and data at Loggerhead Marinelife Center, told WPEC that "it's going to be a very good year for our leatherbacks."

The nesting process is going to be more successful than ever before.

"We're excited to see our turtles thrive in this environment," Hirsch explained."Our world has changed, but these turtles have been doing this for millions of years and it's just reassuring and gives us hope that the world is still going on."

It is all a direct result of our absence.

David Godfrey, executive director of the Sea Turtle Conservancy, told CBS News in an email that, since there are far fewer people boating and operating cruise and container ships now, "the chances that turtles are going to be inadvertently struck and killed will be lower."

This news is remarkable...

And turtles aren't the only creatures thriving in our absence.

Recent scenes in Mumbai, India, have taken our breath away.

Wild flamingos have been flocking in Mumbai's waters and, in particular, areas that would normally be overridden by tourists.

Flamingos have been local to Mumbai for decades now.

As reported by Science Times, although flamingos have been spotted in Mumbai since the 1980s migrating there between October and March for feeding and breeding, the population is reported to have increased, with huge numbers of the birds photographed chilling on the mudflats of Thane Creek.

Locals have reported huge increases in the animals, sharing photos online of the pink and white creatures lighting up the lakes...

And it is truly astonishing to see the number of these beautiful birds appear from nowhere.

Lakes have been transformed...

Flamingos Have Taken Over Mumbai As Humans Sit in Quarantine — and the Photos Are Amazing (Video)… https://t.co/RlcnPOlxfP
— Travel + Leisure (@Travel + Leisure)1588224627.0

And they now radiate a beautiful pink hue thanks to the hundreds of thousands of flamingos.

Locals have enjoyed these beautiful scenes.

A resident of the city, Sunil Agarwal, told the Hindustan Times, "Residents are cooped up at home spending their mornings and evenings at their balconies taking photographs and videos of these relaxed birds."

Many hope that seeing these beautiful animals will allow people to focus on Mother Nature and take better care of our planet.

"The lockdown will at least prompt people to focus on what is around them, which they had been taking for granted, and hopefully this site will be declared a flamingo sanctuary soon."

So make sure to keep scrolling to read about the impact on turtles here in the United States...