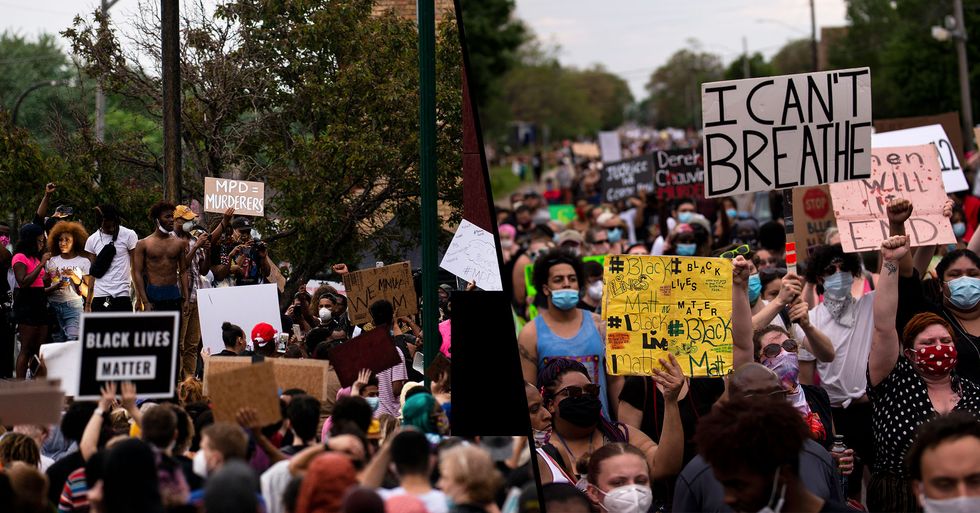 The tragic news has come in that yet another black man has died after a police officer kneeled on his neck for several minutes, causing him to suffocate to death. Now thousands have taken to the streets of Minneapolis to protest his murder.

Keep scrolling to see all the heartbreaking pictures from the rally.

Police brutality is one of society's most lethal issues.

"That 1-in-1,000 number struck us as quite high," said study leader Frank Edwards, a sociologist at Rutgers University. "That’s better odds of being killed by police than you have of winning a lot of scratch-off lottery games."

This makes black people twice as likely to die at the hands of a police officer than white people...

And nothing much has been done in the last few years, despite these harrowing statistics.

It has been predicted that around 1 in 65 deaths will be a black person at the hands of the police.

"This epidemic is disproportionately affecting black people," said Brittany Packnett, an activist and member of the White House task force on policing. "We are wasting so many promising young lives by continuing to allow this to happen."

The police are more likely to use racial profiling from criminal records...

And this is why black people are more likely to be randomly handcuffed, searched, and detained than white people.

Yet nothing seems to be getting done about this imminent problem in our country.

Growing up in America as a black person isnot easy...

And sadly, things just seem to be getting worse, even during lockdown.

The tragic death of Ahmaud Arbery has made headlines in the last few weeks.

Arbery was shot dead by police in Brunswick back in February while he was jogging through the Satilla Shores neighborhood.

Cellphone footage showing the moment he was shot has prompted national outrage since it surfaced online...

A large crowd of protesters marched through the area where Arbery was killed and people have been demanding justice.

The pressure has been mounting on the police force to take action against the officers responsible for Arbery's death...

And even though the case is currently being investigated, attitudes clearly aren't changing.

It happened in Minneapolis on Monday, and passersby filmed 2 police officers "arresting" a black man for an assumed drug-related incident.

Police found the man, who is believed to be in his forties, matching a suspect's description in his car.

When he supposedly "resisted arrest", one of the officers got him on the ground and pinned him there by pressing their knee into his neck.

This position is clearly very painful for the man who was identified as George Floyd.

"Please, please, I can't breathe," he can be heard begging as the officers remain standing.

In the disturbing video, the man's nose begins to bleed...

"My stomach hurts. My neck hurts. Everything hurts," he moans as passers-by begin to gather and repeatedly tell the officer to stop leaning on him.

Multiple witnesses are arguing with the officers when the man starts to lose consciousness...

After around 4 minutes of the officer kneeling on him, the man is completely unresponsive.

An ambulance arrives and the paramedics check his pulse and move his body onto a stretcher - he was later pronounced dead in the hospital.

Meanwhile, the 2 police officers have shown absolutely no emotion, regret, or urgency.

Which has caused global outrage.

The officers involved have been put on paid administrative leave, per department protocol.

Two other members of the Minneapolis Police Department who were involved in Monday's incident have also been fired, and the FBI has launched an investigation into the George Floyd's death.

Minneapolis Mayor, Jacob Frey addressed the incident in a press conference on Tuesday morning, referring to events in the video as "wrong at every level."

"Being black in America should not be a death sentence. For 5 minutes we watched as a white officer pressed his knee to the neck of a black man. For 5 minutes," he said. "When you hear someone calling for help, you are supposed to help. This officer failed in the most basic human sense. What happened on Chicago and 38th, this last night, is simply awful."

It has been yet another restless night for those in the state.

With the permission of the mayor, who allowed them to go out, thousands upon thousands of protesters took to the streets to express their hurt and their anger at the injustice that had taken place less than forty-eight hours ago.

As they took to the streets, police in riot gear pelted them with rubber bullets and tear gas.

In their hands, they had signs that read "I can't breathe," and "justice for George Floyd." When the police started attacking them, they ran for cover or doused their faces in milk to prevent the horrible after-effects of coming into contact with tear gas.

The protest took an ugly turn when both sides started hurling things at each other.

As the protest continued into the night, the peaceful protest started getting more and more intense with gas canisters and more bullets being used frivolously.

Footage taken during the protest revealed some pretty disturbing sights.

At one point, some protesters sit on the ground, while officers throw smoke bombs, tear gas, and flash grenades into the crowds, injuring many.

The photographs have been just as harrowing.

It seems as though the police in the area still don't understand that people are hurt. They're hurting, just like George Floyd's family, who demand that the officers involved get put on trial. It's 2020, yet lukewarm acceptance of black folks means more deaths at the hands of the state. Black lives do matter.