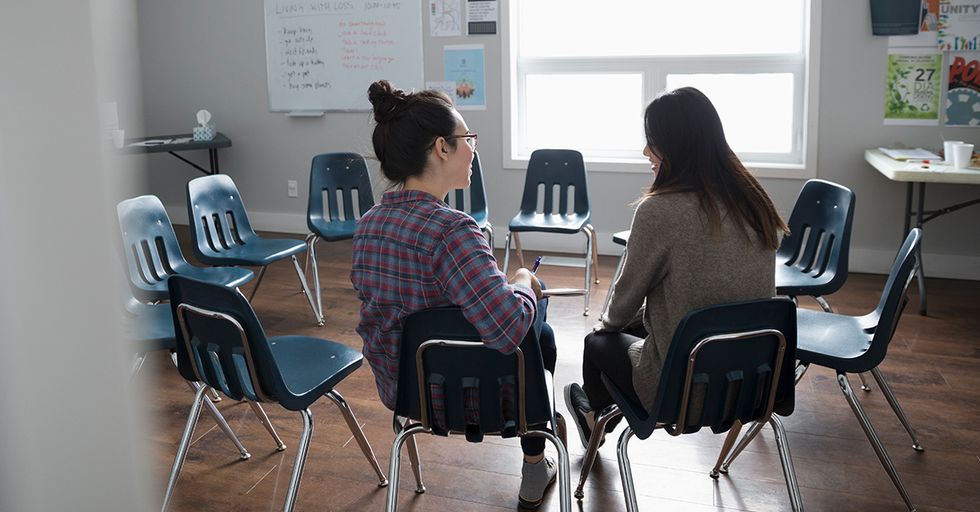 Let's discuss negative self-talk. Plenty of people in this world have to fight their brain when it starts pushing in some uninvited thoughts. Negative self-talk is like the opposite of having a cheerleader; it's a voice, near-constantly talking, telling you all the things you can't do. With time, we make coping strategies to deal with the voice. But it sure isn't easy.

Negative self-talk is particularly common in people with anxiety, depression, and other mood disorders. In some cases, the negativity is like a constant warning bell, making it harder to do the things you need to do. Now, sometimes, the voice skips right over negative thought and goes right to being a bully. That kind of voice isn't the one this story refers to – dealing with an inner bully is a whole other ordeal. But let's talk about your basic negative self-talk: the anxious voice that makes everything seem a hundred times worse than it actually is.

Because one Twitter user came back from therapy with a pretty amazing new tool for dealing with her inner negative voice. Here's what she had to say!

Negative self-talk can be a huge problem.

It really is true that, in many cases, we're our own biggest saboteur. Even in times when the world is telling you yes, there's a little voice always telling you no.

In the context of anxiety, it ramps up the fear.

Everything seems like it could so easily fail, or fall apart. The voice says, "don't do that, because if it doesn't work, you'll be worse off. Don't try, and you won't fail."

Most people would agree that it gets old real fast.

But even once we've decided to fight back against that negative self-talk, there's still a question of how.

When you repeatedly do something, you can work yourself into a rut. And this is no different with negative self-talk. The longer it goes on, the more normalized it becomes, the more of a mental rut you'll be in. Digging yourself out of that rut takes serious work.

Well, there are mental health experts with many different answers to that question. But for the moment, here's an amazing realization that one woman had with her therapist recently.

Her therapist had an unorthodox suggestion.

Be nice to the voice that's making your life harder? Why?

Her inner voice sounds pretty difficult, after all.

It's hard to find enjoyment in things when there's a voice yelling at you about how fleeting and precarious it all is.

But then her therapist asked a question.

And it makes sense, right? Your brain is trying to protect you, but in a very unhelpful way.

Honestly, big ol' therapy-epiphanies are kind of the best. Isn't it nice when everything just clicks into place in your brain?

So here's what she discovered:

See what Tracy means about her inner voice being negative, but not a bully? There are actually different tones a negative inner narrative can take.

All the therapist had her do was put this voice into a different context.

Because at the end of the day, it's a person that you have to deal with. That person just happens to be yourself.

She figured out the voice's true nature, and can now handle it accordingly.

Her therapist taught Tracy how to speak with her voice.

And in Tracy's case, it didn't have to be a battle, or an angry exchange of words. Just a gentle "thank you, but no."

Every person has that fight-or-flight instinct.

But when you suffer from anxiety, the magnitude of your fear is so much bigger.

You don't have to forget, but you can try to forgive.

We all have regrets, and things we're mad at ourselves for doing (or not doing). But when you can re-envision your fear like this, it may help you move past it.

Look at it this way:

It's an interesting interpretation of anxiety, right?

Notice the other part of Tracy's words.

Not just the reply she gave her anxiety, but the part where she says "I can handle this now." She's calming the anxiety and recognizing her own ability and power. And that's how you change the narrative.

Here's why the alternative coping method isn't as helpful as you think:

In both instances, you're powering through the anxiety. But this more angry strategy also makes you do so much work when you might not even have to push through. You might just have to give it a gentle but firm "no."

In other words, you can get better without being at war with yourself.

Repressing your feelings isn't constructive. They're real, they happen. Just know when to listen, and when to move right on.

That being said, everybody is different.

Anxiety and other mood disorders don't affect each person in the same way. But if this version of anxiety does align with yours, maybe Tracy's breakthrough will help!

Just ask yourself what's really happening when you hear a negative inner voice.

Now that Tracy knows herself and her mind a little better, hopefully, she'll use that knowledge to great effect!

See how this works?

Just find a nice way to tell your anxiety-brain to take a chill pill.

It's definitely an unlikely thing to feel sympathy towards.

But in Tracy's case, it might be just what she needs!

So Tracy is going to make some changes.

As the saying goes, kill it with kindness.

The internet fell in love with Tracy's thread.

Not everyone who needs a therapist can afford one, but threads like this make self-improvement still possible.

Some shared in Tracy's emotional response to this realization.

Everyone deserves to find understanding, and we need to understand ourselves to properly care for ourselves.

As one person put it, this is a good first step.

There's no magical cure for anxiety, but tons of little things you can do for yourself to help.

And some people haven't reached Tracy's point of progress yet.

But that's okay; we're all doing our best. And even if you aren't where Tracy is, you can look at this as a goal to reach – the point when you're able to be kind to yourself in this way.

The thread reminded many people that they're not alone.

@brokeymcpoverty I’m working with my therapist to have compassion for those negative voices, too. It is HARD some d… https://t.co/JfA7fKqFfY
— Elisia Saam-Quinty (@Elisia Saam-Quinty)1547845132.0

So many people deal with these issues, and it's comforting when you feel alone to think about all the tons of people out there feeling what you feel, and surviving like you are.

So if Tracy's words resonate with you, give them a try!

We have nothing to lose and so much to gain by just being a little kinder to ourselves. Find this helpful for handling your own negative thoughts? Know anyone else who might also benefit? Share this mind-blowing story with them!