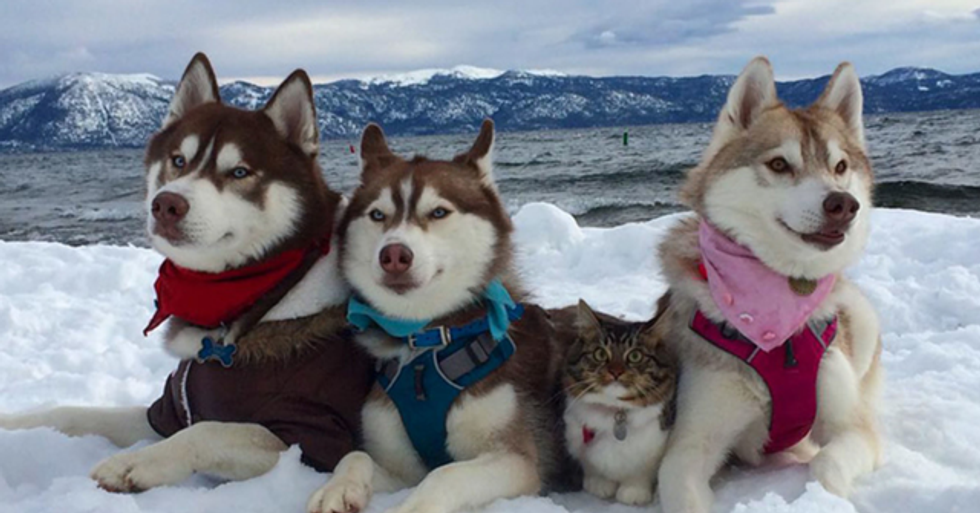 After a kitten was found abandoned and alone, her rescuer didn't think she stood much of a chance of survival.

However, little did she know that her 3 pet huskies were about to step in and save her life...

For decades now, cats and dogs have been sworn enemies.

Well, they have been in the movies, that is.

It's a tale as old as time.

But, in reality, their relationships are a little less complex.

Over the years, there have been countless cases of cats and dogs living in harmony with one another.

And there really isn't anything else quite as wholesome.

The internet is awash with heartwarming tales of interspecies friendships between cats and dogs, but the latest may just be the most adorable yet.

This gang of friends is an usual, yet perfectly happy family of 3 huskies, Lilo, Infinity, and Miko, and a cat, Rosie.

Have you ever seen such a handsome family?

Nope, neither have I.

Thoa Bui, who owns the animals, found Rosie at only 3 weeks old, telling ABC News Today that the kitten was "malnourished, lethargic and dying."

Lilo is the husky leader of the pack...

So Bui took a chance and put the kitten in the dog's care.

And, thankfully, their decision paid off.

"We took a chance and put her with Lilo, and Lilo really saved her life," Bui said.

Lilo rose spectacularly to her role as a foster mom...

"Lilo never left Rosie's side for hours. She cuddled her and comforted her until she was better and ready to finally drink from a bottle."

And Bui noted how the kitten started "mimicking everything Lilo did."

Slowly, the other members of the pack were introduced to Rosie...

Including her cousins and her siblings, Infinity and Miko.

And now, Rosie is an official member of the family.

"Rosie is now a part of the pack," Bui said. "Since Lilo is their leader, Infinity and Miko just accepted her, and now they're all good friends."

The animals all eat and drink from the same bowls...

As well as play together, go on group walks, and even take collective naps.

The pack loves a group selfie, too.

Bui added that she and her sisters love taking photos and videos of the photogenic friends, who prove love knows no bounds.

It truly is the most wholesome dynamic...

And Bui has even noticed that thanks to the friendship, Rosie has picked up Husky-like characteristics.

Rosie is a dog in the form of a cat, according to her owner.

She loves going on hikes, and she's "fearless," according to Bui, who said the cat isn't afraid of water like most felines.

On Rosie's unique character, she explained:

"We go on a lot of road trips, and we recently took Rosie kayaking and paddle-boating with us. She's not afraid at all, and as long as Lilo is there, she knows everything is going to be okay."

And, when Rosie had kittens of her own...

Of course, Miko was on standby to offer a helping hand... Or a paw.

They really are the most idyllic family...

Who else suddenly wants to adopt 3 huskies and a husky-like cat? For more unusual, yet adorable animal friendships, keep scrolling...