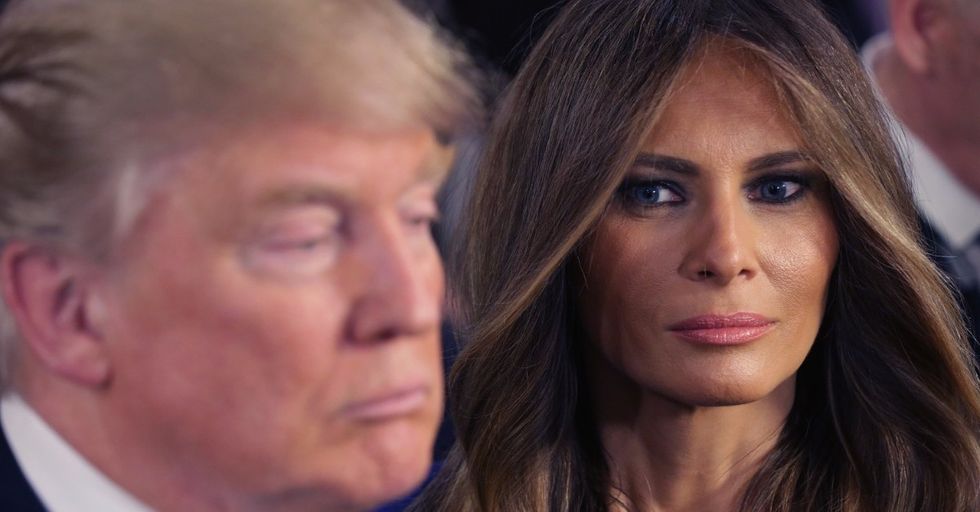 Melania Trump is no a stranger to the spotlight. One could even argue that a model who marries an billionaire 24 years her senior might crave attention, but whether she is an attention seeker or not, it is clear that Mrs. Trump doesn't crave any attention she perceives as negative, and she is not afraid to file lawsuits when she feels slighted.

Enter an English language school in Croatia and a recent billboard campaign featuring the illustrious First Lady. The signs have all been removed, and apologies issued, but people are still talking about it and Melania is not happy.

See what the sign says, and decide for yourself...

Melania is serious about protecting the Melania brand. Her integrity is paramount.

(Yes, that is our first lady's nipple.) Last September, the first lady sued British tabloid The Daily Mail for $150 million in damages for republishing allegations that the former model was contracted for more than just modeling in the 1990s, implying that she worked as an escort. The lawsuit was settled with a payment from The Daily Mail to Trump in the amount of $2.9 million.

How could anyone even think that she'd sell herself for money?

The truth is the gold plated limelight was a price she was willing to pay for love. I'm not privy to Melania's mind's inner workings, but it's possible that her marriage to Mr. Trump isn't turning out like she expected.

Maybe the honeymoon is over.

Oh, who can forget the hand smack seen around the world? If the Trumps can't keep the love alive, what hope is there for the rest of us? Hopefully, this was just a misunderstanding.

But it's so hard to tell what she's feeling.

Maybe it's her experience as a model that helps this busy first lady keep up a polished veneer of perfect happiness. Is Melania truly as happy as she seems?

Once in awhile, it feels like we get a glimpse of something else.

Seriously, one doesn't have to be any kind of expert to see that lately Mrs. Trump doesn't appear happy. It seems like the job of First Lady has been foisted upon her. It's possible that when she chose to marry the old, rich, Manhattan real estate developer, she didn't expect that he'd be President one day. So we're all unhappy. All of us except the American Institute, the English language school in Croatia which has attracted a ton of attention with its a recent ad campaign. The school is loving the attention, but the first lady is now definitely, unambiguously unhappy. Click ahead to see what they did to make her so mad...

The billboard appears to poke fun of Melania's English.

Although the American Institute claims that they did not intend for the billboard to be disrespectful of the First Lady, it does seem to be a jab at her heavily accented English, rather than a nod to how far the native Slovenian has come thanks to her hard work and merit.

Melania has a Slovenian law firm on hand to deal with this type of thing.

Naturally, Slovenia is proud of Melania's status as First Lady. However, when brands and products in her native country try to capitalize on her position by using her image or name, her lawyers are quick to shut them down. In this instance, it is unclear whether a lawsuit will go forward. When contacted by Trump's legal team, the American Institute took down the billboards and social media postings and issued an apology. A spokesperson from the school, Ivis Buric, said, "We are very sorry that the billboards were misunderstood as something intended to mock the U.S. first lady. It was meant to be something positive, to show her as a role model."

The actual signs may be gone, but thanks to the internet, their memory will live on forever...

People were quick to react to the billboards.

Despite Mrs. Trump's careful stewardship of her brand and image, it doesn't seem like she's well loved.

Ouch. Most people's reactions were along similar lines, finding the billboards funny and joining in on the joke.

She's not the only Trump taking heat.

Turns out, just about any occasion is a good occasion to throw shade at the President. But it wasn't over yet...

Not everyone believes that Melania got where she is due to her excellence in English.

At this point, I would like to take a moment to ask Melania detractors to please give a speech in Slovenian. No? How about read aloud to children from a Slovenian book?

This probably won't be the last Melania related lawsuit we see.

The drama unfolding in the White House on all fronts is fascinating. Considering how much attention the Trumps get from all sides and all types of media, clearly none of us can look away. There is no telling what will happen next.