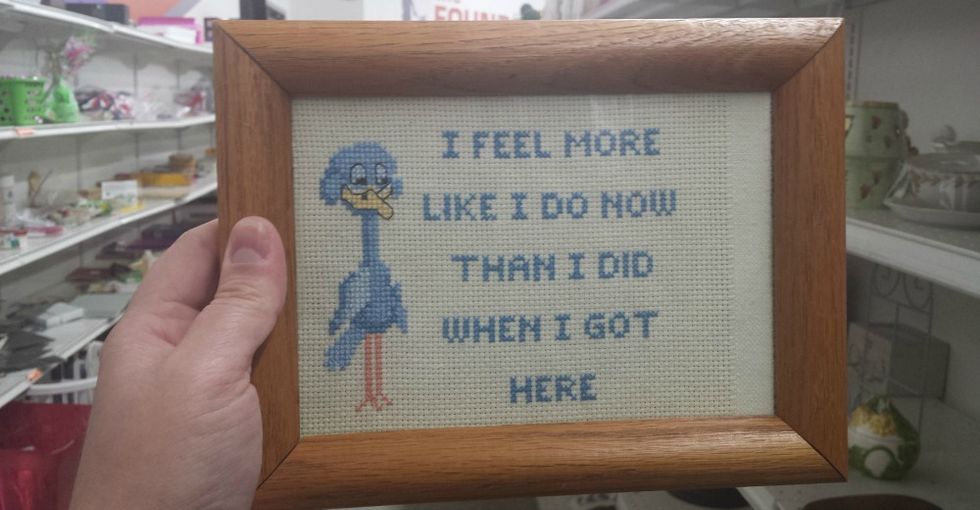 There's something about going thrift store shopping that makes you feel like you're on a treasure hunt. Sure, most of the time you find stuff that should have been taken to the dump 20 years ago, but every now and then you luck out and find something so completely perfect (like this gorgeous wedding dress) or ridiculously bizarre that you have no other option but to take it home with you.

Once, when I was at a Goodwill in a small town in Iowa, I spotted a woman who had to be in her mid-80's select a pair of hot pink platform spike heels with sparkly straps and place them in her cart along with a few doilies and creepy ceramic clowns. She immediately became my hero.

To say that the following thrift store finds would fall into the "bizarre" category would be an understatement. Keep scrolling to discover what might be waiting for you at your local secondhand shop.

That is one ticked-off uterus. I would like at least 7 of these 'Screw U-terus' pins, please.

Nothing gets me more awake and excited for the day like a hot, steamy cup of "Joe."

The look on her face really says it all. "Why was I created?" "Who would do such a thing?!"

Judging from the background, it looks like there were boxes and boxes of these shoes at the thrift store. Who would have thought that sneakers with eggs on them wouldn't be popular?!

The only thing I love better than a good cup of tea is a good pun. "I pity the fool" who sent this gem to Goodwill.

I was looking at my jewelry collection the other day and thinking to myself, "Hmm...something's missing, but I can't put my finger on it." Then it hit me. "Oh, teeth. It needs more teeth."

If you've been looking for the perfect plate to use when your mother-in-law comes over for dinner, here it is.

You know what, Tim? I would not like to be tickled. It's time you learned about a little something called "consent."

This toilet seat is perfect for the big spender on a budget. It looks like you're so rich that you're literally sitting on cash when you go to the bathroom, but you don't have to break the bank to achieve that image.

As a die-hard fan of the 90's classic Star Trek: The Next Generation, it physically pains me that this striking portrait is not currently hanging in my home.

This confusing piece of art

It took me far too long to realize that this art piece is actually a pun. Can you figure it out? It's both romantic and disturbing!

There are basically endless uses for this sack of doll heads. I, personally, would place them on spikes in my yard to keep the neighbor kids off my lawn.

I somehow don't understand the meaning of this sign and, at the same time, relate to it harder than I've ever related to anything.

There's no way this thing isn't either haunted or cursed. I'm guessing it's both.

Warning: If you suffer from seizers, it is recommended that you do not purchase this dress. But it's cute for a night out, right?

How adorable is this thing?! And by "adorable" I mean "weird, creepy, and nightmare-inducing."

I like to think that Jason Voorhees swapped out his trademark hockey mask for this one on days when he wanted to pamper himself.

Nothing is more appetizing than adding a pair of feet to your table during dinner.

I'm no art critic, but is this actually a painting of a baby head with no eyes sandwiched in between a pair of dentures? Really makes you think, doesn't it?

If only I had enough room in my home for this guy. He would look right at home next to my stuffed elephants and tigers.

Either this graphic was lost in translation, or it means something very specific that only a very small number of people would understand. Basically, it's a great tee if you're looking for an outfit that's both cute and confusing.

This charming gift would be a great option for a friend that you've had for ages. Everyone loves sentimental snake-themed knickknacks, right?

I always say, even if you're living in a post-apocalyptic wasteland, it's important to look your best.

I don't know about you, but I like to feel like I'm about to get kicked in the face whenever I make a phone call.

This cheesy piece of art

So, did this piece of etched glass featuring a portrait of the Mayor McCheese come out of the classiest McDonald's ever? ...and is it weird that I would actually consider hanging this in my home?

Everyone could use a helpful maid around the house. Prop this sweet old girl up in the kitchen to serve your guests appetizers while at the same time convincing them to never return to your house. No more entertaining for you!

This looks like the Frankenstein creation of a 14-year-old girl. The rollerskates are a nice finishing touch.

I had a baby three months ago, and before I gave birth I had a dream that he came out looking a little something like this. So, basically, this thing is literally out of a nightmare.

Need a fun gift for the golf fanatic in your life? These are a great option! Not only are they hilarious, but they're also completely useless and impractical!

And lastly, this bucket o' chompers

Sure, it's disturbing, but there's no way you'll find a better value than $8 bucks for a full set of stranger's teeth molds. The only problem would be choosing which ones to take home!