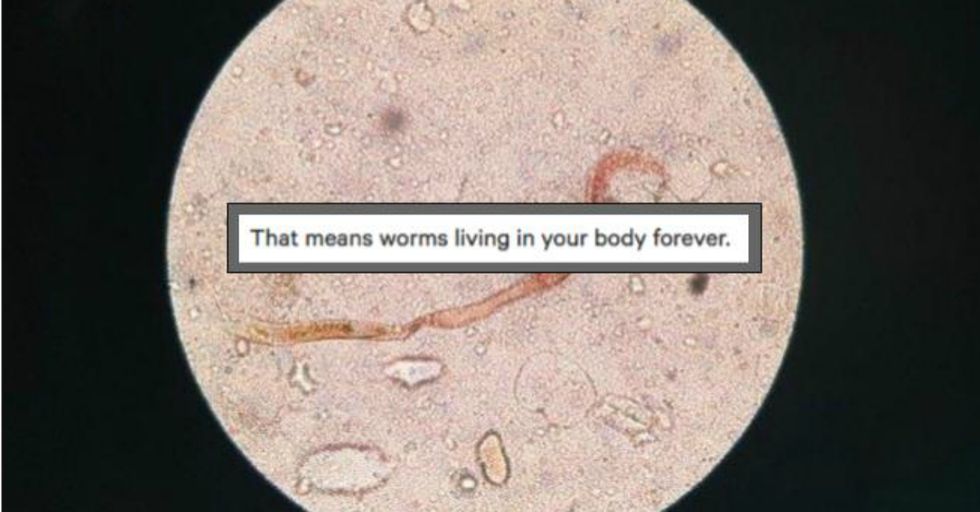 Through a Hilarious Series of Question, Reddit Helped This Guy Figure Out He May Have Contracted a Parasite

It’s not hard to use the internet to convince yourself you have a life-threatening illness. Most of us have had a simple sore throat and, after a deep dive into WebMD, come to the conclusion that we definitely without a doubt either have stage 4 lung cancer, dengue fever, or dengue fever on top of stage 4 lung cancer (and also an unrelated case of ringworm).

The internet can be a dangerous place when it comes to self-diagnosis. But this week on Reddit, a user who didn’t think anything was wrong with him and wasn’t even scouring the internet for medical answers put some pieces together and made an awful discovery: he may have contracted a horrific parasite.

One user posted a video of bear hunting, which prompted another user to ask if you could eat bear meat. The answer was yes — some people do eat bear meat.

However, another poster warned that while you could eat bear meat, you have to be careful.

Bear meat can contain a parasite called Trichinella, a roundworm that lives in muscle tissue. Trichinella can cause trichinosis in humans, a parasitic disease that causes vomiting, diarrhea, and abdominal pain upon ingestion and then — once it migrates to the muscles of its new host — muscle weakness, discoloration of the skin, and swelling. So basically you really don’t want it in your body.

But then a Reddit user had a shocking realization.

User Talev2 wrote, “Serious question here, I ate bear meat in the summer and I had the worst stomach pains for 3 straight days where I just stayed curled in a ball in bed. Should I be worried about this trichonosis thing? I remember the meat having a very weird texture and having some small hard bits inside, don't know if that's normal. I never had such painful stomach pain before but I don't often have any stomach problems so I don't even know how to judge how bad it was."

He commented later that he read up on the symptoms and they all seemed to match what had happened to him.

He wrote, “I read the wiki and I remember all my muscles feeling really weak I quit soccer for the rest of the summer after that and I also had a insanely red face with pale skin around my eyes for about a week after that too, I remember wanting to stay inside that week since I looked hella weird. I thought that was just typical symptoms of eating bad meat!" I’m sorry but WHAT kind of meat are you eating typically that would make you feel this way, sir?

Other commenters quickly encouraged him to visit a doctor.

Once a person ingests Trichinella, its larvae moves to their muscles, where they grow into adults and can live for the rest of the person’s life. That means worms living in your body forever.

The poster was worried about visiting a doctor because he didn’t want to spend a lot of money on tests.

America: where people who may or may not have a parasitic worm are afraid to go to the doctor because it’s too expensive.

He also worried the doctor would think he was crazy.

He did eventually go to the doctor, and he brought with him a printout of all the comments his discovery had received on Reddit, just to show the doc he wasn’t insane. You have to admit, "The internet thinks I might have a rare bear parasite" does sound a little crazy.

As of now, he's still waiting for tests to reveal if he has the parasite.

He promised he would keep Reddit updated on his results. The parasite is rare — less than 20 people in the U.S. get it per year. But his story checks out, and it’s a definite possibility. We are waiting on the edge of our seats for the results.

But seriously, this is making us feel queasy.

Another Reddit user, Gulliverlived,  put it nicely: “Well, I certainly hope he sees this if nothing else, because I've never eaten bear, good or bad, yet I now feel an urgent need to see a dr."

If the spirit does move you to eat a bear: be safe! Trichinosis can be avoided if meat is fully cooked.