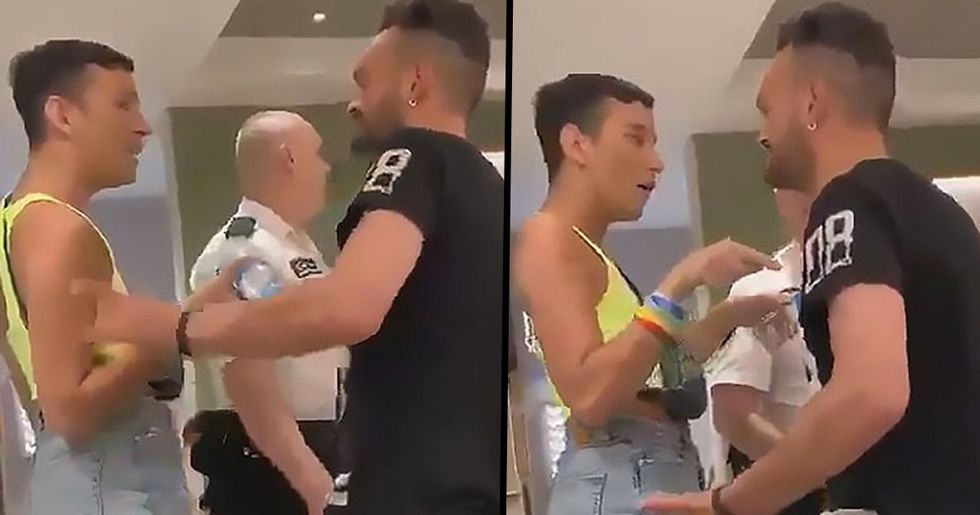 With the sheer amount of coverage that Pride received over the past month, you may be forgiven for thinking that homophobia and hate crimes are no longer an issue. After all, if every store out there is selling rainbow adorned shirts and whatnot, love has surely won and we no longer have to fight for the rights of marginalized communities, right? Wrong. One disturbing video shared on social media this weekend proves that we've actually got a very long way to go.

After a Pride event in Barcelona, Spain, a man was targeted in a McDonald's. His "crime?" Wearing a pair of rather tiny shorts.

Last month, it seemed like the world was taken over by Pride.

June was Pride month and the time for many parades, celebrations, and product tie-ins, all around the world.

Pride is often thought of as something of a party.

But it's important to remember that the event has huge social importance, and actually started because of a protest against police treatment of LGBTQ people in New York.

Although some worry that Pride has lost that initial meaning.

What was once seen as an important political movement now has some strong associations with more of a rowdy, party atmosphere.

Although perhaps there's a reason for this.

Many people now believe that the work of Pride is basically over and that LGBTQ members of a community have achieved those rights they have long been fighting for.

Which does make some sense...

Now that fewer people have a hateful or negative attitude to different types of people being in love, it seems like Pride can start to be more of celebration than a protest.

But, sadly, it's important to remember that this may not be the case.

The #Pride parade is an embarrassing freak show that reflects the decadence of a rotting civilisation. It’s suppose… https://t.co/KJeXPpTe1V
— Pat Condell (@Pat Condell)1562567221.0

In fact, while it's rarer to find those who openly express hateful and homophobic views, these people are still out there - and understanding and remembering that is key.

And there's a real danger that comes with those sorts of views.

Holding hateful beliefs about a certain "type" of person will usually fester over time, which can lead to more violent and dangerous actions.

And, for the most part, these events seemed to go off without hitch. After all, celebrating love and expressing one's true self should hardly be a controversial movement, right?

One such parade took place in Barcelona.

One June 29th, people took to the streets of the Spanish city to celebrate their sexuality and gender identities.

The turn out was incredible.

Which is obviously hugely encouraging. But a recent viral video has shown the internet the darker side of expressing oneself at Pride - and it's pretty shocking.

Images of the incident quickly took the internet by storm.

It was filmed by a friend of the victim of the threats, who shared it with the caption: “It is ironic that this happens on the same day as the proclamation of Pride."

It's believed that the aggressor took issue with the man's outfit.

He approached the pride-goer in order to complain about the petite style of his shorts, calling the revealing outfit "disrespectful."

The man's shorts were a little on the small side.

But, really, he wasn't harming anyone with his outfit and was quite simply minding his own business while on the hunt for a bite to eat.

But that didn't stop the man from getting angry.

In fact, he followed his "disrespectful" comment by asking "why should I have to put up with this?" He then went into a direct threat, claiming that he could "beat the gay" out of the Pride-goer.

The Pride-goer managed to retain his cool, though.

He replied to the threats with "my manner is fine, and this is a public place." He then said, "You don’t have to say anything to me. I’m just grabbing my burger and eating it."

The aggressor seemed desperate to start a fight.

He repeatedly asked the Pride-goer to go outside, presumably so they could fight. In response, the man stayed calm and repeated, "I haven’t done anything to you."

"When you go out I am going to hit you so hard your queerness disappears," he claimed. Later, after being told that it's the Pride march, the aggressive man answered: "I don’t care what day it is, it is also a good day to punch you. Do you want to see?"

While it's all in Spanish, many on the internet have translated the horrific scene, to help everyone learn that these events aren't as rare as we may wish to believe.

Many have spoken out to condemn the action.

McDonald's have spoken out against the attack, claiming that they will not tolerate this sort of abuse. They also revealed that police were called to the scene, but the Pride-goer didn't want to press charges.

The Mayor of Barcelona, Ada Colau, also spoke out against the incident, saying: "Homophobes are not welcome in our city, we will work side by side with LGTBI groups and we will not tolerate any discrimination."
20%

$7.74 $6.19
Buy Now
See More Deals
We hope you find these deals as awesome as we do! Just an FYI: we may receive a share of sales from links on this page