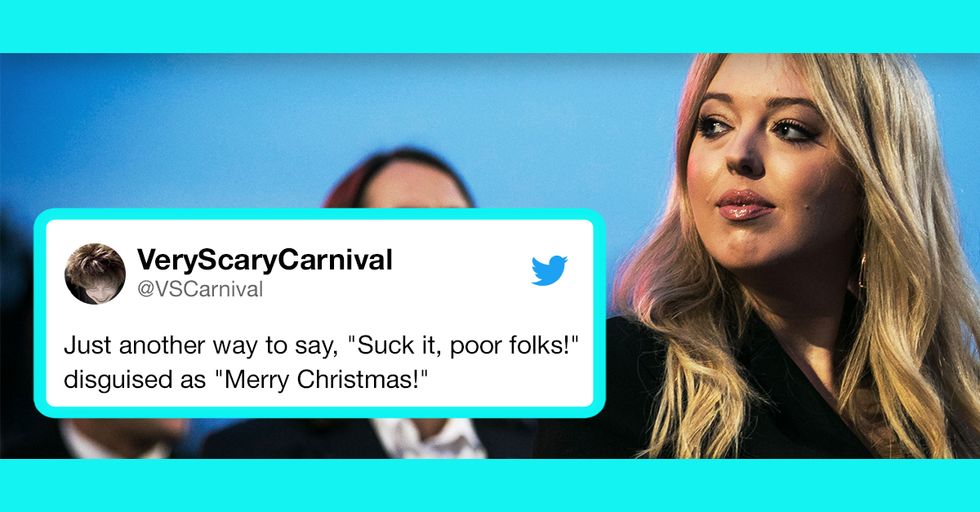 Tiffany Trump isn't exactly the most high-profile member of the Trump family, but that doesn't preclude her from totally getting piled on by the Internet when she makes a mistake.

The Trumps are a family of black sheep, and somehow, Tiffany has managed to be the blackest of the black sheeps. Does that make her good or bad? Is she Darth Vader or Luke Skywalker? Wherever she stands, she pissed off a lot of people on Twitter when she posted a certain Christmas video that featured her and her sister Ivanka. When you see it, you'll know why.

Tiffany has sort of managed to separate herself from the rest of the Trump clan.

Maybe it was that she's the only child from Trump's marriage to Marla Maples. Maybe it's that her father joked to Howard Stern about wanting to have her aborted.

Maybe it's that she's just a young kid thrown into a terrible situation and not, you know, a calculating criminal, like her sister and brother-in-law.

Whatever it is, Tiffany has mainly flown under the radar since her father took office. And that's hard to do when your last name is Trump.

She's in school in D.C. at Georgetown Law, and she pops up every once in a while at White House functions.

We assume it's to help the rest of the Trumps appear like functional, reasonable human beings. Even though Tiffany's presence really isn't helping the cause, it's a noble effort on her part.

When she's not posing for official White House portraits, Tiffany is living it up with Instagram filters.

She's all about them. And it was her latest filtered Instagram video that got her in all this trouble.

While lounging at Mar-a-Lago for Christmas, Tiffany posted this video of her and Ivanka soaking up the sun.

Almost every response to Tiffany's video is critical.

Many believed duckface/scantily-clad aspects of the video just weren't what you'd call "classy."

Others called her out for not getting into the real Christmas spirit.

This video just screamed, "White privilege!" at the people who watched it, and it's not hard to see why.

And the effect of the video is exponentially worse when you consider who Tiffany's father is.

Trump is going to save millions with the new GOP tax bill — meanwhile he's completely screwed over middle-class American families who need the most help.

In the midst of all the crises Trump has created, it was more than a little insensitive for his daughters to flaunt their wealth all over the place.

@TiffanyATrump @IvankaTrump You and your family are so out of touch with reality. Enjoy your vacation while people struggle every day.
— TheLorac🤦🏻‍♀️🌈 (@TheLorac🤦🏻‍♀️🌈)1514318497.0

It's just another example of how the Trumps don't have the best interest of the American people at heart. They are only concerned with making their lives as luxurious as possible.

The worst part of this whole thing is that Tiffany is still the least terrible Trump.

She should take a cue from this Twitter user and go back to posting videos about snow. Tiffany — you have managed throughout all this to not be completely hated by everyone. Don't screw this up.