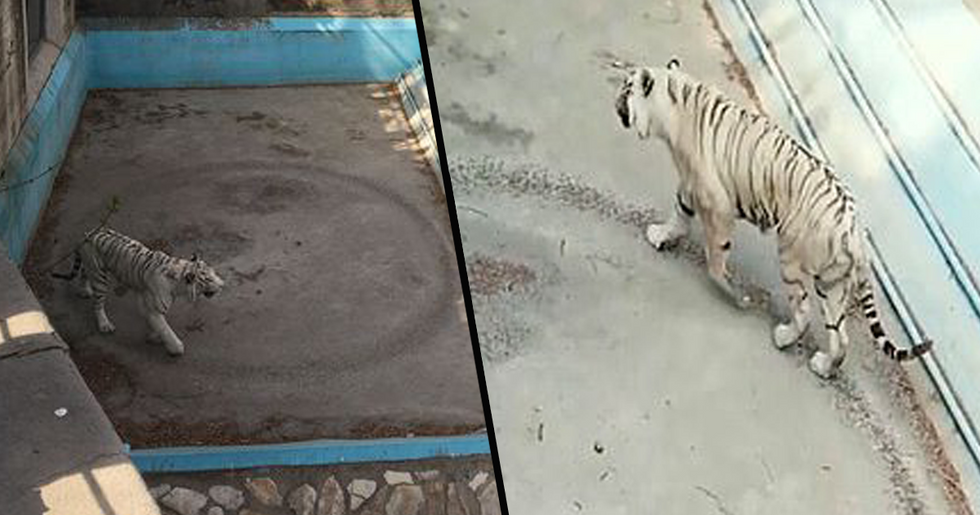 The most important thing to recognize when keeping animals in captivity is mimicking their natural environment, similar to what they would experience in the wild. Sadly zoos are the worst culprits for violating this rule, and despite the endless bad press, things just aren't changing.

A zoo in China has recently faced criticism after leaked footage has shown a distressed tiger doing the saddest thing in his enclosure.

Keep scrolling for the chilling video...

Over the years, there has been an endless debate over the humanity of zoos, and the latest video to emerge from Beijing will trump any argument.

And whilst animals are the ones who pay the price, visitors can also suffer.

Tatiana, a Siberian tiger, escaped her substandard enclosure at the San Francisco Zoo in 2007 and was shot to death after she killed one person and injured two others; she had mauled one of the zookeepers a year earlier.

The story of Tatiana isn't the only incident wherein an innocent animal has been killed simply becuase it isn't natural for them to be in an enclosure.

A gorilla named Jabari tried to escape from the Dallas Zoo by jumping over walls and moats and evading electrified wires, only to be fatally shot by police; a witness later reported that teenagers were taunting the animal with rocks prior to his escape.

Animals endure great deals of stress, fear, and anxiety when locked up in zoos.

But despite the recent documentary series Tiger King, exposing animal parks for what they are, nothing seems to be happening to stop animals being caged in zoos.

While tigers have adapted to live in a number of different habitats, including both grasslands and rainforests, they weren't expecting to have to adapt to life in cages.

In the wild, these solitary creatures have up to sixty-miles of territory to roam.

That's far less space than we have in our house...

And I don't know about you, but I know how frustrated I've been locked up at home.

Tigers are an endangered species.

Due to an increase in hunting and poaching, global tiger populations have dwindled significantly. At this point in time, there are more tigers in captivity than there are in the wild.

Their suffering has only increased as the demand for tiger selfies on social media has grown.

The latest zoo to come under fire is Beijing Zoo in China.

Just last month a customer left a two-star review about the giant panda enclosure, saying: “Mostly living in cages, very distressing to see a mother with her baby walking round in circles as their cage [is] so small with nothing in it."

Which is just the first of many negative comments made after a distressing video was released of a tiger in their care.

Disturbing footage of a white tiger walking around its tiny enclosure in circles has shocked viewers across the world.

The clip has been seen more than 10million times in just 48 hours.

It shows tourists peering down at the solemn tiger as it continues to pace in circles around its outdoor exercise area.

Worryingly It continues to create large circular marks on the ground with its unchanged path.

Beijing Zoo has given a statement reporting that the tiger has been given “psychological counseling" after its handlers noticed the behavior at the end of March.

But pictures posted by social media users showed the tiger still doing circles in the first week of April.

Last week images released by the zoo show the creature in another enclosure, where it has reportedly been offered other activities to increase stimuli. For some strange reason, I really don't by that...

It's amazing what some bad press can do to motivate change, especially when money's involved.

People were left horrified at the footage... Causing one viewer to comment: “This tiger looks depressed," While another said: “Zoos are prisons for animals."

A third just straight-up called the zoo out, saying: “Sigh, the zoo still hasn’t directly responded to questions about the tiger’s mental well-being."

Hopefully, this will make people more aware of the damaging effects solitary confinement has for majestic creatures like this. Surely now we're all experiencing it, we can sympathize with them? Keep reading to find out what one zoo is considering doing with its animals during this pandemic... It's just plain murder!