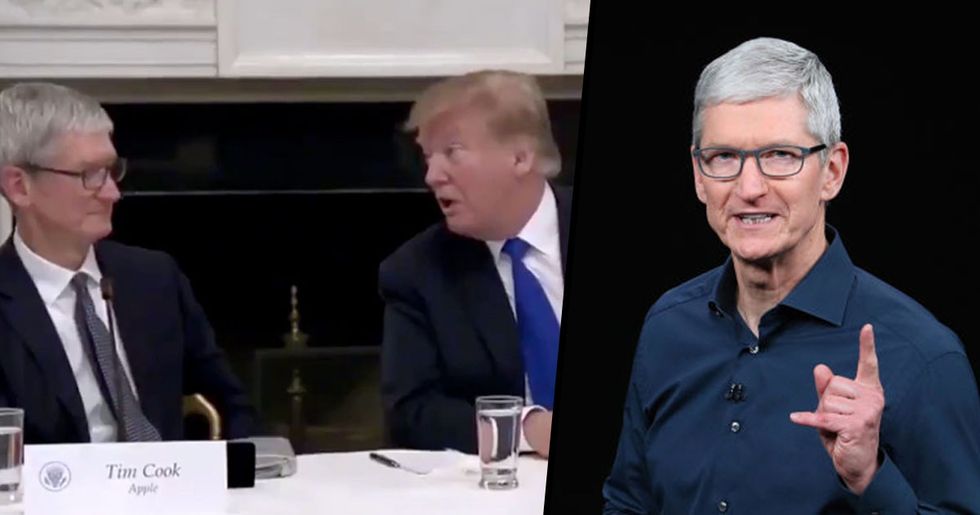 Tim Cook Changes His Name to 'Tim Apple' on Twitter

Even when he tries to be nice, he's not.

On Wednesday, President Donald Trump attended a meeting, together with Apple CEO Tim Cook. And you know that when Trump meets technology trouble awaits.

Tim Cook joined a long list of A-list executives whose names Trump has mispronounced. He referred to Cook as "Tim Apple." You could forgive Trump the hilarious mistake if only the list wasn't so long.

Within 1 year, Trump confused the names of Lockheed Martin CEO, Israeli Prime Minister, reporters, and even his own co-workers.

Trump's remarks may get less and less surprising, but responses to them only get better.

Wednesday's meeting inspired people to come up with hilarious jokes that are so funny it hurts. But the best response was that of Trump's latest victim, Tim Cook. And now he has the perfect comeback...

Trump made yet another hilarious headline when he, once again, called another important person by the wrong name.

Especially since he's been telling everyone how great a memory he has for names.

How can you forget the name of the most important man in every millennial's life?

During the meeting, Trump called Tim Cook "Tim Apple" while praising him for the work he's done for America.

"We're going to open up the labor forces because we have to," he began.

"We have so many companies coming in people like Tim, you're expanding all over and doing things that I really wanted you to, right from the beginning."

"I used to say, 'Tim you've got to start doing it over here.' And you really have," Trump added.

And then he said it.

"I mean you've really put a big investment in our country, we appreciate it very much, Tim Apple."

Unaware of his mistake, Trump continued, "But we're opening it up. We have to bring people in."

Business Insider says it simply could have been just "awkward phrasing."

Maybe he meant to thank Tim and Apple in sequence. Place an implied comma between the two.

But it's not the first, and not even the second time, he called someone by the wrong name.

She's a top defense executive! He should know these things.

Marillyn Hewson attended the meeting to show her support for the US plan to impose tariffs on imported Chinese products.

Introducing her, Trump said, "We have some of our great business leaders, and leaders period right behind me."

"I may ask Marillyn Lockheed, the leading women's business executive in this country, according to many."

He then continued to talk about Lockheed Martin's F-35 like nothing happened.

"We buy billions and billions of dollars worth of that beautiful F-35. It's stealth. You cannot see it. Is that correct? It better be correct."

At the same conference, he referred to Benjamin Netanyahu, Israeli Prime Minister, as "Betanyahu."

Trump can't even get his co-workers' names right!

At this point, Trump’s words don’t really surprise anyone anymore.

But one thing we will never get enough of is the jokes that follow any news involving the president.

Here are the best of the best. You're welcome. Aaron Simmons said on Facebook, "Our president is a special kind of stupid.??‍♂️"

Mohammad Ahmad: "Apple CEO should have referred to Trump as Mr. Orange ?"

Ong Kee Pin: "And we know he’s not a fan of Jeff Amazon and has a testy relationship with Elon Tesla."

Eylard Wurpel: "I am really impressed that all the people around him never laugh at him. I would piss my pants all the time ?"

Arn Lisnoff: "...and did he send his regards to his grandma, Granny Smith?"

Hislermania: "He just thinks everyone names their company after themselves like he did."

Gonzy: "Steve Mac is rolling in his grave rn."

Sean Dower: "Tim Cook. Should have replied Thank you Mr Donald Duck." Rayban™ replied, "That would be an insult to one of our favorite childhood past times."

Hey, It's Me! ?: "Thank you, Tim Apple. I’m president Donald Putin, this is my daughter Ivanka Chinese-Patents."

Shell_zipi continued the thread, "And this is my son-in-law Jared Cut-the-Journalist."

Mat Honan said, "I have watched this thousands of times in a row now and I'm still laughing."

To which Mike Stephen replied, "I'm laughing cos I'm in the UK and don't have to suffer him. Then I remembered Brexit and stopped."

But Tim Cook’s response was the best.

That is, no response at all. He just nodded along. Since Trump got elected, did they start giving "composure" training to everyone who's about to appear with the president on camera?

If you look really close, you might notice that it took Tim Cook a second to register what Trump had just called him.

But it didn't surprise him at all. He had probably come there expecting something much worse.

Or maybe he wasn’t even listening to Trump.

Just nodding his head like we all do when we don’t understand what the other person is saying. Or anytime Trump speaks.

But Esquire saw the real "micro-drama" happening at that moment.

Tom Nicholson wrote, "Nodding gamely along with Trump's semi-lucid attempts to crowbar himself into the Apple success story [...] Cook's on autopilot."

"Just ride it out. You'll get to chat to some proper adults soon. Nod, nod, nod."

"After one big nod and a murmured 'thank you' to show that he's definitely listening to Trump's blithering, the sucker-punch lands: 'We appreciate it very much, Tim Apple.'"

"The jaw stiffens. Tim Apple turns ever so slightly toward Trump. Did... did he just say Tim Apple? My first name - Tim - and then the company I work for - Apple - instead of my surname?"

"The nodding has started to tail off. It's a distracted head-wobble now. Has he done some complex word association from Cook to cooking to cooking apples to apple? Does he think I've married a multinational technology corporation?"

"The nodding is over. Tim Apple. Like the hearty and wholesome hero of a children's book about an enchanted orchard."

"Maybe he's setting himself up for a Twitter rant that's brewing somewhere in that dome, and he's road-testing new names for me. Crooked Hillary. Lyin' Ted Cruz. Noddin' Tim Apple."

"There's a frown now, desperately trying to burst out, but Cook's whole face is on lockdown."

"The chin's in damage limitation mode. His brow is solid granite." "Just stare at the White House floor. Stay cool, Tim. You'll be out of here soon enough."

Just one day after Cook got his own back with a subtle Twitter change.

The Apple CEO replaced his last name with the Apple logo. Incredibly done.