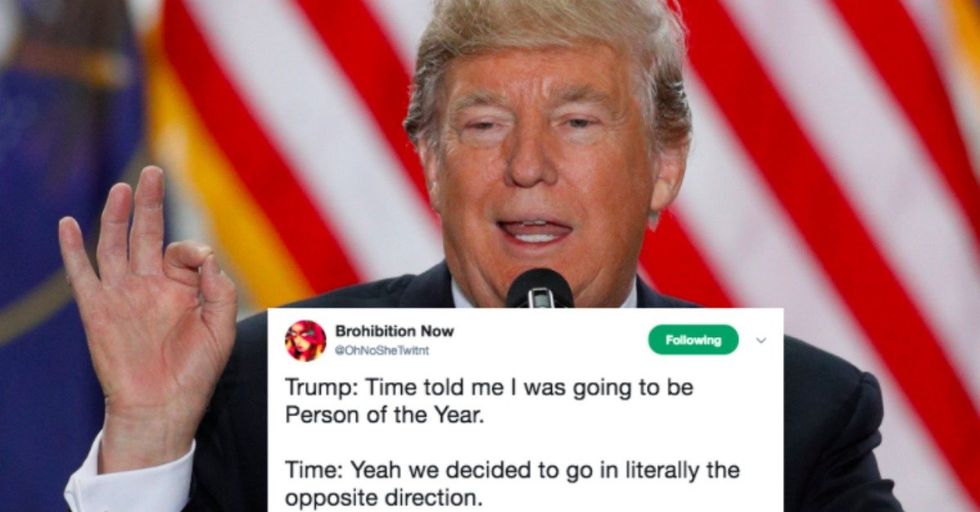 Donald Trump and TIME Magazine have a checkered past. They're sort of like that high school couple that breaks up and gets back together every five minutes and is exhausting and annoying. But it might be over for good now. TIME Magazine just announced it's 2017 Person of the Year, and it's pretty much as far in the other direction as you can get from our president. ...Or it might be too close for comfort. Either way, we think it's safe to say that President of the United States Donald Trump is probably not too happy about who received the honor in his stead.

Trump's been tweeting about TIME Magazine's Person of Year since even before he was in charge of the entire country.

Back in 2015, Trump threw a fit because Angela Merkel, the Chancellor of Germany, received the honor despite the fact that he was "the big favorite." This begged the question, "Who is going around saying Donald Trump is the 'big favorite'? We must stop this person."

In 2016, TIME broke down crying at its locker and took Trump back, naming him its Person of the Year.

He had just won the presidency in an election that was historic for many reasons, not the least of which was that a businessman and reality TV star with absolutely no political experience beat out 16 much more qualified candidates to become the nominee of his party, and then he beat out possibly the most qualified person for the presidency because she happened to be a woman.

Needless to say, Trump was thrilled that he and TIME were back together.

He thanked the magazine for the honor, but it seems that he failed to notice the text that accompanied his cover photo: "President of the Divided States of America." Sure, TIME's Person of the Year is the one who's made the biggest impact on our nation, but that doesn't necessarily mean it's positive impact.

This year, the saga continued. Trump played "hard to get" when he tweeted this nonsense about the 2017 Person of the Year honor:

He made it seem like he graciously backed down from their offer, but as with many bold statements that Trump often makes, there was another side to the story, one that completely rejected his side as a bald-faced lie.

Following Trump's tweet claiming that he "passed" on TIME's offer for 2017 Person of the Year, TIME's Chief of Content tweeted this:

"Amazing. Not a speck of truth here." That seems to be Trump's M.O. — he makes bold claims, thousands of people contradict him, and he takes no notice of the truth. TIME has just named its actual Person of the Year for 2017, and it's definitely not Trump. So who is it?

It's "The Silence Breakers."

"The Silence Breakers," the women and men who've come forward to share their experiences of sexual assault and out their abusers, are TIME's Person of the Year. The story features such brave souls as Ashley Judd, Rose McGowan, and Tarana Burke, the founder of the #MeToo movement.

The best aspect of this project was described below by Charlotte Alter, a national correspondent for the magazine:

"The Silence Breakers" are TIME's Person of the Year as opposed to Donald Trump, who's been accused of assault and harassment by dozens of women.

It's safe to say that TIME — if it considered Donald Trump for its Person of the Year at all — ultimately decided to go in a very different direction.

And much of the Internet is applauding. But TIME wasn't quite done yet making waves with their announcement.

Not only were these strong women and men named TIME's Person of the Year, but Donald Trump...

Well, Donald Trump was runner-up. Number two. The loser, if you will. And he is someone who absolutely hates losing. That's got to sting.

Some though, were understandably confused by TIME's decision to name sexual assault victims its Person of the Year and name a sexual assaulter its runner-up.

TIME made two bold decision in naming its Person of the Year and its runner-up. Some are wondering what they were trying to accomplish by including Donald Trump at all. Others are just immensely proud of the women who graced the magazine's cover and the strong people highlighted inside. Where do you stand on TIME's decision?