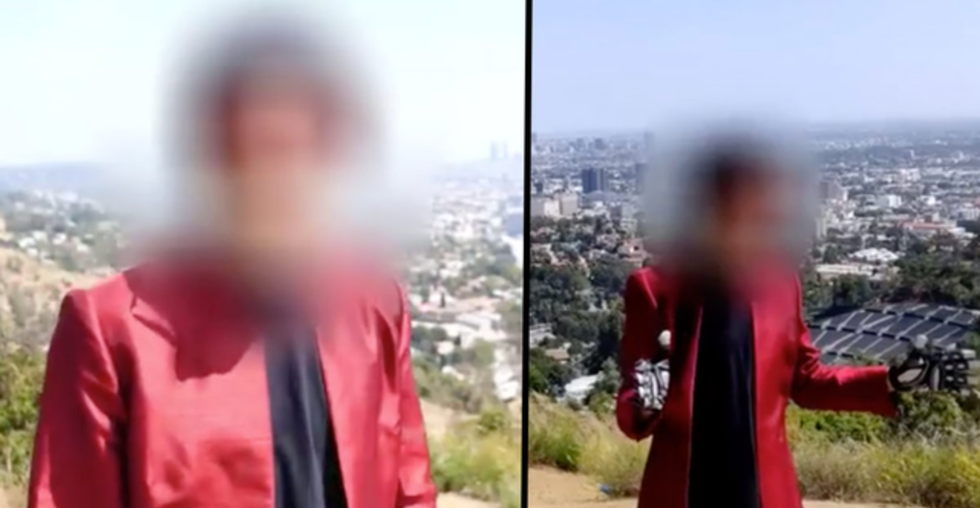 Scientists! Lay down your machines! Surrender your ingenuity! We don’t need you anymore. We’ve got time travellers… or rather ApexTV has time travellers - two, in fact. After a YouTube video of a "time-traveller" passing a lie detector test went viral earlier in the year, a second temporal manipulator has honoured us with his unlikely presence. The latest time traveller, a guy called Casper from the year 2075, has travelled fifty-six years back in time to make an appearance on ApexTV, in which he stands on top of a hill overlooking LA and rambles incoherently about the years to come.

Keep reading to hear more about this crazy story.

One brave traveller dons his best red jacket, sets the dial for 2019, and launches off, a little anxious not to be late for his scheduled appointment with ApexTV.

Kasper is among us…

And he’s not the first…

There was this guy, two months ago, in March. Alleged time traveller, Adam Archon, actually managed to pass a polygraph test.

And there was Nostradamus.

He never claimed to be a time traveller, but he did make a number of startlingly prescient predictions: including the fall of the Twin Towers, the breakup of the Soviet Union, and the Kennedy assassination.

Oh, and Paul the Octopus.

Paul travelled back in his Cephalopod time machine in order to predict the results of the 2010 World Cup.

Time travel is a far more recent concept than you might think.

The phrase "time travel" and, consequently, "time traveller" was actually coined as late as 1895 by H.G.Wells, in his fanciful novel, The Time Machine.

The idea has a lot to do with our perception of technology.

It took until the late 19th century for us to fully grasp the concept that technology is expanding at a persistent rate. If you were to ask someone from the 1750s what they thought life would be like for their grandchildren, they’d likely tell you "much the same." However, if you asked that same question to a person from the 1890s - Wells' time - they’d tell you that they had no idea. This kind of wonder allowed for the conceptualization of the time machine.

This is all explored superbly in...

The yearning to travel back in time is always steeped in regret. It exists to right the wrongs of sentimental, penitent existence. Time travellers never go back in time to deliver good news. They attempt to right wrongs: declaring long lost love or pre-emptively slaughtering infant monsters.

Very soon after Wells' The Time Machine was released, a critic laid into him complaining - what if you were to travel back in time and encounter yourself, would the paradox cause you to disappear forever? Or would you be trapped in a never-ending existence-loop?

History is a sequence of turns.

At each turn, something inconsequential or momentous could follow. You never know what minor act could change the course of human history.

Would you kill baby Hitler?

Jeb Bush says, “Hell yeah!" But, in reality, you’d run the risk of possibly replacing future Hitler with an even more dangerous power further down the line.

The key problem with the concept of time travel lies in something called "The Bootstrap Paradox". Here’s a charming video explaining it.

And there’s the famous "Butterfly Effect".

Best surmounted in our favorite episode of The Simpsons. I wish, I wish, I hadn’t killed that fish…

In most fiction they ignore the problems of time travel.

As explained eloquently by TV’s Doctor Who.

Now that you’ve been briefed a little...

His main warning regarded the city of L.A.

Which he said would be underwater come the year 2060.

With rising sea levels, and taking into account the low-lying rock that provides the foundations of the city, this isn’t all that surprising.

Apparently, Los Angeles will be preserved in an enormous underwater bubble - an idea clearly stolen from George Lucas’ The Phantom Menace.

The flood is preventable.

Yes! We know! Green activists have been telling us for years now. Can we please do something about it?!

The IPCC actually predicts 10 feet of rising sea levels by the end of the century. Which would be absolutely catastrophic. But, according to Kasper, the whole city would be underwater - including its tallest 700ft tall building...

Apparently, in the future, national borders will disappear, everyone will speak the same language and practice the same religion.

Yes, the future is an international Trotskyist utopia.

Except for the religion part. Republicans must be quaking in their boots.

We’ll all be time travelling soon.

Apparently, time travel technology will be available to the public by 2028.

And explains why this bozo was able to turn up where and when he did.

Aliens will become visible to the public in the future. Which we're pretty excited about.

The world in 2075 is run by sentient AI overlords. Which we're down for; politics need to be more calculating and logical.

We have a couple of questions…

First - are those gloves from the future and if so, why didn’t he bring back more of them? We want some.

Second - why is he masking his identity?