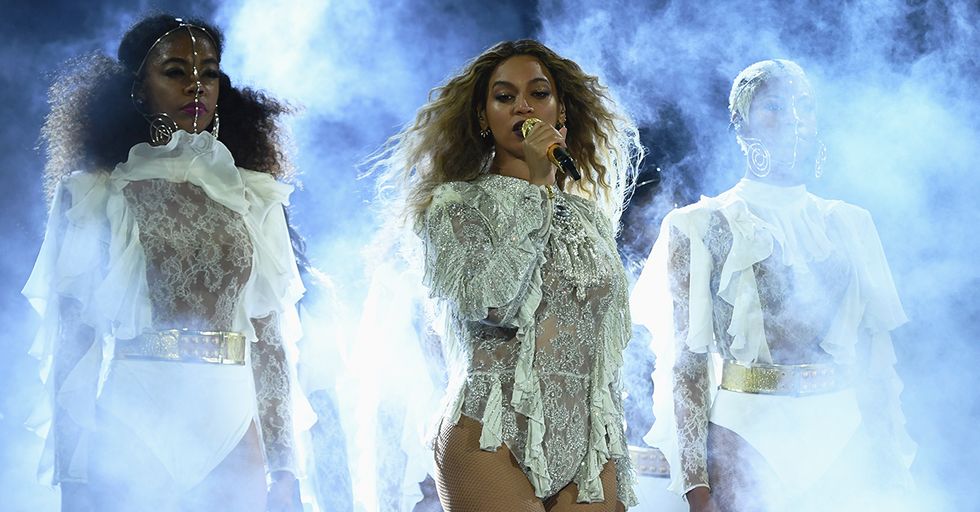 I don’t think I know someone who dislikes Beyoncé. You either love Beyoncé or don’t care much about Beyoncé.

How does that old T.S. Elliot quote go? Good artists copy, great artists steal? Well with 22 Grammys and 63(!) nominations, it seems like Beyoncé might be the best of the best at… ahem, “borrowing" from other artists.

She has won the second most Grammys of any female artist ever.

Second only behind Alison Krauss, a bluegrass musician who won her first Grammy when she was 19. So we can make another article about her later.

But she is not without her faults.

Even form her Destiny’s Child days, she’s been accused of stealing. Both from other artists, and from group-mates!

And she’s not afraid to get her family involved.

Like this first one. During Beyoncé’s Destiny’s Child days she enlisted the help of then-manager and father Matthew Knoles. The song went on to become one of their biggest hits.

She stole the Destiny’s Child song “Survivor" from an unknown producer.

According to Billboard, in 2003 Miami producer Terrence “T-Robb" Robinson sued Destiny’s Child for stealing a song he called “Glorious" after sending it to Matthew Knowles.

The producer dropped the suit and they settled out of court.

Phew. Can’t let that stuff get out. But hey, steal one song and get away with it and maybe you’ll learn your lesson, right?

She doesn’t just steal from no-name producers, she also steals from no-name singer-songwriters. Like this story from 2005.

In 2005 Knowles was sued again for lifting the hook from a demo that was sent to “people thought to be associated with Beyoncé Knowles". She never got a response from Bey’s people and didn’t get her tapes back either.

Bey was found innocent because they couldn’t prove she’d ever listened to the tapes.

Fair enough, but the songs are pretty similar. But wait, there’s more.

She was also accused of lying about her biggest hit on her debut solo album.

Beyoncé, why? We want to love you!

Crazy in Love was actually written by producer Rich Harrison in TWO HOURS.

All while hungover. According to Harrison, Beyoncé heard the demo and told him to get to work, saying, “I love the idea. Now write the song. I'll be back in two hours."

Though in an interview with Vanity Fair, Beyoncé claimed, “‘Crazy in Love’ was really hard to write because there was so much going on… I mean, I had written—what?—seven, eight number one songs with Destiny’s Child, in a row?"

This wasn’t the only time she claimed to write a song written by a producer.

Although, you should have guessed that by now. The crazy thing about this one is that she took the song from a fellow R&B singer.

Just to give you some flavor of what could have been.

“I honestly wrote that song for myself."

In an interview, Ne-Yo said, “I honestly wrote that song for myself. However, a man singing it comes across a little bit misogynistic, a little bit mean" adding that Beyoncé, “put her own spin on it."

She also lied about using that famous Stevie Nicks song.

Everyone knows and loves that famous riff from Stevie Nicks’ song Edge of Seventeen, including Beyoncé!

It was sampled heavily in Destiny’s Child song Bootylicious.

And Stevie Nicks was even in the music video! So what’s the problem?

Well, Bey lied about where the sample came from.

In two separate interviews, Beyoncé claimed that she “discovered" Nicks song which reminded her of a “voluptuous woman". She decided to write Bootlylicious based on that. Keep reading to find out who she stole this idea from!

She stole the idea from another producer. This time Rob Fusari.

Rob called Beyoncé’s father after hearing her talk about the sample in interviews. Matthew Knowles fired back saying, “People don’t want to hear about Rob Fusari, producer from Livingston, N.J. No offense, but that’s not what sells records. What sells records is people believing that the artist is everything." Which like, fair enough…

But what about her music videos?

After all, she does make some of the best videos of all time. Of all time! Yeah, she steals those too.

She stole parts of her Countdown music video from a Belgian choreographer.

Beyoncé. Why? You have infinite money. Just like, you know, hire someone to do something new.

Watch the side-by-side to see exactly what Bey lifted.

Okay, that video was pretty weird, but there’s no denying that one. Even the most hardcore fan of Queen Bey has to admit that’s a rip-off.

And it’s not the only time she’s ripped off dance moves.

She copied some moves for her Formation World Tour that she’s now kinda famous for. Keep reading to find out.

Those famous Beyoncé stomps? Those are stolen too.

Choreographer Marlyn Ortiz called out Knowles on IG pretty directly, saying, “It's ok to be inspired but at least make the effort to make it your own." Well damn.

That’s got to be it, right? That’s like 100 things. There’s no way she stole like, say, and entire live performance.

Hahahahaha you sweet summer child. Of course, she did. She’s Beyoncé!

Beyoncé. Stop. These things are on video! You can’t get away with them!

And she admitted it!

She later said, “My makeup artist showed me the performance of Lorella Cuccarini a year ago, and it inspired me so much". Well, damn Beyoncé. She admitted to stealing the moves, AND confessed that someone else showed them to her? I’m impressed.

Is Beyoncé deserving of criticism or does she still Run the World? For me? Love On Top is still my go-to workout jam and no one can take that away from me. At least she didn’t lift that song… Please.