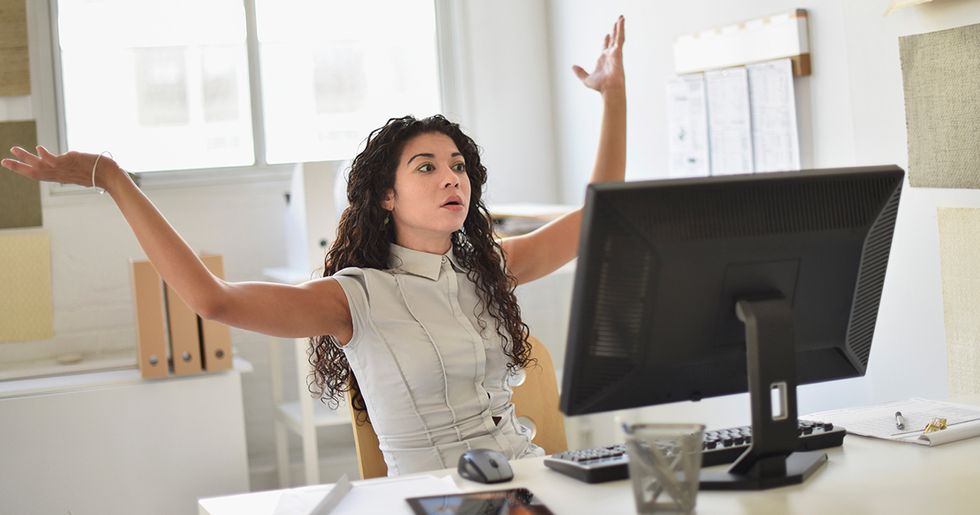 DIY Fails So Bad They're Frightening

Some people should just buy things.

They shouldn't try to make things themselves because when they do, they end up with horrifying products that haunt our nightmares.

These DIY projects will make you have so many questions, but the main will be:

They're not good. They're disturbing. They'll make you question the sanity of their creators. Enjoy.

Someone right now is tearing apart their room going, "Where is my other orange flip flop?!"

Well, I know what I'll be haunted by in my nightmares tonight. For the record, I believe this is a Furby with a paper-machéd Homer Simpson over it.

Why would you ever?! And like, come on! At least paint the nails a bunch of different colors.

This is exactly what it looks like: A shirt made out of old Adidas and Nike socks. The next one is a strange use for cow horns.

That is quite the guitar. Don't mind me when I say that I absolutely hate it.

Does it make it more or less creepy to know that this was made by a 12-year-old girl? I haven't decided.

Thomas the Tank Engine is supposed to bring joy to children everywhere, not transport supplies and nightmares in some weird Max Max universe.

This is maybe the ugliest thing I've ever seen. And the fact that it's being sold for $240 is laughable. No thank you, times a million!

First of all, why Vaseline? Second of all, "so Worksey"? Hilarious. The next one will make do a double take.

I love dogs. I think they are special, magical creatures. I think even the ugly ones are cute. This is not cute.

This table runner made out of a garbage bag is the definition of trashy. Why would you do this?

There is no purpose for this except to say, "Hello there! I am extremely strange, and I wanted you to know that I am strange and that is the sole reason I made this."

I think the expression on the deer's face says it all. This was not meant to be.

You can't buy a new couch! That's ludicrous! Two-thirds of the couch is perfectly usable. The next one sure is special.

Yes, those tires are spray-painted gold. And call me crazy, but I think those horns are going to obstruct your view while driving.

Why would you ever make a cookie that looks like a bloody Band-Aid? I can think of no good reason. None. Zip.

Yes, that's right. This right here used to be a minivan. Then, the kids grew up, and dad decided to shave the top off the back and convert it into a pickup truck. You know, instead of just buying a pickup truck.

This nightstand was a little too short for this guy's liking, so instead of lengthening the legs or propping it up on some boxes, he nailed it to the wall.

First, catch yourself a mosquito. Then, smush that mosquito, but not too much because you don't want its guts to spill out before you trap it in your nail.