Times Men Perfectly Summed Up Parenting In a Tweet | 22 Words 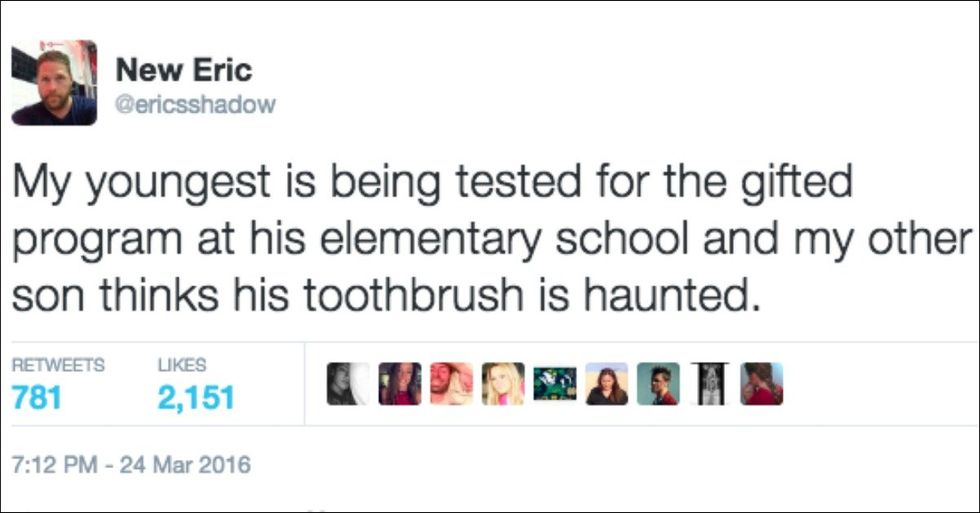 Times Men Perfectly Summed Up Parenting In a Tweet

Fatherhood is no joke but, in order to survive it, you do have to keep a sense of humor. And dads, God love 'em, are normally known for their corny sense of humor.

But these guys here? They don't mess around and sugarcoat things. They're hilariously honest about being a dad, and thank goodness, they tweet it out.

If you ask me, they're all vying for "Dad of the Year."

The nightmares are everywhere.

And how fitting is that with the new IT movie coming out? Way to be topical, dad!

It only took 18+ years to get that damn car seat right, but you finally got it right and that's what counts. Persistence.

But at least have a little patience for your own kid's party! Or at least pretend. Parenting involves a lot of pretending.

Gee, I wonder why?

Have you ever heard the phrase "nature vs nurture"..? Because this is probably the best example of that ever.

But you might just be hearing things... or your daughter has it all figured out.

Ryan Reynolds is the perfect dad.

And by perfect dad, we mean perfect looking dad.

Instead of "lying" most parents would probably prefer the word "pretending." Parenting involves lots of "pretending," like Santa Claus, the Easter bunny, the Tooth Fairy, etc... Come to think of it, why do people lie to their kids so much?

This is a father who cares.

Also, shout out to box tops. Those are a thing I haven't thought about in forever.

Or how many people you both hate.

It's gotta be tricky to find a name that hasn't offended at least one of the parents throughout their lives. Maybe that's why a bunch of really "unique" names have been on the rise?

The day your child realizes that you have no idea what your talking about is the day they become an adult.

The true mark of adulthood is realizing that no one actually knows what they're talking about, and we're all just winging it.

"And if they have touched it, it can't be fixed." Kids are like little atomic bombs just waiting to destroy.

Listen to your father, kids.

He's a wise man. Perhaps the wisest of all the parents so far.

It's important to teach your kids to share. Even if it's sharing swear words with other people.

Hopefully your baby doesn't have a giant hole in the middle.

Otherwise, you might want to take it back to the store, assuming you still have your receipt. Wait, babies don't come with receipts?

Eventually, you'll have a few moments throughout your life that will suddenly make you understand your childhood. We call those "moments of clarity."

Parenting will wear you down.

Much like anything else. Except parenting is worse, so if you aren't cynical to begin with, you will be by the end of it. Enjoy.

Because for the next 18 years your life doesn't exist. Enjoy that too!

Sir, I think your kid might be a genius.

They could make the tape out of cheese or something. Protect this child at all costs.

At some point, yelling becomes the only way your children will hear you. So you better start busting out those vocal warm-ups, because you'll be putting a lot of strain on those vocal cords.

That's probably still better than some of the parents that actually "try."

At least he's concerned for their safety... right?

You don't want to end up on the naughty list. Don't ask, you just don't.

Remember when we said there would be a lot of pretending?

Well, get ready to pretend your way through all of your child's epic tales. Your kid will tell a story as long as Homer's The Odyssey but somehow never actually finish the story. Hope you like cliffhangers.

Know your kid's strengths and weaknesses, I guess. But on the bright side, you'll both save a ton of money!

And you're just another bad decision.

That is some pretty solid father-son advice. The world needs more dads like this.

Unfortunately, your kids probably won't get that.

Back to that whole "pretending" thing...

It's not lying, it's pretending with style.

Dad of the year award goes to...

Oof. More like savage of the year. It might be in your best interests if you were adopted, kid.

That's like leaving little demonic bread crumb trails. Twisted, but it could work.

Get ready, because it's gonna be story time for a while. You can always tune out and drop in the occasional "uh-huh", but you always run the risk of kids asking insane questions, so be on your toes.

Once you have kids...

You'll take "me" time any way you can get it. Even if it does involve the world's most elaborate game of hide-and-seek.

Well... your second kid is creative at least!

Maybe he only "thinks" his toothbrush is haunted because he doesn't want to brush his teeth! He might be trying to pull a fast one on you and ya don't even realize!

And also kiss your money goodbye. And your hobbies. And fun in general.

Maybe your son just wants to be a DJ?

Party at DadandBuried's house! His kid has the music and lights covered, we'll bring snacks.

Nothing is scarier than a mother's rage.

As a father, you know that. And as a kid, you know that. So you can at least take solace together in the fact that neither of you wants to face that rage. Be sure to share this story with all the awesome (and hilarious) dads you know on Facebook.