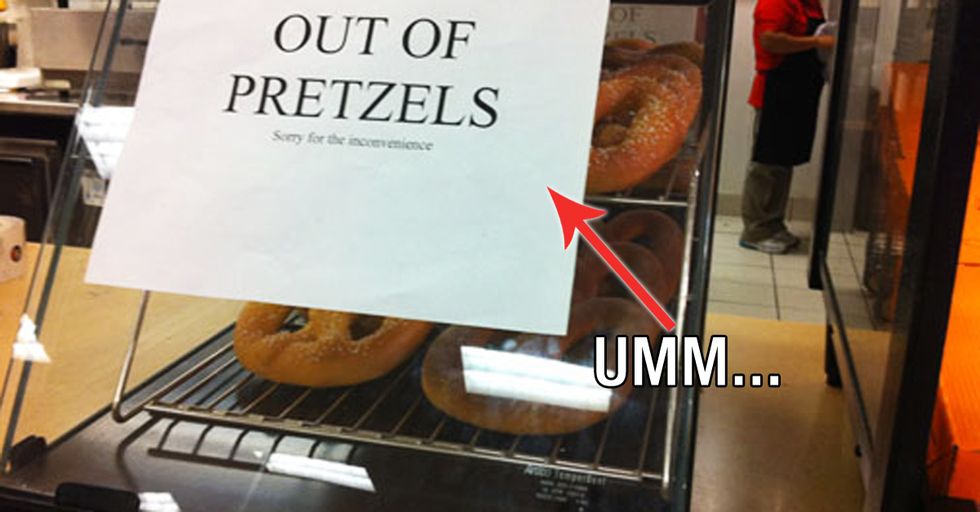 Going to the store can be a pretty mundane experience. Well, unless you happen to come upon an epic fail in your pursuit of purchases, at which point it becomes highly entertaining.

But before you lose all hope, there are also a few brilliant ideas on display at the end...

Let's see...we can buy two of them at regular price for $4 or take advantage of this great sale and get 2/$5. What's the financially healthy choice?

Placement is important, people. At the very least, put wieners where you say there are wieners. I see a lot of pickles...

via: Funny or Die

Their color is the name! How hard can it be?

I guess I've been going to the wrong kind of picnics because usually the only kind of protection I need is bug spray and sunscreen. But better safe than sorry!

Maybe also pack them for that picnic? But seriously. What kind of picnics and parties are these people going to?

For the mom who has everything, including a high libido. Then again, maybe she's just into picnics.

Now I'm not sure what kind of school you went to, but where I went we were given plastic sporks, not weapons. Maybe "back to culinary school?"

What's your favorite flavor of pudding? Yeah, I think I'll stick with vanilla.

via: Funny or Die

Commit to be fit! Power up with powdered sugar pastries!

A disturbing new form of Meow Mix — literally. Run kitty, run! Run as fast as you can!

via: Funny Or Die

Spelling is hard. Maybe instead of Cheerios they should be looking for Marshmallow Alphabets?

The employees weren't too happy about the extended hours, as you can imagine. But no other store is open nine days a week, 25 hours a day.

"Can I get a price check on the dried crack? No, not the liquid form, the dried stuff from the baking aisle."

Who doesn't think "bacon" when they think "Passover"? You know, to make those traditional matzah bread BLTs.

I don't think they know what that word means. Well, unless they're talking about the cooler. That's legit.

You ate fruit! That's awesome! Now come eat that fruit baked into a sugar bomb of a cake as a reward!

Aisle 4 is stocked with political incorrectness. I believe the correct term is, "Caucasian Americans."

Witness the power of cause and effect Does anyone else suddenly have the munchies?

Seriously cheaper! We're slicing our prices like we slice that wafer thin ham. Come and save a pretty penny!

Now it's not for me to judge, but I suppose that's one way to get them to sleep. Bottles up!

That is not watermelon. Last time I checked the succulent summer fruit was not yellow, full of kernels, and covered with silk or a husk.

Sigh...that is also not watermelon. To be clear, watermelon LOOKS LIKE THE PICTURE ON THE BOX.

Well, that's rather suggestive. I guess they just want you to be prepared.

Umm...are you sure? Because from where I'm standing I'm looking at a couple of pretzels.

When life hands you lemons, make orange juice. And look at the watermelon corn right behind them!

I think the first step would be walking away from that table. No questions asked.

Sorry Campbells, but that sounds pretty crappy. Plus, you know, I already have my own bowels.

via: Go smell the coffee.

Also known as "bananas." But it’s not all bad. Sometimes stores are full of brilliant ideas.

Like letting you take one to sip as you shop. Just remember not to drink and drive your cart — or anything else.

And sometimes they can't help but have a little bit of pun. Is it cheesy? Of course it is. But it's also a gouda idea.

Need breakfast? No problem. They'll sell you everything you need in one package.

If breakfast is already taken care of, how about whipping up some guacamole? You can get everything you need to shove the green goodness in your face all the quicker.

And who knows where things could lead? Probably back for a second trip.