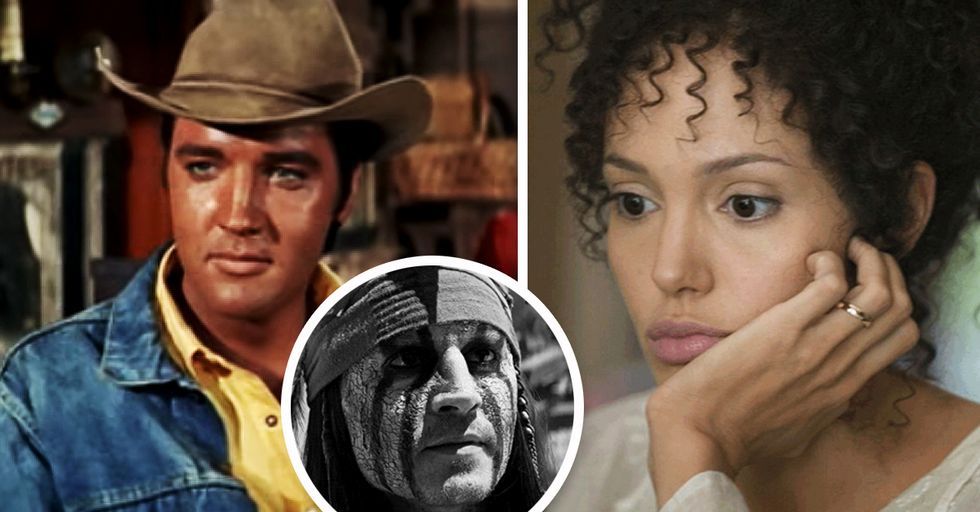 Hollywood has a very long history of whitewashing movies. In some notable cases, entire casts have been bronzed-up or outright put in blackface to portray races other than their own. It's so bad, lots of these movies have sparked backlashes or even full-out social movements.

Here are a few of the most egregious cases from the very earliest days of movie history to present day.

1. Birth of a Nation

Birth of a Nation is an obscenely racist movie. It portrays Klansmen as heroic figures protecting innocent white women against ravaging black rapists.
Wouldn't you know all the major black characters are in blackface? There they are, enacting every offensive black stereotype known to man. It's a Klansman's dream come to life... which would be why the KKK still uses the movie for recruitment purposes.

You know all those awful romance novels with an Arab sheik on the cover clasping a distressed Western woman for dear life? Turns out someone made then into a 1921 silent film which stars Rudolph Valentino as the titular sheik.
In the end, it turns out the sheik isn't really Arab, he's white and Spanish. This actually makes it worse when you consider that Hollywood was very leery of showing interracial romance back in the day.

3. The Thief of Baghdad

Boy, 1920's Hollywood had some love affair with the Middle East, and it reached its peak with this portmanteau of several Arabian Night's tales.
Douglas Fairbanks plays the titular thief in the greatest role of his career. There's only one problem though – he's white, and, as you will recall, Baghdad is in Iraq...

As if The Sheik wasn't bad enough, they did it twice. No, seriously, after the original 1921 movie, Rudolph Valentino came back in 1926 to reprise his role, and this time, he brought backup.
In the movie, there's a new character called Yasmin, an Arab dancer. Guess who it was played by? If you guessed Vilma Banky, a white Hungarian actress, you'd be correct.

The Jazz Singer focuses on a Jewish man who wants to be a Jazz singer, and puts on blackface so he can fulfill his dreams.
It's incredibly racist, but surprisingly, black audiences of the day loved white actor Al Jolson's portrayal because they thought it would pave the way for actual black actors on screen.

1940's Hollywood not only enjoyed liberal doses of blackface, it also indulged in yellowface from time to time.
A particularly egregious example of this featured Katherine Hepburn with prosthetic eyelids in the very questionably-named Dragon Seed. And yes, all the other major actors were in yellowface too.

We all loved Judy Garland in The Wizard of Oz, but did you know she starred in a very racially uncomfortable movie just one year before?
She portrays a young jazz singer named Judy Bellaire who becomes the star of a musical show as a blackface singer. Let that sink in.

Over the years, there's been a lot of controversy over Cleopatra's race. Was she mixed? Black? Macedonian Greek? If there's one thing we know, she certainly wasn't fully white, and neither were Egyptians in general.
So why, we ask you, was she portrayed by Elizabeth Taylor? You know, that Elizabeth Taylor notorious for her violet eyes?

The most famous Moor in literary history, the entire tale of Othello is very iffy if you look at it. So are both its early cinematic portrayals.
In 1952, it starred Orson Welles in "light bronzing," but that, apparently wasn't enough, so when it came back in 1965, it was Lawrence Olivier in full-on blackface.

One of the most egregious examples of whitewashing had hordes of white actors globbing on mounds and mounds of spray tan to portray characters in ancient Egypt, which, as you will recall, is in Africa.
As the Washington Post quips, "American Charlton Heston and Russian-born actor Yul Brynner, both white, played a Hebrew hero and Egyptian pharaoh, respectively, in the Biblical epic." Indeed.

After The Ten Commandments, Yul Brynner wasn't ready to give up his white-washing ways yet, because he hopped on another big budget movie that required a bit of spray tan and creative makeup.
In The King and I, he played King Mongkut of Siam. Siam is now called Thailand. Oh, and he played the character 4,625 on Broadway. Nice.

In one of the most notorious instances of whitewashing ever, Natalie Wood, the same actress from Splendor in the Grass played Maria Nunez, a Puerto Rican teenager.
There was one bright spot in the movie, however. Rita Moreno, an actual Puerto Rican actress, played Anita Palacio, Nunez's best friend.

If there's one character that encapsulates every Japanese stereotype ever, it would be Mickey Rooney as Mr. Yunioshi in Breakfast at Tiffany's.
Mr. Yunioshi has buckteeth, a pronounced accent, and a marked love of steam baths. He's also the literal definition of Japanese yellowface.

When you hear the name Alec Guinness, do you think the Middle East? This is a serious question.
Hollywood, apparently, thought so, because he was cast as Prince Faisal, an actual historical figure who later became king of Syria and Iraq.

The 1990's brought another wave of whitewashing offensiveness, most of it perpetuated by Rob Schneider, an egregious repeat offender.
In Big Daddy he plays a Middle Eastern delivery guy. Again, his last name is Schneider.

16. The Passion of the Christ

This might come as a horrifying shock to some people in Hollywood, but Jesus was Middle Eastern. So why, in the name of all tarnation, was he played by Jim Caviezel?
If that weren't enough the rest of the actors are mostly white, and the film is extremely violent in its portrayal of the last few hours of Jesus's life.

If you thought blackface wasn't alive and well in the 2000's just take a gander at Angelina Jolie's role as Mariane Pearl, the wife of Daniel Pearl, a journalist who was kidnapped when...
Jolie slathered on liberal and excessive amounts of bronzer and also had her hair tightly curled to portray Pearl, who is of Afro-Cuban descent.

19. I Now Pronounce You Chuck and Larry

Rob Schneider can literally not stop being racially offensive. It's almost like someone gave him a mandate to go out and whitewash everything.
In I Now Pronounce You Chuck and Larry, he stretches the bounds of good taste by appearing as an Asian minister. Nope.

Mike Myers is known for his ability to inhabit tons of different characters, but this time, he took it a bridge too far when he played the Indian Guru Pitka.
Thankfully, he didn't wear brownface, but he did sport an elaborately curled beard and an extremely iffy accent.

This movie is based on the true-life story of a team of Asian MIT students who fleeced Vegas via a card-counting scheme.
Sorry, did we say Asian? Because pretty much everyone in the movie was played by a white actor.

Any anime fan will tell you that the characters in Dragonball: Evolution are Japanese. Just read the names – Goku, Grandpa Gohan, Master Roshi. So why were they mostly played by white actors?
It's so bad, the film has a staggering 15 percent rating on Rotten Tomatoes. Now, we're not saying the whitewashing did this, but it had a large part to play.

23. Prince of Persia: The Sands of Time

How in the heck is Jake Gyllenhaal the Prince of freaking Persia? That was the question pretty much everyone wanted to know when they saw this horrifically whitewashed movie.
Audiences came expecting something that fit in with the original video game's Arabian Nights aesthetic. Instead they got Jake Gyllenhaal. Jake freaking Gyllenhaal.

This movie's whitewashing was so bad, it caused uproar and even led to the creation of a new term – racebending. Anime fans have loved Avatar: The Last Airbender television series for years, so they were worried when M. Night Shyamalan was attached to direct it.
When he miscast the three main characters as white, and then made all the villains Indian, fans created a petition to stop the racebending. M. Night's career has never been the same.

Johnny Depp made a huge production of maybe-sorta-kinda having Native American ancestry on his great-grandmother's side when he got cast in this film. He even got adopted by a Comanche tribe.
He was still wrong for playing the character Tonto, who was made famous by Canadian native actor Jay Silverheels.

"My name is Khan!!!" roars the villain, Khan Noonien Singh – no, sorry, John Harrison, in Star Trek Into Darkness. Even though they racebent him into a white guy that looks shockingly like Benedict Cumberbatch, the original Khan character is supposed to be of Indian descent.
Then again, the original Khan was played by Ricardo Montalbán, who, by the way, is a Mexican actor.

2014 was a calendar year for Hollywood whitewashing. It had not one, but two racebent movies out at once, both set in biblical times.
Exodus: Gods and Kings dealt with the story of Moses, who is played by Christian Bale in what amounts to brown-face, and in Noah the titular character is played by Russell Crowe. Russell freaking Crowe!

Here's one that never fails to be completely cringey. Aloha is set in Hawaii and features Emma Stone as Captain Allison Ng, a mixed-race character with a half-Chinese, half-Native Hawaiian father and a Swedish mother. Okay.

When the newest iteration of Peter Pan came out in 2015, everyone was excited to see which native actress would be chosen to play perennial favorite Tiger Lily. Did you expect football heiress Rooney Mara? No, we didn't either.

When you hear the phrase "gods of Egypt," what do you imagine? Certainly not a whole bunch of literal Europeans. Gerard Butler is Scottish, Nikolaj Coster-Waldau is Danish, and Élodie Yung is French. Definitely not Egyptians, which may be why the movie tanked.

Ghost in the Shell is the beloved Japanese anime that's spawned such notorious rip-offs and copycats as The Matrix franchise. It's set in future Japan and populated by Japanese characters.
Guess who they cast to play the lead? If you guessed Scarlett Johansson of Girl With the Pearl earring fame – a choice which ignited global furor – you'd be correct.

Hollywood literally doesn't know what to do with anime adaptations. Case in point, beloved anime Death Note, whose obviously Japanese protagonist, Light Yagami was turned into Light Turner for the Hollywood version. Okay.