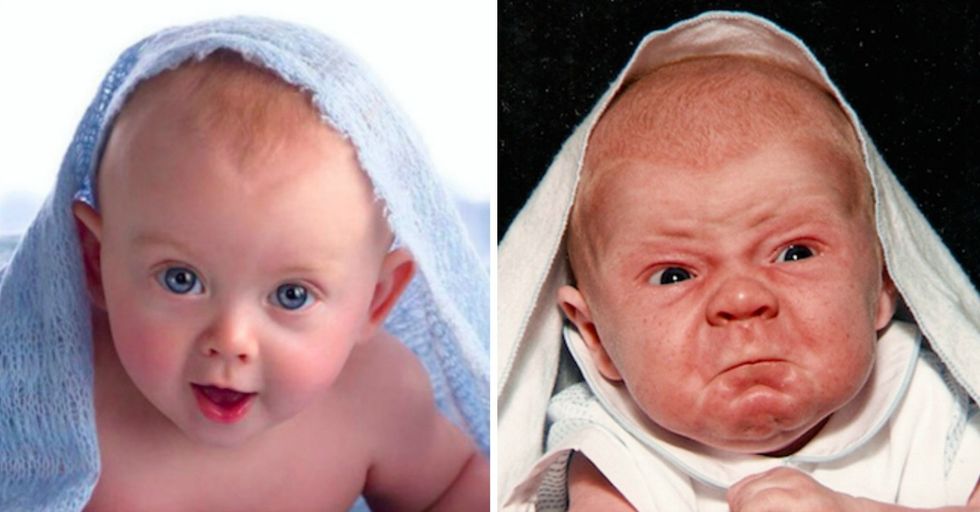 Pinterest is full of beautiful pictures, inspiration, and lies.

Well, not exactly "lies," but they do often make things look so much simpler than they end up being. Seeing that pinnable perfection makes it easy to forget the amount of hard work, luck, digital help goes into creating a perfect photograph.

It's only when you try to recreate them for yourself — with kids who couldn't care less what you want to do — do you realize that, well, it isn't quite as easy as it seems.

More like, "Oy!" Nobody is having any of that joy stuff you're talking about.

It's her party and she'll cry if she wants to. And she totally wants to.

The Baby In a Truck

He's like, "Really? Did you actually think this through?"

The Vase of Gum Balls

To be fair, who could be comfortable in a vase of gum balls? Just be sure to avoid the "chocolate" ones.

The Leaning Tower of Kids

The poor little guy on the top is simply holding on for dear life, while his big brother is sporting some pretty fancy draws.

Get used to it kid. That's how you'll feel every day as an adult.

The Baby In a Box

Who thinks, "Let's put our baby in a box with packing peanuts and take a picture?" Well, these people did, but it's a little bit creepy.

Sure, give them breakable bulbs and strings of electrical lights. What could possibly go wrong?

The Hands Under Chin

Or, you know, the fingers in the eyes. What baby can really pose like that? At least he tried.

I know! Let's stick our baby in a giant piece of fruit!

Here comes Peter Cottontail... ...and there he goes, down for the count.

He's so little he actually takes his naps hanging from the banana holding stand. Do not try this at home.

Awww, they look so peaceful. At least one of them does.

It's good to start a love of reading early and everything, but they might be a little young for comic books.

As long as I'm here, I might as well take a nap. After all, he sees you when you're sleeping.

In theory, it's a great way to repurpose your jeans. In reality, it looks like the world's worst wedgie.

I don't blame you for that look, kid. A cold, wet rind doesn't exactly scream "comfort."

This looks like the worst tug-of-war game ever. Nobody wins here, people.

"I don't know. Just put a giant kiss on her butt."

"Why did you stick me in this cage with air-filled rubber spheres that can explode and pop at any second?"

Give a kid a cupcake, and you really can't expect much more. You only turn one once!

Just casually pose with your peacock tutu, maybe glance back a little bit at the camera... Or just scream at the top of your lungs. Either/or.

The Baby In a Basket

"Hey. Yeah, you. This is what you do with your picnic basket?"

The poor kid looks like he rolled around in a patch of poison ivy. I would probably be crying, too.

Maybe he's just not into poetry and would like a different selection? Or he just wants nothing to do with pretending to care about books.

"You think I'm too young to remember this, but make no mistake. I know...and I will never forget."