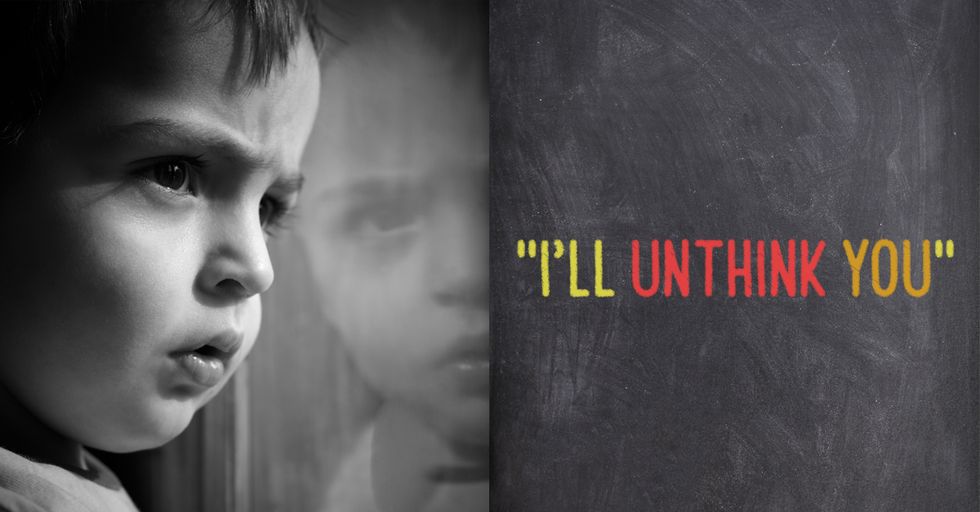 Kids say the darndest things, but sometimes they don't quite have the vocabulary to properly articulate exactly what they mean. They also lack a filter, which means when they get frustrated or upset, they sometimes create the most epic insults and burns that are one part cutting and an even bigger part hilarious.

The good people of Reddit — the ones who have recovered from those epic burns, anyway — were all too happy to provide some examples.

I'm thinking I would zip my lips at that point. Not only does it sound quite painful, but I wouldn't want to attract all the neighborhood squirrels. That would be the REAL torture and punishment for not shutting up.

So much for man's best friend, huh? Even the dog that eats crap doesn't want anything to do with you. If you're getting this sort of criticism from children, it's time to take a long look at your life choices. Something will have to change.

This poor guy just got roasted HARD. Just wandering around the swings, singing a little song, when suddenly out of nowhere a tiny human suddenly becomes Simon Cowell on American Idol. Maybe let the singing man sing, and you mind your business, you critical monster!

Now I want to know what joke was so unfunny that even an eight-year-old thought it was lame. All eight-year-old jokes are pretty bad, so this one might have been especially bad to elicit such a response. We'll never know now.

Somebody call 911. We have a burn victim here. Here's to hoping that the children's hospital features a Metaphorical Burn Ward. It might not be used often, but when it is, it's a lifesaver.

Actually, we all are. That kid's got straight-up sass, no two ways about it. We're all laughing now...except for maybe the aunt, who's wondering what she did to agitate such a cold-hearted kid. Maybe don't call her "fat" next time, auntie.

How do you even reply to that? Do you dismiss it, or do you offer up a defense of how your face doesn't look like a butt. You could also instruct her that SHE is the one who looks like a butt. I suppose a discussion on genetics would provide some sort of relief, but "I know you are but what am I?" might be a bit more effective.

This one is a bit tricky because the insult wasn't directed towards you, but rather someone who isn't there. Still, that's a savage thing to say about your primary caregiver, especially with such little context. Do you laugh or try to hold it in and not encourage them? Either way, be glad you're not her mom. Because she's apparently quite fat.

Nobody likes getting sick, except you might get time off of work, so there's that. The bigger takeaway here is that the kid would flat-out turn himself into a mindless parasite to spite you. That's cold. We better keep our eyes on this one.

Apparently they could tell just by looking at him that he wasn't all that bright. Not such a happy meal at that point, was it? Now we're left wondering why, exactly, the kid felt the urge to drop this criticism on a stranger. Was it the way he was dressed? Surely he had SOME brains.

Dear Santa, Forget the new phone, bottles of wine, and DVDs that I asked for. I need a gift card to Amazon to pick up some helpful reading materials. Also, a book on raising my self-esteem after a particularly brutal takedown would be a real treat. Yours in truth, Burn Victim

Wow, that is so oddly specific that you can tell they really thought this one through. Not only does it have the damage from the initial flames, but also from the hammer-beating. That's not a great way to stroll out to meet the world. Also, the kid who said this is deranged.

Did you just call me worse than the devil? Maybe they got confused and meant Santa. Nah, they went full hyperbole and called me worse than the historically worst being ever. Kids don't ever go for the subtle digs, do they?

Show Them the Door

Ouch. First they led up with a simple question and then threw us for a loop by pretty much telling us to go away. We'll be on the other side certainly not crying. Nope. We're doing just fine, thanks. This kid, barking out demands like this, must be used to getting what they want.

Yikes. This one is deep. Good luck coming back from that. This reads like the ultimate mind game from a sci-fi book. I would pay money to read The Unthinker during a day on a hammock.

That's what you get for not playing Minecraft with her. Have fun with your imaginary "friends," sister. The niece knows that you don't bail on plans to hang out with other people. Thus, she leveled the insult.

He kind of had it coming to him. I mean, "Stay short!" However, sorry about that bonus you probably won't be getting. Kids can cost a lot, and not always in directly traceable ways. Sometimes they just get you fired.

Hell hath no fury like that of a kid being sent to time out. Get out the air freshener, my friends. Does anyone know what a ruined life smells like? Two-week old Snapple and cold hot dogs? Cheetos?

On the plus side, he was able to hold back enough to not actually curse you out. On the other side, little dude was really ticked off at you. I suppose that describing a curse is slightly better behavior than laying it down. Not much, but a little bit.

No Soup for You!

Is bean soup really that bad? I mean, it's not exactly pizza, but it's also not the worst punishment one could dole out. There's a diet that involves bean soup and cabbage. Maybe you should take the hint.

I'm thinking the next time Anna runs into the teacher at the grocery store, there's going to be a little bit of explaining to do. Kids don't realize that insults between people don't belong in the public domain. They'll know better after a stern talking-to, that's for sure. Thanks, Jack.

His tastebuds are so precious that they cannot be sullied by the likes of the lasagna from a peasant. You know things have to be bad if there's a lasagna strike going on. Isn't it one of those foods that everyone could agree on? Apparently, its status has undergone a change.

I guess that makes it a little bit better. The door is the real problem here (and she didn't tell you to go on the other side of that door, like some other people we know). Then again, some kids just cry when they hear a curse word. Life's gonna be tough for those kids.

On the plus side, they were apparently paying attention in church. On the other hand, they think you're going to hell. I guess it's a push. Where does Jesus live, by the way? Heaven? Or does he have a nice spread somewhere out in wine country? Either way, it's too bad you're not heading that way anymore.

If you want an honest opinion on whether or not you're balding is noticeable, look no further than your own toddler. Little kids have no problem dispensing honesty in the roughest ways possible. They leave a wake of honest destruction in their paths.

Is there really a winner here? It's like the most depressing Choose Your Own Adventure ever. Either one you pick, you're left feeling like a heavy, dirty vehicle. You can always ask for more options.

It's Not Polite to Stare

He kind of set himself up for that one...Well-played, little dude. Well-played. It's always a little sweeter when the little one gets the last laugh. It's like the decks are stacked against them, but they still manage to come through in the clutch.

The candy critters aren't going to evacuate their bladders just anywhere. No, it's going to be in your hair. Gummy bear pee would actually be a pretty marketable candy. I could see gross little kids with sweet tooths going for those.

You won't let her stand on her chair while waiting for her pancakes? Haters gonna hate. Meanwhile, this girl's learning how to clap back at a high school level at the age of just three years old. Let's all take a minute and fear for her future.