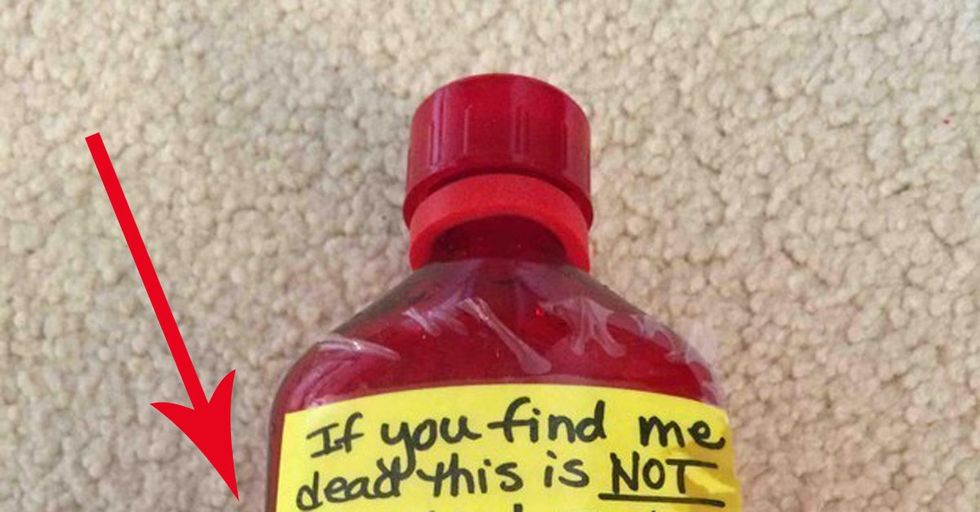 35 of the Most Mom Things That Have Ever Happened

Dads get a lot of attention for their corny dad jokes and sense of humor, but moms can give them a pretty good run for their money...

She knows a good picture when she takes it. Here kitty, kitty...

Not to mention the perfect pun.

I love ewe. Don't be sheepish about it.

She's loving it. Dinner is served!

Who wears the pants in the family?

No. But maybe he did "lose" a pair of pants.

Expect a follow-up email. And then a text about the email.

The key to a good joke? Timing.

Ask and you shall receive!

Maybe next time be more specific. Then again, chocolate is a pretty good gift.

Get ready for therapy.

You know what they say...

Invention — or improvisation — is the mother of necessity. Bust out the power tools!

Actually, she probably does know what that means. Mom has a randy side.

Clean. Single. Looking for a mate. What more could ask for?

And if you have to be left somewhere, Walmart probably wouldn't be your first choice. Mom owes you one.

What do you do? You make the obvious pun.

It's not a competition.

You will eat it and you will like it. It's better than the alternative.

She's armed and ready for battle. Catch her if you can!

She's up on technology.

This mom can relate.

At least she left him alternative methods. But still...ewww.

This could totally catch on!

It makes just about as much sense as all the other acronyms out there. SMH, TBH but LOL.

You won't cry cutting onions if you wear swim goggles. You might look funny, but you won't cry.

One must be clear with their instructions.

At least it's a delicious decapitation. They probably won't feel a thing.

Be afraid. Be very, very afraid...

Of what? Probably of having to go to a meeting.

Talk about light beer. It really just goes right through you.

They don't even take the day off for holidays.

And it's the real Cinco de Mayo. Not of that Miracle Whip stuff.

She's always there with good advice.

Send in the clowns! Actually, don't. Clowns are kind of creepy.

She has a few demands.

via: What the Flicka

Now maybe if you get that room clean, you'll find a dollar under that pillow. That's one way to get things done around there.

It has its perks.

That would give a whole new meaning to chocolate chip cookies. Glad that confusion is cleared up.

An appetite for affection?

One can not live on love alone, mom. Could you throw in a granola bar?

It's called "mom multitasking." Go for the high score!

The more you know...

I'm sure they appreciated that. Or at least they will when they have their own kids.

If you want to play, you have to pay! Rules are rules, my friends.