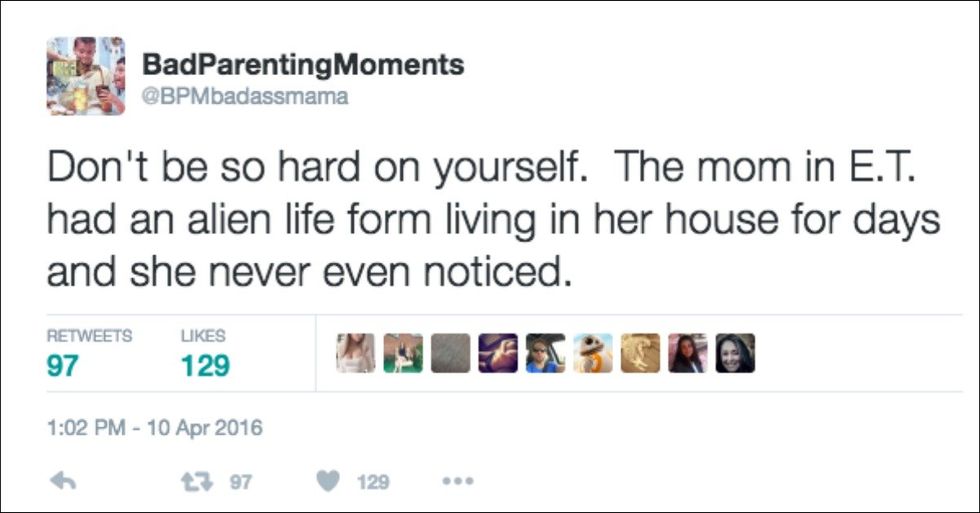 37 of the Funniest Things Moms Ever Said On Twitter

Motherhood is no joke.

In order to survive it, you do need to have a good sense of humor. And these ladies here? They don't mess around or sugarcoat things. They're hilariously honest about being a mom, and thank goodness, they tweet it out.

Too Cool for School

Aren't there any more after-school activities you're interested in? Any more clubs that you could join?

That's okay. They build up an immunity that way.

You can't argue with that logic. In fact, it's pretty on pointe...pun completely intended.

And that Mama and Papa Bear sleep in separate beds? Maybe Baby Bear was the only thing keeping that family together...

And about five more loads of laundry to do. But hey! At least the room is clean!

What direction did it come from? Is anyone crying yet? No, okay, then give me 10 more minutes.

This is a sequel to the hits: You're Over 30 So Why Aren't You Married Yet and Everything About Your Wedding Wasn't the Way That I Would Have Done It.

See? Didn't I tell you that would happen? Doesn't anyone listen around here?

It's all about motivation, and thanks to that bottle of Merlot, she has successfully completed a quadruple back handspring, triple tuck roundoff, scoring a perfect 10 from the Russian judge. Multitasking!

They've gone from I Spy to iPads, blissfully ignorant of the days when seemingly harmless objects of nature could be used as some sort of weapon.

Maybe he's just biding his time... You don't want to peak too fast.

But you have to hear about the simply amazing piece of grass they blew on to make a whistle...again and again and again. With full demonstration, of course.

Let's be honest. That's a bit more practical than what everyone else probably wrote down. It's five o'clock somewhere!

To them, that probably feels like the same thing. Then again, at 2 a.m. who can be sure?

A Work of Art

Great! Another picture to put on the fridge! Better make room for that one by putting the others in that great recycle bin up in the sky...

The competition wasn't very steep for the designation, but yes, cradles falling out of trees doesn't exactly lull anyone into a peaceful night of rest.

Especially when they don't say anything... They just stand there kind of breathing and looking at you. Not so cute.

You're worried enough to care, but really can't be bothered to watch their every move... That just sounds like a whole lot of work.

And just think of Little Red Riding Hood. They let their daughter hang out with a freaking wolf. You're doing fine.

A Stab At It

And he has to do it by himself. No help from you, mom and dad.

Next thing you know he'll be handing out Werther's Originals and calling it "The Facebook." They really grow up so fast.

It's not that they don't want to eat the apple. It's that they just want to take the apple for a field trip to and from school every day instead to give it a sense of adventure.

No, it's not a rhetorical question. But it could be multiple choice.

Step 1: Remove shirt. Step 2: Get mom a beer. Step 3: Instantly lose interest in the LEGO project and move on to something else.

Not to mention wet wipes and possibly wrapped straws too, just in case. You can never be too prepared, and hey, they're free!

Then can I please get a complimentary bottle of wine to go with this bag of pretzels? Is that too much to ask?

As an adult you are afforded certain pleasures, like doing all the things you were told that you couldn't do as a kid. Like eating ice cream on the couch directly from the carton.

Go to jail, go directly to jail. Do not pass Go, do not collect $200. However, you do collect some quiet time which is pretty much priceless.

Like father, like son. None of them quiet figure out the mystery puzzle of how to actually fit all the dishes in there.

It's important that they learn these things early on. You have to keep the faith.

"Will someone magically show up and help me clean?" *Magic 8 Ball sighs and then laughs uncontrollably*

The first time is not a suggestion or starting point for negotiations. Don't make her bust out the Bat Signal.

What's in a name? A lot if you want to keep that pie all to yourself.