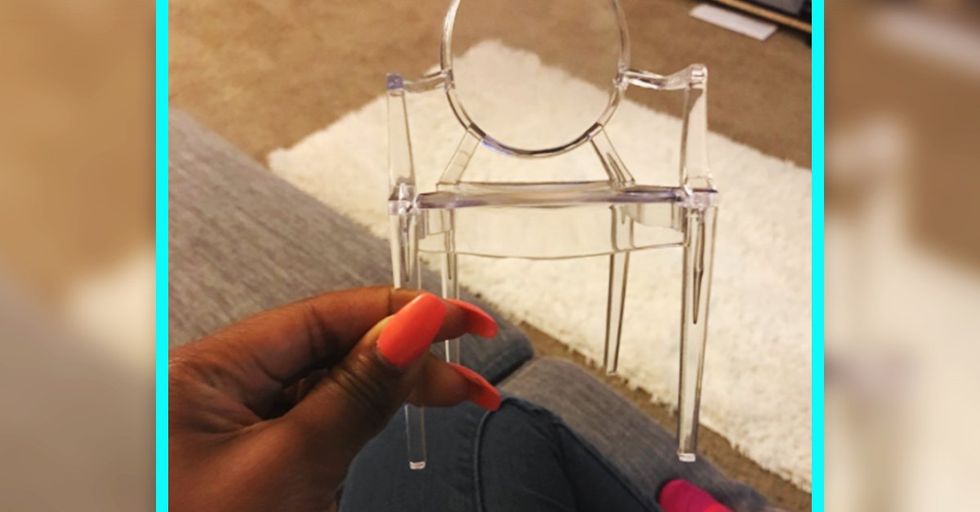 In many respects, the Internet is one of the greatest things that have happened to humanity in centuries.

You can stay in touch with your friends from around the world and talk to people you would never normally have crossed paths with.

And, of course, there's Internet shopping.

These days, you can order pretty much anything from the comfort of your very own home. You don't even have to put on pants! However, this power comes with its share of risks. That's why you should always read the fine print before you buy anything online. Otherwise, you may end up disappointed like these people:

Talk about a summer let down

Either this person has gargantuan feet, or the kiddie pool they ordered was not quite what they were expecting. I'm gonna go with the second one.

I would be sad at first and then immediately happy...

One of the best ways to get extra info before purchasing a product online is by reading the reviews. Thanks to this one, I will not buy purchasing the top for myself. I will be buying it for my cat, though.

This one makes me frustrated​

Apparently, this listing was only for the yarn to make the blanket shown in the upper right side of the picture. Still, though. That's not even close.

Actually frightening...who's kid is this?

This one doesn't mind me as much!

As anyone who's ever tried to take a selfie can tell you, perspective is everything. Amazon really got sneaky with the pictures of this horrifying teddy bear.

Before booking a stay online at a place with a "private balcony," be warned that you may actually end up with something like this. On the bright side, you have a stunning view of the neighbor's house.

You really can't blame the customer on this one; they clearly received something that was nothing like the listing. Unless that little girl is a really little girl.

A little bit misleading I'd say

Here's another AirBnB listing. This one promised a view of the nearby church. They're not technically incorrect...

This one is too funny to be mad at...

I think this is my favorite thing that ever happened on the Internet. I'm sorry the mask didn't work out, but at least you could bring joy to those of us who are seeing these pictures.

This is clearly not going to work as workout wear. On the other hand, your outfit for your next formal gathering is settled!

This outfit was advertised EVERYWHERE online...

Oof. This one stings. I'm guessing she didn't order the "cropped and poorly sewn" version. But that's exactly what she got.

I love when people put the clothes on anyway, even though they clearly realize that what they've received is not even close to what they ordered. The product is horrible, but it still has some value in being able to provide a laugh for everyone.

She did order a "puffer "jacket...

Oh, sorry, did you not want a coat that looks like it's actively trying to swallow you? My bad.

​A little less cute and a little more scary

So different! They need a refund...

If I ever receive a stuffed animal like this in the mail, alpaca it right up and ship it back. Immediately.

I mean, sure. I can sort of see the resemblance. At least you can look at this total failure through rose-colored glasses, though.

This one takes the cake!

If you ever see a price online that's too good to be true, it probably is. In most cases, you're either going to end up with a shoddily made product, or a product made specifically for a dollhouse.

Can this even be called a ring?

Who needs rings to go around your fingers when you can just balance them daintily on the tips of your fingers instead? It's the hot new thing.

I really hope this person got their money back. $750?! Know anyone who suffered from a poor online purchase? Share this with them to make them feel better! Looking for more online shopping fails? Keep reading...

When it's not what it seems...

Hey, as long as it has the right logo on the outside, does it really matter what's on the inside? Yes. Yes, it does.

These flowers are terrifying!

On the bright side, your cat has a new little accessory!

Unfortunately, the backpack you ordered to use as a carry-on bag probably isn't going to work. On the bright side, though, Shadow loves it!

How can this be comfortable?

At least they included the actual seat part of it. That's pretty important when it comes to chairs, ya know? This next one is super embarrassing...

There's a lot I could say about this one. But I think the emoji pretty much expresses it all.

I'd also probably avoid purchasing cast iron skillets online. Unless I'm looking for something to fry a quail egg in!

Now that's what I call a graphic tee...

This shirt is just one step above buying a plain black T-shirt and whispering the name "Chance the Rapper" next to it. Quite the fail.

Maybe you can give it to your cat?

So cute, yet so impractical...

The second picture makes this one of my favorite fails yet. At least she can still smile about the whole debacle. And props to her for assembling it anyway!

Fit for a game of operation

A lot of these fails have been people accidentally ordering the miniature version of something. This is quite the opposite.

I see banana bread in your future...

Talk about a bunch of bananas, amiright?! Something tells me this person has a lot of banana bread in their future.

A whole new meaning to the word "laptop"

This desk is perfect for those times when you only have "a little" bit of work to do. And if you're looking for some little shoes to wear, this next person has you covered...

Yep, you're definitely out of luck there. But if you know any babies, they're about to look pretty darn awesome.

Maybe the "Bleu Jays" are just the fancier version of the Blue Jays. Like the cheese. Or something.

At least you can use it as a mouse pad...

If you ask me, that room could still really pull the room together. In a Borrower's house.

Fit for a Barbie doll...

Well, these boots actually weren't made for walking. Better luck next time.

These chairs are perfect for when you can't afford to take time off work but still want to take a little vacation. Don't forget the sunscreen.