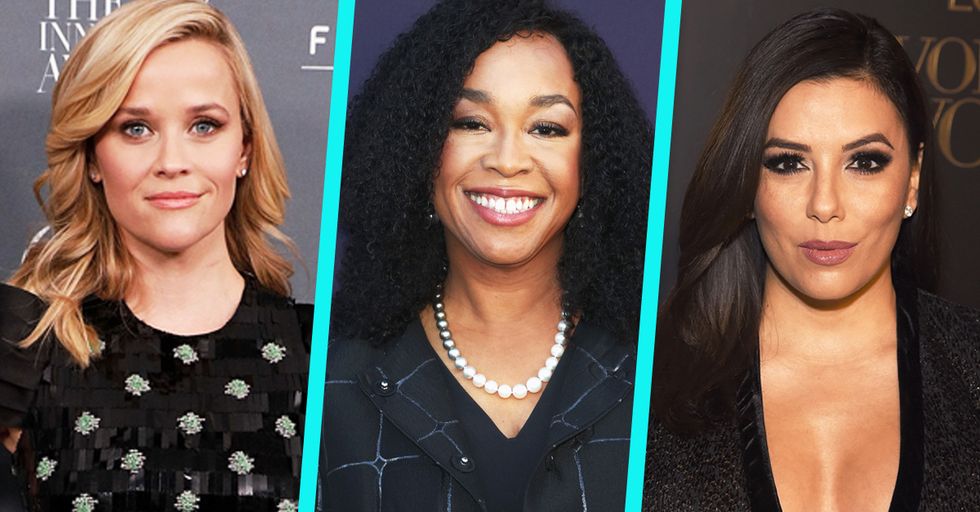 Time's Up! This is the Bold New Initiative Hollywood Stars Have Started to Combat Sexual Assault

2017 was the year of exposing sexual assault.

After producer Harvey Weinstein was found to have harassed, assaulted or raped over 80 women, the floodgates burst open. Notable men across the entertainment industry and beyond were accused of sexual harassment or assault with many accusations dating back decades. It soon became clear that — when woman after woman after woman came forward — it wasn't just a coincidence, it was a systematic pattern.

One thing we learned from the deluge of accusations was that the men who assaulted did not operate in a vacuum. Often, as was the case of Weinstein, Russell Simmons and Matt Lauer, they had a host of others aiding them in their predations or the subsequent coverup.
Weinstein had Fabrizio Lombardo, an Italian "producer" who facilitated his meetings with unwitting actresses. He also had Dylan Howard, an editor at the National Enquirer (who has been accused of sexual harassment himself) who commissioned journalistic hit pieces on the actresses that dared speak out.
Oh, and he also hired ex-Mossad agents to follow, steal information and gaslight actresses he thought would speak out. That's right — the man used actual spies.
Weinstein wasn't the only predator who acted like a real-life Bond villain. Others like Russell Simmons and Matt Lauer were just as sinister. Simmons relied on director (and accused sexual abuser) Brett Ratner to source young models – some as young as 17 – for his predations. He used his reputation as a zen, yogi-type to make himself seem safe even as he was molesting and raping young women. One woman describes not "recognizing" him as the man she's known for years when he raped her. Lauer, meanwhile, had a button under his desk to lock unsuspecting women in his office.

In response to these allegations — many of which were accompanied by testimony after testimony until the truth of their nature became undeniable— actresses in Hollywood were called upon to speak out. Notwithstanding the gross sexism evident in these demands (women, the primary victims of these sexual assaults being called upon to create a solution, instead of the men who did the assaulting) people felt that their response of wearing black to awards shows was simply not enough. But as it turns out, it was never just black dresses.
When the sexual assault allegations in Hollywood first emerged, Alianza Nacional de Campesinas (the National Farmworker Women's Alliance) sent a powerful letter of solidarity to women in Hollywood. It began:

Dear Sisters, We write on behalf of the approximately 700,000 women who work in the agricultural fields and packing sheds across the United States. For the past several weeks we have watched and listened with sadness as we have learned of the actors, models and other individuals who have come forward to speak out about the gender based violence they’ve experienced at the hands of bosses, coworkers and other powerful people in the entertainment industry. We wish that we could say we’re shocked to learn that this is such a pervasive problem in your industry. Sadly, we’re not surprised because it’s a reality we know far too well.

Now, the women of Hollywood are finally responding.
This week, 300 women in Hollywood — including heavyweights such as writer Shonda Rhimes and actresses Reese Witherspoon, America Ferrara, Emma Stone and Eva Longoria — took out a full page ad in the New York Times announcing "Time's Up," an initiative to combat sexual harassment in the workplace across several different industries, especially those with low power such as farmworkers, servers, janitors, etc.

Time's Up, which does not have a leader and is instead made up of different initiatives, seeks to combat structural sexual harassment in many ways including a legal defense fund to subsidize legal fees for "women and men who have experienced sexual harassment, assault, or abuse in the workplace."
$13 million of the targeted $15 million has already been funded by major donors like Reese Witherspoon, Shonda Rhimes, Oprah Winfrey, Jennifer Aniston, Meryl Streep, Steven Spielberg and Kate Capshaw.

According to CNN, major Hollywood agencies like ICM Partners, William Morris Endeavor, United Talent Agency and Creative Artists Agency have each donated $1 million or more. Furthermore, a GoFundMe page has been set up for contributions. But that's not all it's doing...
The organization is pushing for gender parity in the upper echelons of leadership across Hollywood agencies, studios, and organizations. Shonda Rhimes has already gotten her agency ICM to pledge 50-50 gender parity by 2020.

A group of more than 1,000 women in entertainment, including Reese Witherspoon, Shonda Rhimes and Meryl Streep, hav… https://t.co/sr1XdaQ2Ec
— CNN International (@CNN International)1514913293.0

"It's not enough to have 50 percent [female] employees," ICM managing director Chris Silbermann told The Hollywood Reporter. "Women have to be equally represented in true positions of leadership and influence throughout the company." Truer words have never been spoken.

If there's anything we've learned from the continuing scandals, it's this: sexual harassment and assault are crimes of power that drive women out of industries. And until women achieve parity — true representation and pay in the most powerful levels of their industries — these crimes will continue.
And the forerunners of Time's Up are sure it is possible to end endemic sexual harassment. As Shonda Rhimes said to the NY Times, "We just reached this conclusion in our heads that, damn it, everything is possible. Why shouldn't it be?"