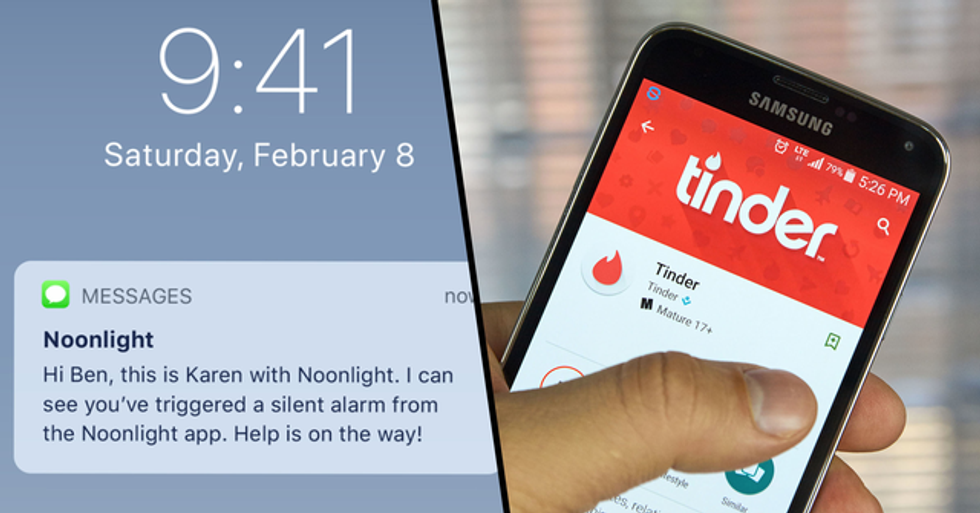 The dating and relationship app, Tinder, has put its foot down when it comes to unsafe dating by partnering with a security company that will provide users with their own "panic button" if they were ever to feel unsafe or in danger while out on a date.

Keep scrolling to read more about the revolutionary new features, and what they could mean for the future of online dating...

We're living in the digital era of dating.

Long gone are the days where you meet your soul mate out in a bar or in your local coffee shop... These days, true love is found online.

Finding a partner is now at the tip of your fingers...

Literally. There are endless dating websites and apps out there that line-up and display potential love interests from your local area.

You can browse through your prospective partners...

Just as casually as you would while browsing for groceries at the supermarket.

All you need to do is select your best photograph...

And boom! You've met someone, all at the touch of a button (or the swipe of a screen, in some instances).

A staggering number of relationships are started online these days...

And, as of 2017, forty percent of Americans admitted to meeting their partner or spouse online.

So, obviously, the online method of finding love is doing something right.

But, with its many pros, comes its many cons.

Meeting up with strangers off the internet has always carried with it a negative stigma, and it isn't difficult to see why.

It can be incredibly dangerous.

And many of us can't help but feel uneasy when meeting with a total stranger for the first time.

There are many things to be taken into consideration.

Will they look anything like their picture? What if they lied on their profile? Will they be a different person entirely? The list is endless.

"Catfishing" has become a huge risk in the last couple of years.

The term "catfishing" is typically defined as "the phenomenon of internet predators that fabricate online identities and entire social circles to trick people into emotional or romantic relationships."

More and more people are finding themselves being duped online...

A staggering seventy-one percent of people, to be precise. And this makes the prospect of meeting up with a match even more threatening than ever before.

Predators have been known to use these dating apps as a means of grooming unsuspecting people...

And, upon meeting, their victims can find themselves in some pretty dangerous scenarios.

More often than not, these risks turn out to be unfounded...

But there are some instances of people genuinely being thrown into unsafe situations on their dates.

And this begs the question...

How does someone get themselves out of these kinds of perilous situations?

Well, one major dating app may have the answer.

The popular dating service, Tinder, is set to unveil a new range of features that will provide extra security for its users while out on dates.

Tinder is one of the most popular dating apps in the world.

The unique dating app matches users based on their geographical locations and works through the simple, yet slightly shallow premise of allowing users to swipe right to "like" or left to "pass".

And it is estimated that, in the last 7 years, over fifty million people have signed up to and used the service at some point in their lives.

But, with such little information provided about its users, Tinder profiles can very easily be made up and used for more sinister purposes.

Well now, Tinder are putting their foot down.

Tinder's parent company, Match Group, announced on Thursday that it is partnering up Noonlight, a safety app that tracks people's locations and sends information to local emergency services when an alarm on the app is triggered.

The feature will be rolled out on January 28th...

And users will be able to input information about their dates, including when and where they are going, and with whom.

They will also be able to share their exact locations...

And the app will be able to track them from there.

So, if a user is to press the panic button...

A certified dispatcher will be alerted, who will then notify local authorities like the police.

Tinder users can opt to have the Noonlight badge displayed on their profile...

So their retrospective dates can know that they are signed up to the safety service. "It serves as a deterrent if people feel comfortable putting it on their profiles," a Tinder spokesperson told BuzzFeed News.

And users needn't worry about sharing their location with the app...

As their data will only be shared with Noonlight. "Noonlight does not share or sell any data, and we only use data to get you help in the event of an emergency," Addy Bhasin, a Noonlight spokesperson explained. "So when you go on your date you can turn it on, and when your date ends you can turn it off."

Is this a new era for online dating?

Online dating has long been problematic, with many people emerging from their dates with complete horror stories. Keep scrolling to hear what some people hate the most about dating over the internet, some are hilarious, and some are downright creepy...