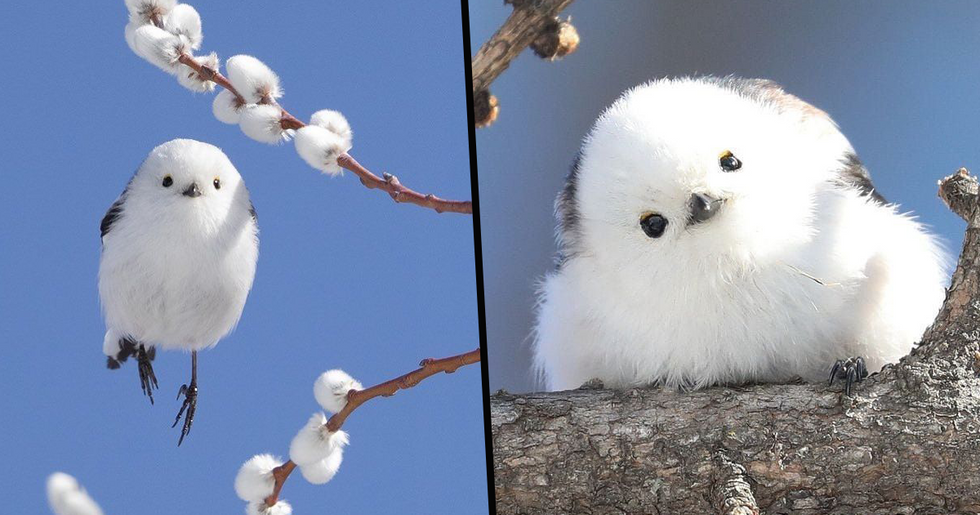 Over in Japan, everyone is obsessed with a species of bird that look like little flying cotton balls. Now, news has reached the internet and we can't get enough...

Keep scrolling for all the pictures as well as the incredible artwork of these special birds...

The world is full of incredible species...

Many of which we don't even know about...

From big cats to marine life...

But there's one that can sometimes get overlooked...

There are many rare and beautiful species of birds out there...

That sometimes we forget to appreciate just how interesting they are.

Take the Strawberry Finch, for example.

The Red Avadavat goes by its fruity nickname, because of it's bright red feathers.

But I bet you didn't know that only the males are actually red?

The females are stuck with being a mundane brown color.

Another classic is the Bearded Reedling.

These magnificent creatures are known for their agility and their soft appearances.

And the latest to take off may be one of the cutest we’ve seen.

Well, many think they look like flying cotton balls.

Introducing to you, the Long-Tailed Tit ...

Yes, you can laugh if you want to.

These adorable fluff balls are quite common in Europe and Asia.

The long-tailed part of their name refers to the length of their tail in relation to their tiny bodies.

They are pretty small but very adorable...

An adult only grows to be about thirteen-fifteen cm long, and that's including the tail, which counts for as much as half the entire length.

However, the specific group of long-tailed tits found in Hokkaido are on another level of cuteness...

Hokkaido is the second largest island in Japan and is home to 6 national parks and seventeen quasi-national and prefectural parks.

Therefore, it's become famous for its wildlife diversity.

And many species can only be found in that area.

While most long-tailed tits have more brown in their feathers...

The ones in Hokkaido have pure white faces meaning they could be mistaken for a flying cotton ball.

Just look at how fluffy they are!

They have even earnt their own name in Japan.

"The shima-enaga bird," which translates to "long-tailed island bird."

They have stolen all of our hearts.

They have proven extremely popular among Japenese folk.

So much so, that there's tons of merchandise and incredible art out there...

Check this amazing piece out...

I know what you're thinking, but it's just a toy! Very realistic though.

There are even desserts modelled after them!

Imagine being this popular? Can't relate.

Do you want one too?

Because I really want to adopt one of my own! If you think this is wholesome, keep scrolling to read more about Strawberry Finches.