These Are the Titles You Won't See on Disney+ | 22 Words 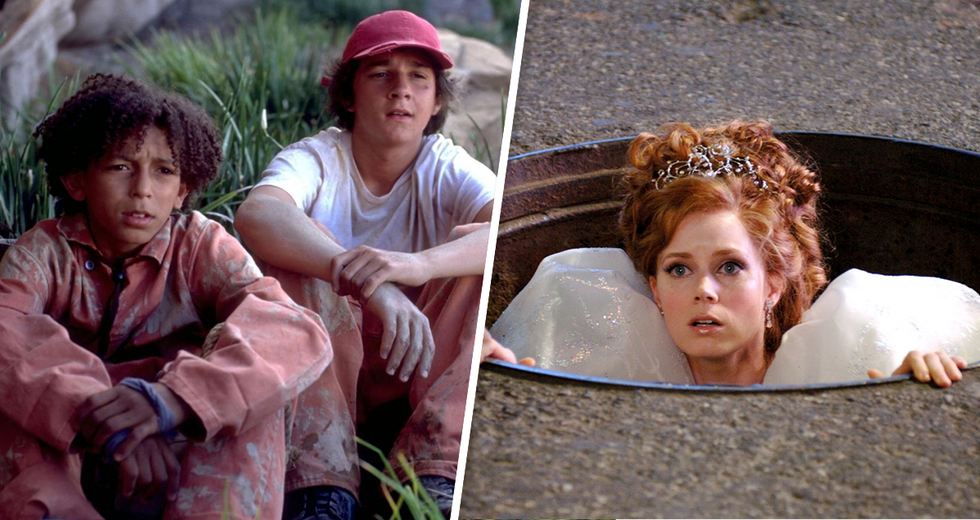 These Are the Titles You Won't See on Disney+

When Disney+ launched this month, all of us '90s kids signed up for a free trial and dove deep into the nostalgic movies and TV shows that defined our childhoods. There was so much there — The animated classics! Pixar! National Geographic (which is probably exciting for some people, I suppose)! Even a new Star Wars series!

And yet, even as we sit on our couches, scrolling through menus looking for something to watch, we can't help but be surprised by some of the omissions. There are some movies and TV shows from Disney's past that we thought were absolute lay-ups; the kinds of titles that, when we first heard about Disney+, felt were inevitable inclusions.

Here are some of the movies and TV shows you won't find on Disney+. Don't waste your time scrolling and searching for these nostalgic favorites (or weird historical oddities you'd want to see included if this were going to be a true completionist's Disney catalog).

Skipping Enchanted is truly an oversight on Disney's part — this live-action movie about the canonical Disney princess entering the real world is a celebration (and deconstruction) of all the Disney princess movies that came before.

Since Disney's acquired marvel, you'd think they'd know the value of superhero stories. And yet, this movie about the children of superheroes going to a superhero high school to learn to be superheroes isn't on Disney+. Superheroes.

You can kind of see why this one would be skipped. John Carter, a movie about a man who goes to Mars and fights monsters, is one of the biggest flops in movie history. Not only that, but it derailed the career of Taylor Kitsch, who played Tim Riggins on Friday Night Lights and is therefore one of our national treasurers. He should have been protected.

Here's the weird thing — Nicolas Cage's first Declaration of Independence-stealing romp is not on Disney+, but its sequel, National Treasure: Book of Secrets is. You're telling me viewers are supposed to just understand a movie that opens with its characters having already stolen the Deceleration of Independence?

Sonny With a Chance

This is the show that launched the career of Demi Lovato. It's important this be catalogued, lest history lose an important piece of pop culture. (I mean, she did write "NASA," the best song of our generation.)

Shia LaBeouf's first starring role, Even Stevens made the Disney+ cut, but Holes, based on a beloved novel, did not. Shia's probably out there right now, lobbying for Disney to upload the movie, perhaps with some kind of weird art project.

Tarzan is one of many movies caught in the web of digital streaming rights. It's currently on Netflix, but once whatever contract Disney has with its now-streaming rival is up, Tarzan is sure to show up on Disney+.

Oh no, this is one of those sad ones, isn't it? I remember kids reading this book in junior high and admitting it made them cry. Maybe Disney hasn't put up its film adaptation because it's just too sad?

When I signed up for Disney+, I didn't necessarily go looking for this weird old Disney cartoon that I kind of remember from my childhood, but if it were included, I'll be damned if I wouldn't have started up an episode.

There are maybe four movies that have made me cry more than Pixar's Coco. It's another movie that's currently on Netflix, so log in over there if you're looking for a visually beautiful and hilarious way to process any lingering grief you may be carrying for a lost loved one.

How is Homeward Bound not on Disney+? It was one of the first movies to make people realize that cute animals had feelings to, and is widely credited as the reasons we don't eat cats or dogs.

Bear in the Big Blue House

I was certainly too old to get into Bear in the Big Blue House, as it's a show for children, but that .gif there sure makes it look like the bear's a total party animal. There are not enough party animals on Disney+.

Remember when I said there were maybe four movies that have made me cry as much as Coco? well, Air Bud is one of them. As a child, I was often told that my dog could not play basketball, and that hurt.

Here we begin wading into the waters of missing Marvel movies, where each omitted film is a stranger case than the last. First, Spider-Man: Homecoming, the first MCU film to feature Tom Holland's Spider-Man. Since this movie was a joint deal between Marvel and Sony, you can see why there might be some hang-ups to getting it on Disney+.

The same can be said for the second Tom Holland Spider-Man solo movie, which just came out this last summer. I know Sony just came through for us in getting Spider-Man back into the MCU, but is it too much to ask to get the movie online and in the same place as the rest of the Marvel movies?

Have you wondered why there hasn't been a second Marvel-produced Hulk movie? That's because the character's rights are shared between Marvel and Universal. While Marvel is free to use Hulk in any of its movies, he can't be a movie's star without Marvel having to give over tons of dough to Universal. So while this is not only a Spider-Man-like situation, with two studios trying to work out the details, The Incredible Hulk also has Edward Norton in his only appearance as Hulk. I can understand the decision to make Disney+ a Mark Ruffalo Hulk-only zone.

But then why isn't Ragnarok — objectively the best Thor movie thanks in no small part to the Mark Ruffalo Hulk's appearance — on Disney+? Does Disney just hate Hulk? Too much smash-y smash for their family-friendly streaming service? (Parents notoriously hate movies that portray smash-y smashing in a positive light.)

Black Panther is another movie that's on Netflix and therefore can't come to Disney+ until its deal there is done, but man, it sucks that one of Marvel's absolute best couldn't be there for Disney+'s launch.

Ant-Man and The Wasp

Fox's R-rated X-Men spin-off comedies Deadpool and Deadpool 2 won't ever be seen on Disney+ because the Mouse House wants to keep the service family-friendly. But these movies are so fun, it almost makes me wish there was a Disney+ After Dark, where they could put not only the Deadpool movies, but the super-weird-and-way-too-sexual Howard the Duck movie.

All the X-Men movies

It's probably not worth it to put the X-Men movies on Disney+ — not only will it be confusing as Marvel begins integrating mutants into the Marvel Cinematic Universe, most of the X-Men movies are, well, very very bad.

It's very strange that The Proud Family isn't on Disney+ at launch when there are so many rumors that Disney is getting ready to reboot the series on... Disney+.

Toy Story 4 only came out this summer, so maybe it'll be one of the first big post-launch "event" drops on Disney+. It's much more enticing to subscribe to Disney+ for a month than to buy Toy Story 4 on Blu-Ray.

Not gonna lie, this was the first movie I went looking for on Disney+. I think The Last Jedi is the best Star Wars movie, full stop. Once its done with its Netflix exclusivity, I'm going to watch it again and revel in its deeply up-its-own-ass story about the importance of stories and probably cry again.

I get that Disney had to make a lot of deals with Netflix, but Solo came out just a little while ago, and they definitely knew they were launching Disney+. What I'm saying is, I want to cancel Netflix and just have Disney+, and Disney's lack of foresight in terms of ending its exclusivity deals before Disney+ launched is making that very difficult!

All those live-action Disney reboots? Nowhere to be found on Disney+! Maybe they're waiting for all of them to come out on Blu-Ray so they can drop them all on the same day and make waves online.

A Wrinkle in Time

I just looked into some possible reasons why A Wrinkle In Time might now be on Disney+, and it sounds like it's another John Carter-type situation — this movie was an enormous bomb. But Disney+ should be a place where Disney history is collected, successful or not! I hope they get over themselves and get A Wrinkle In Time online soon.

Another movie probably waiting to have its run on Blu-Ray before it goes live on Disney+, Mary Poppins Returns feels like a lock for the service sometime next year.

After I was disappointed o see Star Wars: The Last Jedi wasn't on Disney+, the next movie I searched for was The Incredibles 2. I've seen the original The Incredibles more than maybe any movie, and had only seen Incredibles 2 the one time in theaters. Bring this to your service, Disney+! I want to see it again!

Cory in the House

While That's So Raven made it onto Disney+, its spin-off, Cory in the House is absent. Maybe that's because the show's premise — that there was a precocious Disney kid running around in the White House — is much more disturbing today than it was in 2008?

This Disney musical fairy tale mash-up is a movie I want to rewatch on Disney+, as I only saw it once while I was on a date with a girl I'd had a crush on for forever and was too nervous about that whole situation to have paid attention to the movie at all.

Angels in the Outfield

Song of the South

Song of the South is... oof. Hard times. It is totally understandable why Disney decided to keep its most racist movie off its streaming site.

Another movie that might simply be too sad to show children anymore, Up is currently not on Disney+. A supposedly unrelated film called An Old Balloon Man Takes a Trip In His Balloon House But His Wife Doesn't Die, Nope Nope Nope that is exactly 10 minutes shorter than Up is set to be released soon.

My Date With The President's Daughter

If I would've seen this bizarre 1998 Disney Channel Original Movie on Disney+, I would've damn sure hit play, if only to listen to the iconic theme song I heard thousands of times in its commercials on the Disney Channel. (They just sing "My date/ with the president's daughter" over and over again. It is very funny and weird.)

The Simpsons (in a watchable aspect ratio)

Look, we all know having access to the entire Simpsons library is a huge selling point for Disney+, but these jerks cropped the show to make it fit on widescreen and it just looks awful. Disney, please fix this immediately.

Lost is my favorite show of all time — it's the show that made me want to be a writer; nothing's ever topping that — but for some reason, it's not on Disney+. I know the service is trying to be family-friendly, and there are some rough moments on Lost, but nothing has ever brought me and my family closer together than talking about what The Island's deal was and why it had polar bears and what Charles Widmore was up to.