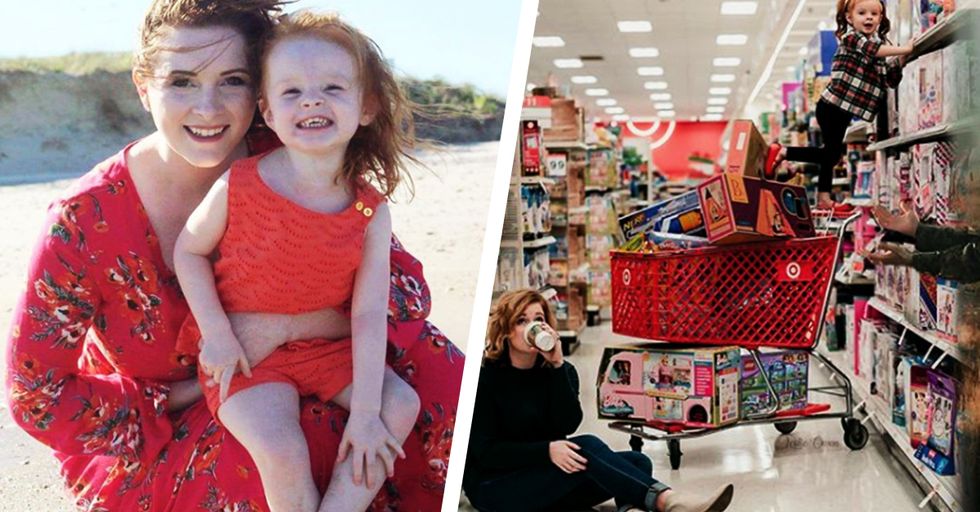 To Everyone's Surprise, This Woman Managed to Include Her Deployed Military Husband in Their Christmas Card

The holidays can feel overwhelming, and that's just a fact. While yes, it's supposed to be a joyous season filled with all things cozy and calm, it's usually quite the opposite. The shopping! The consumerism! The absolute stress of the mall!

But when it comes down to it, the holidays are really just about one thing: family. Not every family gets to spend Christmas together...which means creative measures need to be taken in order to still feel close.

They're a North Carolina-based couple, and they're a proud military family. Currently, Andrew is deployed. So the couple decided to think outside the box when it came to their Christmas card.

Now that is an amazing Christmas card!

Photographed by Leslie Owen, the photo is all sorts of adorable. But, as Owen points out, it also sheds some serious light on military families during the holidays and the sacrifices they make.

Even though the three of them could not be together during the holidays, Smith knew she wanted to find a way to incorporate her husband into the card.

Especially because it meant that Andrew could be in a photo with their 3-year-old daughter, Charlotte. Smith told TODAY, "I would love to have him home for the holidays, and I know it’s not possible this year. But this card gives him a chance to be part of our Christmas." We're not crying, you're crying!

Last year, even though he had been deployed, Andrew managed to make it home two days before Christmas.

This year, however, it just wasn't in the cards for them. Smith explained, "Charlotte kept saying, 'Santa brought you home.' So when we knew he was going to be gone again this year and there was no chance he'd be back in time, my daughter told my husband, 'All I really want you to be is safe.'" Someone please pass us the tissues.

It was actually the photographer's idea to feature Smith and Charlotte in their favorite store--Target.

And thanks to Photoshop, they now have an adorable Christmas card with all three of them. Unsurprisingly, the photo touched tons of people and went viral...

Sometimes the simplest things can be the most meaningful.

There's also the fact that so many families are dealing with deployment, but nobody is really talking about it anymore.

As Smith points out, "I guess the message brings awareness to something that so many people in military families are going through but has gotten forgotten. It’s not in our daily news feeds anymore that people are still being deployed." It reminds us of all the sacrifices military families are dealing with that most of us don't understand.

Smith, a lifestyle blogger, is candid in her Instagram posts about being a military wife and dealing with deployment.

As she writes in one caption, "Somedays when we are missing Andrew, we look through pictures and Charlotte tells me her favorite moments from that particular day and I share mine..." She's incredibly open in her posts and it's clear why people respond so positively to them. They're relatable and honest.

It's lovely to see someone so positive spreading their encouragement and inspiration.

Especially during the holidays, when it's easy to get sidetracked and sidelined by the pressure and stress of...well, everything. Smith's posts and Christmas cards remind us all the true spirit of the season.

And it all comes back to one thing...

Family. All it takes is one peruse down her Instagram page to feel the love radiating from each post. We love her holiday card and wish the Smith family a very Merry Christmas!