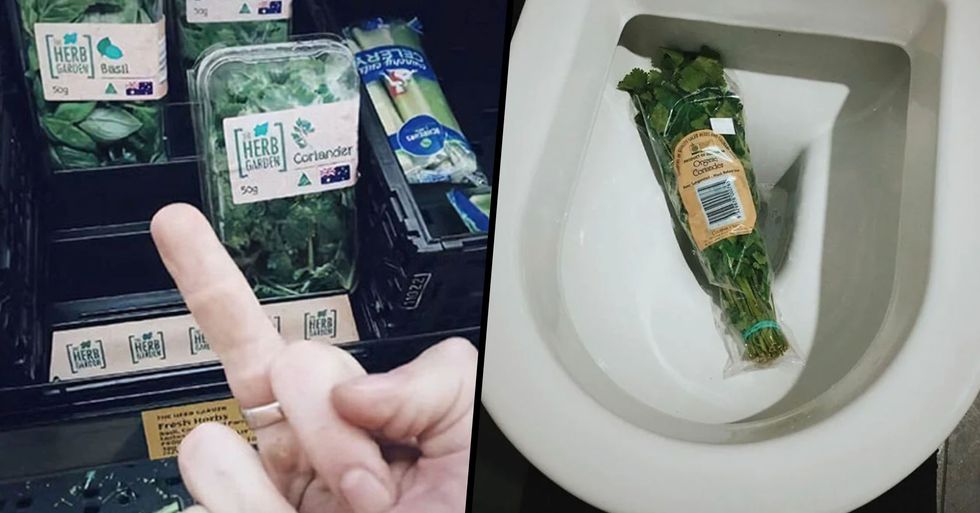 Folks, it's the day we never thought would exist... International "I Hate Cilantro" Day.

Now, we all know someone who holds an avid distaste for the pungent green herb, but we never thought the hatred would go as far as getting its own formally recognized "international day."

Keep scrolling for the full story, and to hear about the huge online community of global cilantro haters.

You either love it or you hate it.

This peculiar green herb has divided the nation for decades...

With people either drowning their recipes in the stuff or despising the mere smell of it.

And makes the perfect, yet pungent, garnish for various different curries.

Well, for most of us it does.

Despite the overwhelming popularity of this herb, there are just as many people out there who can't stand the smell, sight, or taste of the stuff.

Admittedly, cilantro does have a rather unusual flavor...

When put into words, I'd describe the herb as having a floral, almost perfume-like aroma and taste.

It sounds pretty disgusting, doesn't it?

Well, I for one adore cilantro, and I certainly don't think it deserves all the hate it receives.

But there are many avid cilantro haters out there...

Who are extremely passionate over their distaste for the stuff.

But why do such a select group of people hold such passionate hatred for the plant?

Genetics may just be the answer.

Studies have found that a person's genetic make-up could be the answer to their preference for cilantro.

Professor Russell Keast, who specializes in sensory and food science at Deakin University’s School of Exercise and Nutrition Sciences, explained: "Sense of smell is highly variable between people, so what I experience may not be what you experience, and this can be due to quantity, type and natural variations with smell receptors."

A person's smell receptors determine the flavor of the herb.

So, while some will get an aromatic, herby flavor, others are likely to experience a pungent, soap-like taste. Science.

A scientific study only cemented this theory further...

The genetic testing company, 23andMe, surveyed 50,000 of their customers a couple of years ago, asking whether they liked the taste of cilantro or found it to be soapy.

And the results spoke for themselves.

Those who reported to not like the flavor were found to all have the same genetic variation in their DNA.

So it isn't your fault if you don't enjoy the plant.

And this finding, if anything, made cilantro haters even more passionate about their dislike over the herb.

And some were so dedicated to their hatred...

That they started up their own online community.

The Facebook page, I Hate Coriander was launched back in 2013...

And has since gained over 260,000 Facebook likes from cilantro haters all across the globe. FYI: Coriander is what the Brits call cilantro. Weird, I know.

The group was initially started as a joke...

And would revolve primarily around silly cilantro-based posts, such as taking photos of the plant in toilets and bins.

Even as a fulltime cilantro lover myself, I have to admit that the whole thing is very amusing.

For the first couple of years, the page simply reposted people's creative ways of showing their distaste for the herb - For example, take this woman's valiant efforts at flipping off a bunch of cilantro. 10/10 for effort.

But, as the anti-cilantro movement grew...

So did their brand.

I Hate Coriander has become much more than just a Facebook page...

And even sells cilantro hating merchandise for all those who despise the plant to buy and enjoy.

It's all rather ridiculous...

But hey, someone has to make a living out of this stuff, right?

And, while the group has been busy selling their cilantro emblazoned t-shirts and mugs...

They somehow managed to create their own "national day".

Is the official "I Hate Coriander" Day.

Finally, after years of hard work, cilantro haters all over the world have their recognition.

Writing on their Instagram page, the administrator of the event explained: "A few years ago we decided to declare February 24th as the official, international ‘I Hate Coriander’ day."

On this day, cilantro haters can unite...

And no longer feel alone in their hatred of the pungent plant.

"Needless to say, the legacy lives on, so today, tell a coriander loving friend, family member, colleague... even your postman if he loves it, to get in the bin where they belong alongside the Devil’s ‘Erb." For some of the best cilantro memes on the page, keep scrolling...