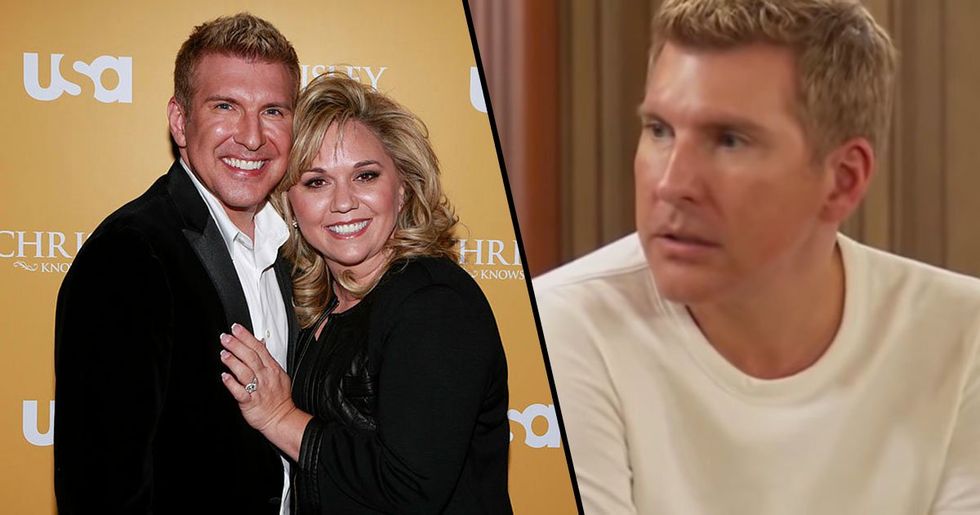 Todd and Julie Chrisley Hand Themselves in to FBI

If there's one thing that we all should be doing, it's paying our taxes. Don't bother trying to commit fraud because it's just going to bite you in the backside. However, it seems as if some people are ready to take that risk. Usually, you would expect it to be the people who are strapped for cash that are committing these kinds of crimes, but you'd be surprised to find that it's primarily the wealthy folk in society.

Recently, reality TV stars, Todd and Julie Chrisley, have been indicted on tax evasion charges, though Todd almost immediately claimed that they were innocent.

And now it looks like they are going to face the charges head-on because the pair have just handed themselves in to the FBI and entered their plea...

If you don't know, this is Todd Chrisley.

He, along with his family, has been starring in the show for 5 years now!

The show focuses on following the extremely southern family as they battle the daily struggles of maintaining a healthy family life as well as "having fun" while doing so.

It's given us some of the best reality TV show moments ever!

And with the introduction of Season 7, it only got more hectic, as each family member (including the nanny!) gets their own storyline.

When Todd told Grayson, his son, that he could not drink the soda but he did it anyway while maintaining full eye-contact with his father? Simple, but impactful.

I'll give it to you, that takes some guts, son!

The look on Todd's face made this such an iconic moment for the show!

The nation seems pretty fond of him, too.

The show generally gets positive reviews, with some people claiming that it's so much better than watching any of the Kardashians.

And this user expressed how upset they would be if they canceled the show.

You might as well get those tissues ready, because this news isn't good.

News broke yesterday that the two main members of the family, Todd and Julie Chrisley, are being indicted for tax evasion and fraud.

There have even been charges against their accountant!

Peter Tarantino, the family's accountant is also being questioned for his involvement in the alleged crime.

A federal grand jury in Atlanta indicted them even despite their claims that this allegation was false.

On Tuesday, both reality stars were charged with multiple offenses including conspiracy, bank fraud, wire fraud, and tax evasion. Yikes.

The Attorney's Office has claimed that the pair have defrauded banks...

And this is what allowed them to obtain millions in loans to spend frivolously. They have also claimed that the couple have cheated taxpayers by avoiding federal taxes on the money they earned.

The prosecutors have traced evidence all the way back to 2007...

Throughout their careers, they have been fabricating documents and also providing false information to firms and banks in order to receive large sums of money.

These funds were then blown on their lavish lifestyles...

And it seems like people had been noticing this for a while now...

Apparently, the family were spending thousands just on clothes!

It's no wonder that they needed so many loans!

People have quickly turned on the reality stars upon hearing the news...

That's a good name suggestion for the next season if it doesn't get canceled...

I agree, it's pretty risky business...

It can only go downhill from here...

However, Todd has denied everything, saying that he's being set-up.

In a lengthy Instagram post, which weirdly featured a nice ol' promo picture of the family, the reality star decided to explain himself and the story sounds like a storyline from one of their episodes, to be honest. But regardless, he denied all of the allegations.

Apparently, he and his family are being targeted by a former employee of theirs.

According to his side of the story, an ex-employee, who he did not name in the post, is out to destroy the family and everything they have in retaliation to being caught stealing from them. He writes: "We fired the guy and took him to court and that's when the real trouble started."

So it looks like they didn't take well to the termination...

As an act of revenge, this said employee decided to take "phony documents" to the U.S. Attorney's Office and told them [he] had committed all kinds of financial crimes." He then ended the post saying that he shared all this with his 1.9 million followers because he's got nothing to be ashamed of.

But now there's been an update on the scandal.

Just 1 day after they were indicted, the pair have reportedly surrendered themselves to the FBI in Atlanta. This is about to get very interesting...

According to local reports, the Chrisleys came in on their own accord and were taken into custody.

They were then taken into court yesterday for a bond-hearing, where they entered a plea.

The pair have pleaded not guilty...

Following their plea, Todd and Julie will now each be released on $100,000 unsecured appearance bonds.

But that's not the only thing.

New (thread): Here’s a sketch of Todd and Julie Chrisley with their separate attorneys during arraignment this afte… https://t.co/dZeCqghA87
— Nicole Carr (@Nicole Carr)1565811017.0

Their travel will also be restricted to the Atlanta area and parts of Tennessee.

However, there is an exception...

The couple are allowed to travel to California to film their reality show, but they must notify their probation officers before doing so.

And so the story unfolds...

Let's just sit back and watch. If the family really have been avoiding taxes, then the evidence will speak for itself and Todd will look like an idiot for his post claiming his innocence. Either way, I feel like this would make the perfect storyline for Season 8 of Chrisley Knows Best, am I right? Fancy a more lighthearted story about fraud? One restaurant was caught passing off Popeyes chicken off as their own. Keep reading for more on that!
20%