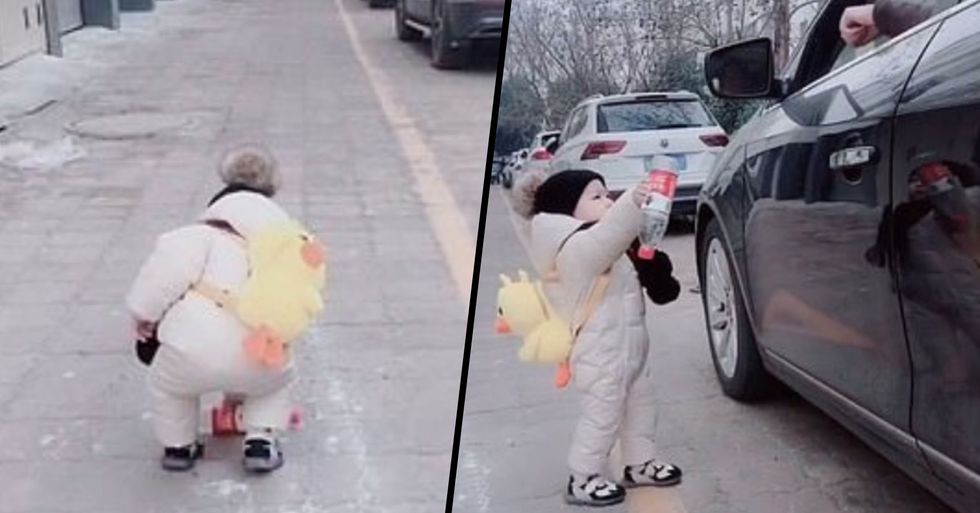 Toddler Shames Driver Who Threw a Plastic Bottle Onto Sidewalk

You know you need to get your life in order when a toddler is making an example out of you.

A video from China has gone viral after it showed a toddler defiantly picking up a plastic bottle that had just been thrown from a car window, and marching after the culprit to return it to him - The battle against single-use plastic at it's finest.

Keep scrolling for the full story, and to see the adorable video for yourself.

We should all, by now, be aware of the devastating effects plastic has on our planet.

The material, which is not biodegradable or recyclable, has been clogging up our oceans, littering our environments, and suffocating our animals for decades.

Our use of plastic has spiralled out of control...

About one trillion single-use plastic bags are used annually across the globe, and more than half a billion plastic straws are used every day.

But the biggest culprit?

More than sixty million plastic bottles end up in landfills every year...

And the ones that avoid this fate end up on our beaches and in our oceans.

But efforts to clear up our planet of this plastic waste are higher than ever before.

In recent years, more and more people have been taking to beaches and other damaged areas to rid the ground and the oceans of single-use plastic waste.

And the use of reusable alternatives to plastic are on the rise...

More people are cutting down on their plastic use by investing in environmentally-friendly alternatives, such as reusable water bottles and coffee cups.

But despite all the good these volunteers do, there are still people out there who seemingly don't care about saving our planet.

So many people still insist on using single-use plastic...

And, even worse so, there are still people out there who litter this plastic in the street.

These litterbugs need to be held accountable for their actions...

And this happened to one man in China perfectly.

A man in the city of Jining in eastern China chose to litter his plastic bottle at the wrong moment...

Because one passionate little eco-warrior happened to be walking past and didn't let his actions go by unresolved.

Jiarui, who is only just over one-year-old, was taking a walk with his mom in the city when someone littered their plastic bottle from their car, which was parked nearby.

And picked up after the litterer. Luckily, his mom, Jing Lulu, has got into the habit of filming her son learning to walk whenever they go out, so the thirty-four-year-old woman happened to record the full incident by chance.

The incident was captured perfectly.

And was uploaded to the Chinese social media website, Douyin, where it was quick to go viral. "That day, he probably thought the bottle had fallen from the car by accident. He is a very simple child. If he sees other people drop stuff, he always helps to pick up," his mom explained to the Mail Online.

The bottle was thrown directly in Jiarui's path.

Donning an adorable bodysuit and yellow bird backpack, the toddler can be seen walking along the sidewalk as an empty plastic bottle is thrown out of a car, which is sat stationary just ahead.

As the bottle is thrown to the floor...

Jiarui suddenly hurries over to it and bends down to pick it up.

He then defiantly marches over to the parked car...

And thrusts the bottle back up towards the window.

A hand is seen cautiously emerging from the car window...

And the driver, who is not seen throughout the clip, takes the bottle back from the child's hand.

And, despite the likelihood of little Jiarui knowing anything about the damaging effects of plastic being slim, his actions have made a difference nonetheless. "He is only one year and three months old and probably doesn't have a strong sense of environmental protection, but his action taught the driver a lesson," Ms. Jing explained.

Surely, the embarrassment of being told off by a toddler will do the trick...

Which should serve as a poignant reminder to you all... If a toddler knows not to litter, you should too! There are many ways in which you can stop people from wasting plastic... And one of them is to threaten them with cutouts of the Swedish activist, Greta Thunberg. Keep scrolling for the full story...