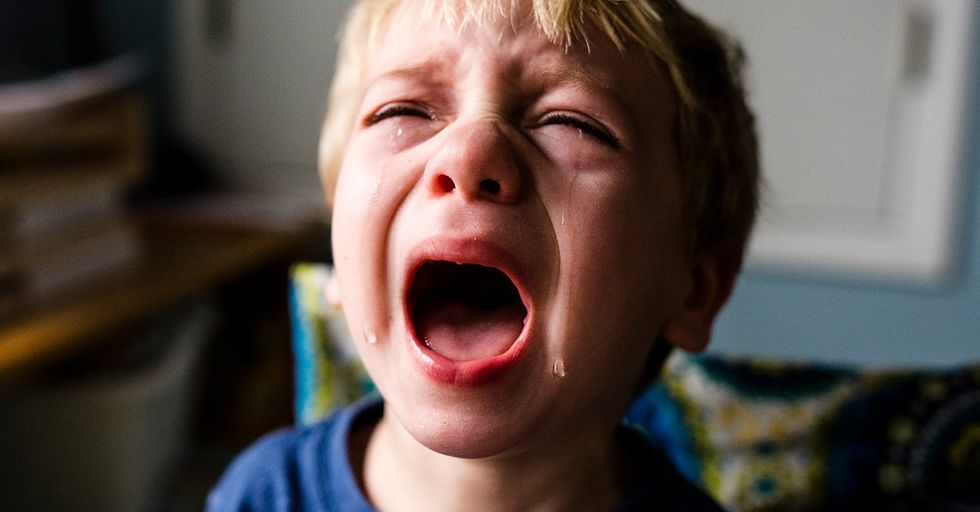 People Are Sharing What Caused Their Toddler's Most Recent Meltdown

Kids freak out about the darnedest things.

I remember when one of my younger brothers was little, he freaked out after learning that our uncle had hair growing on his arm. When we told him that he'd probably have arm hair one day, well, he was inconsolable.

There are plenty of perks to having kids, but I think one of them is being able to spend time with someone who says and does hilarious things without even realizing it. On the other hand, having kids (or being around them regularly) also means that you may be subject to temper tantrums that make absolutely no sense whatsoever.

A recent AskReddit thread asked parents to share the most ridiculous thing their toddler had thrown a tantrum about recently. It got so many hilarious answers. Here are some of our faves!

Inconsolably screaming: I WANT NOTHING! –XenusMom

The cat cheated in a game they were playing. –johnyann

Now I want to know, too.

I would have done the same thing.

I blew up a glove to make a balloon and drew a turkey face on it. 2yo: screaming hysterically MAKE IT NOT A BALLOON!!! Me: *pokes hole to let air out* 2yo: NO NO NO...THE TURKEY, THE TURKEY IS DEAD! NOOOO! *Rage screams for 40 minutes.* –Rava3396

Yesterday, our youngest son (1.5 years old) had a meltdown because I wouldn't let him pour his apple juice on the cat. I saw him start to do so, grabbed his cup, he just looked at me with a mixture of anger and sadness and cried "bath" for about 10 minutes. Our cat is amazing with children but even she wouldn't appreciate an apple juice bath. –BrittanyBallistic

We didn't have the hamburger bun color in our 120 colored pencil set. –mryazzieyazz

My two-year-old son heard my wife crumble up a receipt in the car tonight and for the next hour lost his mind that we had a cookie we were holding out on him. No amount of explaining could fix the situation. –flypaper1001

Mark is such a good name for a cow, though.

This is so sad!

She just started crying and said I broke her heart. After a few times of asking and calming her down, she told me it was because I ruined her birthday. Her birthday had been like 8 months before. I tried asking her how I ruined her birthday, but those were the only two sentences she would say. –ClearBunnie

I've got good news for you!

I would have loved to see this.

2 AM, 2 year old wakes up due to a bad dream. Asks his mother to put the “blanket up" i.e., cover him with the blanket. She proceeds to do so and he yells “NOT LIKE THIS, LIKE THIS!" and holds the blanket six inches above his body. So my wife takes the blanket and holds it above him, then lets it go and it falls. He gets mad. “LIKE THISSSSSS!" He expected my wife to be able to make the blanket float six inches above him for the entire night. 30 minutes of crying later he conceded that he had lost his fight against gravity and passed out. –BoilerUp218

At least the dog was happy!

My daughter dropped a pretzel and the dog ate it. She started bawling and threw her entire cup of pretzels on the floor. Spoiler alert: the dog at those too. –PicaRuler

Quick! Get in the time machine!

My girlfriend texted me when she was looking after her 3-year-old brother: Josh is crying because he doesn't want a ice cream. He already finished eating it. This was 15 minutes ago. –KingGumboot

Don't know how to help you with that one.

My two-year-old screamed bloody murder every time she finished the water I poured into her cup. She literally got mad because SHE drank all her water. –justVinnyZee

How could you let this happen?!

My 18-month old insisted on drinking water from an open cup while lying on her back. I tried to explain that it would spill but then gave up so she could learn for herself. Cue meltdown when she got covered in water. –2371341056

Now that you mention it...

The trees are taller than our house. –gerberner

She started crying because she didn't get to go to her parent's wedding. Which happened 7 years before she was born. –LaziestGirl

He was talking about the biv, obviously.

I was driving to the store and from his car seat in the back, my toddler yelled at me, “I want the biv!" He then proceeded to melt down about the “biv." I attempted to figure out what in the world he was talking about, but had no luck. “What is a biv? I don’t know what you are talking about. Can you point at it? What is a biv?" He paused for a moment, then admitted reluctantly, “I forgot the word." I still don’t know what he was talking about. –monker5000

That my mom was not my mom but her grandma. –ApplesPeaches

I love the end of this one:

Her paintbrush wasn't green. Mind you, there was a green paintbrush available within reach, but the fact that the one in her hand wasn't green was a problem, and "I can't make this one green for you" was unacceptable. She did eventually relent and decide it was ok to just pretend the red one was green. –InannasPocket

Now he has to start all over.

He loved being tickled so I was tickling him one day. He let out a huge fart and suddenly started crying and screaming. I ask him why he’s screaming and he replies with: "I was saving that for later!" How and why would you save a fart? –ShutTheFrontDoor__

I kinda get this one.

Elevators. My kid thinks people get on them to die! I have shown her that it’s OK, even ridden one up and down with her (while she screamed the entire time). I just don’t get it. She yells at people not to get on the elevator! Screeches and is terrified if someone she loves gets on one. –Tassidar

That's a tricky one.

My wife is 4 months older than I am. My 4-year-old daughter got upset with me because she wanted me to be older than my wife. –amishpapa

The only reasonable response.

She pointed to the fridge and said, “Milk!" Filled her cup with milk and handed it to her. She took one sip, threw it on the ground, and screeched, “JUICE!" Left her to writhe and cry on the floor. –chelsleebee

I wouldn't let him get in the car parked next to us. Buddy, it's not our car! –jeannes83

When my nephew was a toddler he asked my sister if she drank soda while she was pregnant with him. She said that she did have a glass or two and he freaked out and cried for an hour because “babies can’t drink Dr. Pepper it’s not healthy! Only milk!" They got him settled down and he asked if she ate Cheez-its when she was pregnant. She said “oh, no. Babies only drink milk so I didn’t eat Cheez-its." He cried harder because “I would have probably liked to have some Cheez-its!" Meltdown for another hour. –De_La_Bodega

My niece was having a tantrum, and I laughed and said: "You need a nap." "NO, YOU NEED A NAP!" I laughed hard at that.–Arocket33r

He loves hats. He was very upset because he wanted to wear two hats. At once. To bed. –SailorJupiter80

My kid was screaming at his balloons for an hour because they wouldn't stop floating. –PRNmeds Share this with someone who has kids!