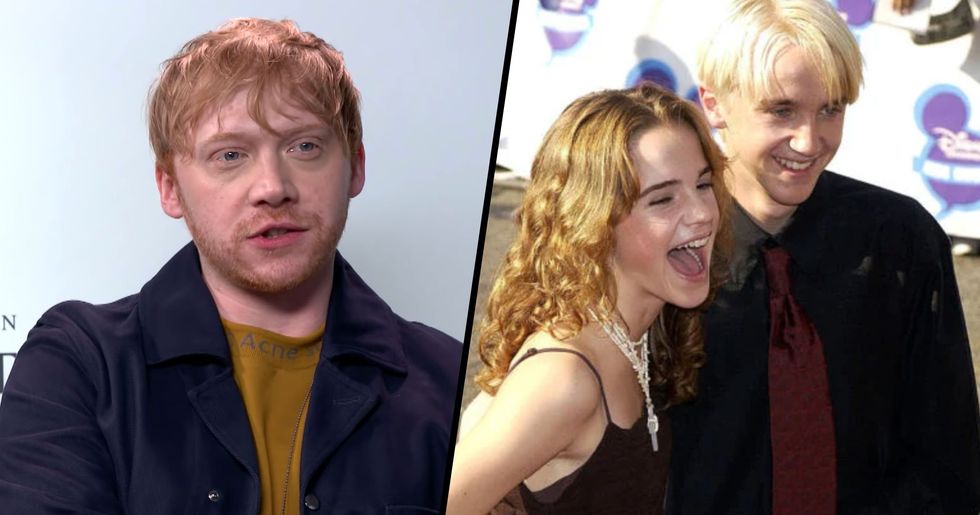 Harry Potter fans have long held a torch for a slightly odd couple from the franchise. We never thought that we'd ship Draco with Hermione (especially after that punch) - but the internet works in mysterious ways, so here we are.

Tom Felton and Emma Watson have maintained a close friendship since the film franchise finished in 2011. But, for a long time, fans have suspected that they're more than just good friends. The pair have been spotted hanging out a lot on social media - but one post, in particular, seemed to suggest that a potential romance is on the cards.  And now fellow Harry Potter star Rupert Grint has confirmed what fans always knew in their hearts.

Read on for Emma Watson and Tom Felton's "love story" so far.

Born in Paris in 1990, Emma Watson is a super successful young actress.

You may recognize her from movies like The Perks of Being a Wallflower, Bling Ring, and the much-anticipated Little Women.

Tom Felton, born in the U.K. in 1987, is also in the entertainment industry.

Although he's not as much of a household name as Emma Watson, he's still enjoyed a good amount of success, starring in The Rise of the Planet of the Apes, plus dipping his toe into the music industry.

But, in spite of their other ventures, there's one thing that both Watson and Felton will always be known for.

The pair found fame at a really young age in the Harry Potter movie franchise. Based on the popular book series by J.K. Rowling, the movies follow a group of young witches and wizards in a school for magic.

Hermione is the best friend to lead character, Harry, and manages to save them from all manner of scrapes with her impressive intellect.

While Felton had quite a different role.

He played spoiled mommy's boy, Draco Malfoy, who essentially acts as Harry's main enemy throughout the series (except for He Who Must Not Be Named, that is).

Malfoy is kind of the worst.

He consistently bullies Harry for having famous parents, hates on lovable Ron Weasely for being from a poorer family, and, of course, despises Hermione, as she's muggle-born.

The majority of the Harry Potter story centers around the 3 best friends.

After all, it's these 3 who have to find and destroy all of the Horcruxes, through which Voldemort can finally be defeated, and the wizarding world can be at peace.

Along the way, they find love, too.

Throughout the movies, Ron and Hermione were in something of a "will they, won't they," relationship dynamic. The 2 were best friends - but seemed to have chemistry which suggested more.

Until the final book, that is.

When faced with imminent death, Ron and Hermione finally have to also face up to their feelings for one another, and they finally kiss in the Chamber of Secrets.

In the Harry Potter-verse, Ron and Hermione are soulmates.

In the flash-forward we see at the end of the story, the happy couple are still together, and are married with kids.

And Draco and Hermione do not get on.

Draco holds a traditional (and prejudiced) wizarding worldview - which is that witches and wizards born to muggles (non-magical folk) are somehow below the supposed "purebloods."

But in the third book, her patience with Malfoy finally wears too thin. As he laughs about the death of an innocent Hippogriff, Hermione does what every reader and audience member wants to.

She clocks him one. "Luckily she didn't actually clock me with her fist. She's got a bit of a mean right hook, Emma Watson," Felton revealed.

But something quite unexpected happened in the Harry Potter fandom.

Rather than "shipping" the perfect match of Ron and Hermione together, some started to believe that it was Hermione and Draco who were the true soulmates.

Yeah, we know, us neither.

But fandoms work in mysterious ways - and though we can't explain it, we just have to accept that there's a huge section of the internet that is dedicated to Dramione.

Which comes with all the usual trappings.

And the shipping doesn't end there.

There's also the real-life ship of Felston (Felton plus Watson). It all started when Emma revealed that, "for the first two movies, I had a huge crush on Tom Felton. He was my first crush."

Who can blame her?

Young Draco represented a lot of millennials' first crush, after all. According to Emma, "he totally knows. We talked about it – we still laugh about it."

The pair seemed close back then.

And it seems like they still are, now. "We are really good friends now, and that's cool," Emma confirmed.

Tom then offered his side of the story.

But when asked if his feelings for Emma were mutual, he got all coy, and eventually stammered, "er, uh, um, no." The plot thickens.

Either way, Emma's admission just added fuel to the fire.

Either way, the pair remained close.

Speaking to Us Weekly, Tom gushed, "Lovely Emma. We do see each other quite a lot actually. We just don’t always post pictures about it."

And he seemed keen to tantalize the shippers.

"Everyone loves the reunion of it. We’re reuniting all the time we just don’t always post it on Instagram," he revealed.

Tom was also rather complimentary.

"So yeah, that was fun. I always enjoy spending time with her," he smiled.

The pair's friendship set the internet on fire.

And many out there believe that there's more to this bond than meets the eye - and insist that the 2 are actually secretly dating.

The past few months have been very exciting for Felston shippers.

Last November, Emma shared this pic on her Insta. "She was in my neighborhood and I hadn’t seen her for a few months. And I decided to take her for a skateboarding lesson, which she was very good at. She’s quite hard on herself. But she’s actually very good at it," explained Tom.

In February, Emma shared this snap, with the caption "Friends capture you best 🦋." Hmmm ... "friends," you say, Emma?

But it's their latest post that has really convinced shippers.

It seems like the pair have taken a vacation together to South Africa - and while there, Tom shared this incredibly cute and undeniably couple-y shot.

And people online are losing their minds.

Sure, they could be just good friends. But they're so cute together!

The comments on Tom's latest Emma-based Insta post prove that the world wants Feltson to be real!

And now even more proof has surfaced.

Rupert Grint, who played Hermione's actual love interest, Ron, in the series has spoken up on the romance.

In an interview, Grint confirmed what Dramione shippers knew all along.

That there is (or was) something between Felton and Watson. We knew it!

He says he noticed the connection the 2 had.

"There was always something. There was a little bit of a spark."

But as to whether it has developed into anything now?

Grint isn't sure. "We were kids. It was like any kind of playground romance," he explained.

It seems the Dramione dream is still alive!

We can still hope for the future, right? And, hey, if Dramione doesn't entice you, keep scrolling for more incredible Harry Potter fan theories.