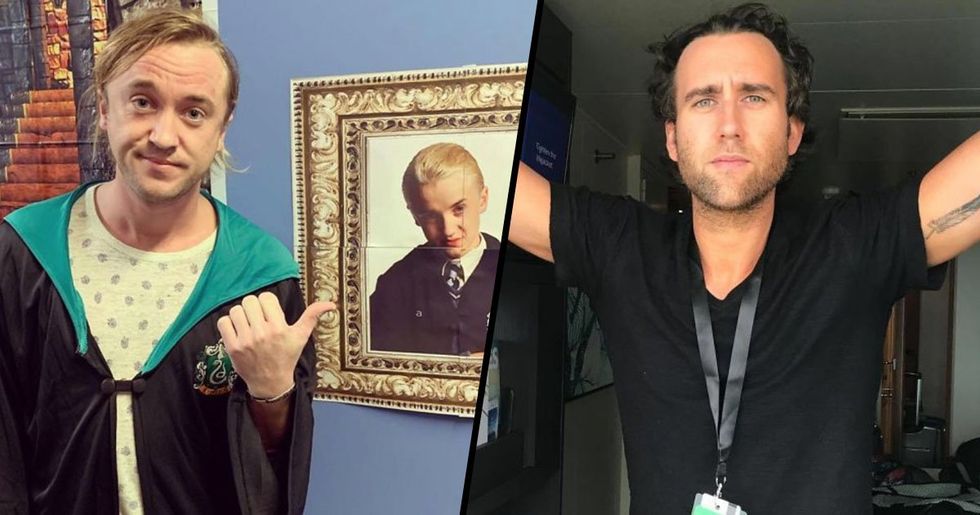 Yes, we've been teased with a couple of spin-offs (Fantastic Beasts and Where to Find Them, to be precise...) but apart from that, we've been sat, twiddling our thumbs, eagerly awaiting the return of our favorite wizard gang to make a re-appearance. And they don't even have to be wizards at this point. We just need to see some new content!

And our prayers might have been answered because Draco Malfoy and Neville Longbottom have had a hilarious clash on the internet which has really made fans laugh...

There are 7 Harry Potter books in total.

The tales were simply magical.

It's no wonder everyone wanted to be a part of it.

Questions were being thrown all over the place.

"Where are they now?" "Do they still talk to each other?" "Are they all friends?"

Tom has been regularly spotted with various members of the Harry Potter cast...

And earlier this year he posted a photo of himself with the Weasley brothers with the simple caption, "Lads."

He's also been reunited with Neville Longbottom on multiple occasions...

Or Matthew Lewis, as he's known in the muggle world. This was the iconic moment when he tried to convert the Gryfindor native to the dark side.

And recently, the two have given Harry Potter fans more to laugh about.

Tom Felton decided to post an Instagram photo of himself next to a picture of himself from almost two decades ago with the caption "Ageings a b****."

And obviously, Matthew Lewis hopped into the comment section to leave his opinion.

"Speak for yourself lad," he wrote.

Besides his acting career, Matthew is known for his amazing "glow-up."

A "glow-up" refers to one getting better looking as they age. Some even refer to the entire process as "Longbottoming" literally because of Matthew.

I mean, you have to admit, Matthew is like a fine wine.

He just got better with time.

Everyone seems to agree.

One user couldn't believe how attractive he has gotten. She wrote: "I'm really proud/confused/upset Matthew Lewis grew up to be the most attractive of the Harry Potter cast."

And so does Tom Fletcher, a member from the British band McFly. And that's all that matters.

If you're in the mood to read some more Harry Potter-related content then keep scrolling...

Read all about the little things that even Potterheads missed out on throughout the films. I guarantee you'll have to re-watch the entire franchise to pin-point these details...